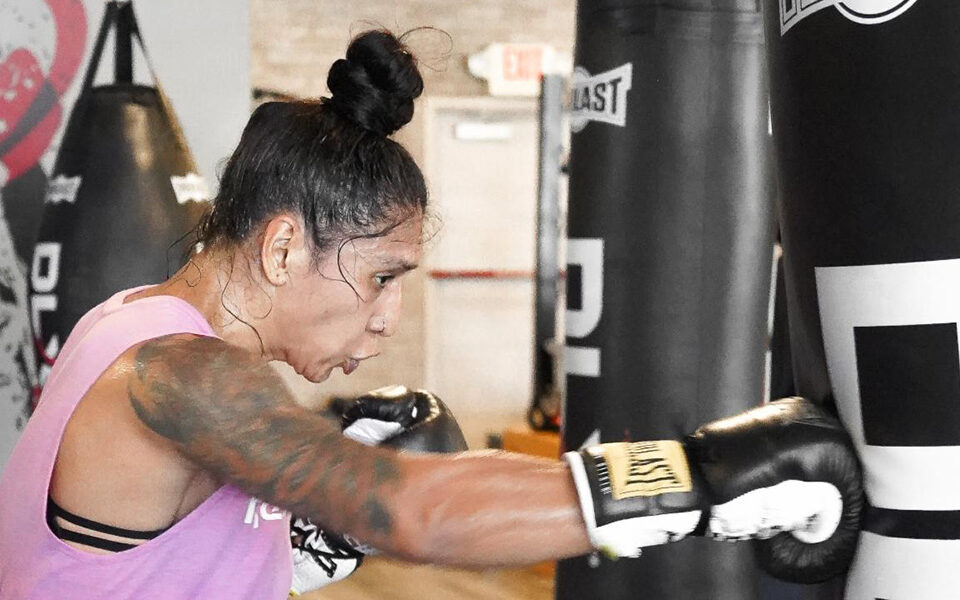 When Alma Ibarra steps into the ring at Sycuan Casino Resort tomorrow night, as part of DiBella Entertainment’s Broadway Boxing event, live on UFC FIGHT PASS®, the world will meet a woman who has been dealt as tough a hand as anyone at the poker tables outside the doors of the casino’s Heritage Event Center. They will meet a fighter who has faced adversity at every turn throughout her boxing career and fights now for an opportunity to become the first Mexican female unified world champion.

The 33-year-old single mother began fighting at 19 years old. She originally stepped into the ring to lose weight, but soon found her calling between the ropes. At age 25, she gave birth to a son, Matthias, who was born with hemophilia, a condition that prevents his blood from clotting properly, and makes every scratch a medical emergency.

“How can I keep him from being a kid?” Ibarra lamented. “He wants to skateboard. He wants to fight. When I told him he can’t skateboard, that he can get hurt, he reminded me that I get punched in the face for a living. How can I be his hero and then not allow him to do the things that I do?”

Matthias loves to skateboard, and in March 2020, he had a minor accident that landed him in the hospital for two weeks. It was during the time that Ibarra was fighting to qualify to represent Mexico in the 2020 Olympic Games in Tokyo.

The night before her qualifying bout in Veracruz, Mexico, Ibarra received a call to her hotel room from the police. There was a threat against her, and she needed to meet officers outside the hotel to ensure her safety. She did as she was asked, walking out the front door of the hotel and to a waiting SUV that signaled her with its lights.

Once inside, Ibarra quickly figured out that the people that had taken her were not, in fact, the police, but kidnappers, looking for ransom. They drove her to a hotel a few blocks away and took her phone to call her friends and family. Twenty hours later, and a ransom not secured, Ibarra asked for something to eat. Her captors ordered pizza, but the consummate athlete refused to eat it.

The kidnappers who, until then, had been kind, all things considered, became angry, and began roughing her up, slapping her and throwing her against the wall. She stayed quiet from then on out, wondering if she’d survive the ordeal.

After looking at security camera footage, the real police tracked the SUV to a hotel just three blocks away from hers and rescued her.

Ready to get back to qualifying, Ibarra and her manager, Hector Fernandez de Cordova, implored the Mexican National Officials to allow her to fight, but they refused. Despite having been kidnapped and held for over 20 hours, she was deemed a “no call, no show,” and was disqualified.

After the ordeal, she returned to her son’s hospital bedside, and upon his release a week later, she implored Fernandez de Cordova to secure a fight as soon as possible.

“You don’t want to take a little time off after everything you’ve been through?” he asked her.

“No,” she answered. “I have a son and my parents to support. I need money. I need to get back in the ring. I need to break someone’s nose and get this anger out of my system.”

“She’s like Wonder Woman,” Fernandez de Cordova said of his charge. “She is so incredibly strong. She’s my hero and her son Matthias idolizes her.”

She and Fernandez de Cordova saw the light at the end of the tunnel when she defeated Maricela Cornejo in March. Both cried at the decision, not just because she had won, but because they knew the sacrifice and struggle had paid off.

This Friday, she carries the weight of her family, her team and her country into the ring as she seeks to secure the biggest fight of her career. The only thing standing in the way is Kandi Wyatt. Like all other obstacles, Ibarra plans to knock her down on her way to becoming a unified world champion.