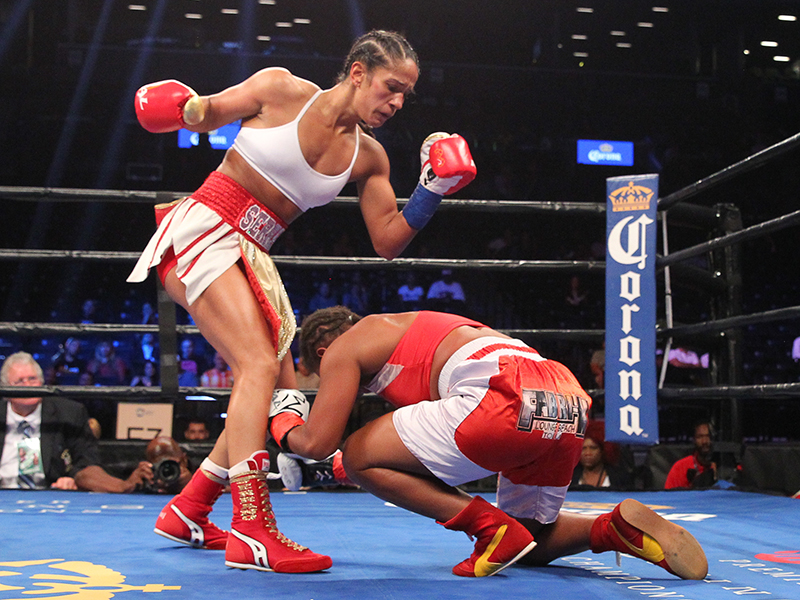 Featherweight World Champion Amanda Serrano Defends Her Title Against Colombia’s Calixta Silgado as Part of Stacked Night of Fights Saturday, July 30
at Barclays Center in Brooklyn
Tripleheader of Televised Events Headlined by Featherweight Title Clash Between
Leo Santa Cruz & Carl Frampton
Live on SHOWTIME at 9 p.m. ET/6 p.m. PT
BROOKLYN (July 12, 2016) – Brooklyn-native and WBO Featherweight World Champion Amanda Serrano (28-1-1, 21 KOs) will defend her title on a stacked night of action at Barclays Center as she takes on Colombia’s Calixta Silgado (14-6-3, 9 KOs) Saturday, July 30 in Brooklyn.
Serrano makes her Barclays Center debut in the first female world championship fight ever held at the venue. The event is headlined by featherweight world champion Leo Santa Cruz defending his belt against Irish star Carl Frampton in the SHOWTIME CHAMPIONSHIP BOXING main event. Televised coverage begins at 9 p.m. ET/6 p.m. PT and features former two-division world champion Mikey Garcia facing former world champion Elio Rojas and 154-pound contenders Tony Harrison and Sergey Rabchenko meeting in a world title eliminator.
“I couldn’t be happier about this opportunity,” said Serrano. “To be the first female fighter to defend her world title at Barclays Center is truly something special. This is one of the biggest cards of the year, and I am honored to be a part of it. I can’t wait to put on a spectacular show on July 30th, and I guarantee that this fight will not go the distance.”
“All the talk has been about Amanda being the first female fighter to defend a championship at Barclays, but I am coming to Brooklyn to win and to make history by becoming the first female to win a world title there,” said Silgado. “Amanda is one of the most feared punchers in boxing, but I do not fear her. This is my opportunity to shine and I plan on leaving that ring on July 30th with her championship belt around my waist.”
“Puerto Rican Brooklynite Amanda Serrano is absolutely one of the best female fighters on the planet,” said Lou DiBella, President of DiBella Entertainment. “She has tremendous skills, devastating power, and is always in exciting fights. Already a three-division world champion, WBO featherweight titlist Serrano will make history at the Barclays Center, on July 30‘s extraordinary card, when she becomes the first female boxer to defend her world title at the renowned venue.”
Tickets for the live event, which is promoted by DiBella Entertainment in association with Cyclone Promotions and presented by Premier Boxing Champions, start at $38 and are on sale now. Tickets can be purchased online by visiting www.ticketmaster.com, www.barclayscenter.com or by calling 1-800-745-3000. Tickets are also available at the American Express Box Office at Barclays Center. Group discounts are available by calling 844-BKLYN-GP.
Additional action on July 30 will feature an all-Brooklyn welterweight battle between two-time world champion Paulie Malignaggi and Gabriel Bracero in the main event of a SHOWTIME EXTREME doubleheader. Televised coverage begins at 7 p.m. ET/PT with a lightweight slugfest between Ivan Redkach and Tevin Farmer.
Raised in the Bushwick section of Brooklyn, Serrano gravitated toward boxing from watching her older sister Cindy, also a professional fighter. She picked the sport up quickly, amassing a 9-1 record during a brief amateur career that saw her win the New York Golden Gloves title in 2008. The 27-year-old would go on to fight all over the world, seizing her first world title in 2011 when she defeated Kimberly Connor to grab a super featherweight belt. In 2014, she went to Argentina and defeated Maria Elena Maderna to become a world champion at lightweight. Her latest world title campaign began in February when she stopped Olivia Gerula in the first round to capture her featherweight championship. She will be taking on the 28-year-old Silgado, out of Tolu, Colombia, who has tried four times to win a world title and who will be fighting in the U.S. for the second time on July 30.
# # #
Barclays Center’s BROOKLYN BOXING™ programming platform is presented by AARP.  For more information, visit www.SHO.com/Sports follow on Twitter @SHOSports, @LeoSantaCruz2, @RealCFrampton, @BarclaysCenter, and @Swanson_Comm or become a fan on Facebook at www.Facebook.com/SHOSports,www.Facebook.com/DiBellaEntertainment, www.Facebook.com/barclayscenter. PBC is sponsored by Corona, La Cerveza Mas Fina.
CONTACTS:
Swanson Communications: (202) 783-5500
DiBella Entertainment: (212) 947-2577
Chris DeBlasio, Showtime Networks Inc.: (212) 708-1633
Matt Donovan, Showtime Networks Inc.: (212) 708-1663
Flo Jocou, Showtime Networks Inc.: (212) 708-7319
John Beyrooty BZA/SHOWTIME: (562) 233-7477
John Cirillo/Cirillo World/Team Frampton, (914) 260-7436
Barry Baum, Barclays Center: (718) 942-9533
John Cirillo/Cirillo World/Team Frampton, (914) 260-7436
Credentials: www.magnamedia.com
Website Admin