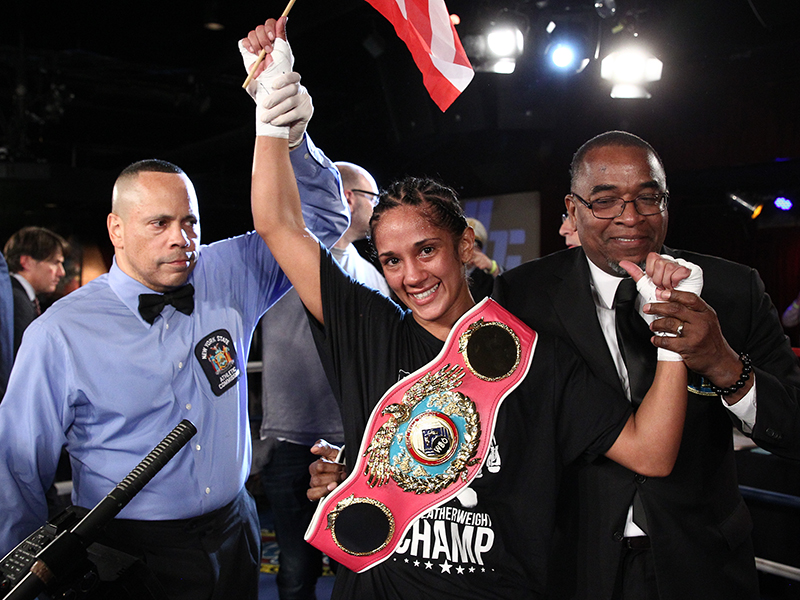 Headlining the card, Brooklyn’s female sensation Amanda Serrano, 126, demolished Canadian Olivia Gerula, 123¼, of Winnipeg, inside one round to pick up the WBO world featherweight championship. Serrano stormed out of her corner, quickly overwhelming her opponent with an onslaught of leather before a right hook wobbled Gerula into the ropes to warrant an eight-count. When the action resumed, Serrano immediately swarmed Gerula, finding a home for her overhand right and left hooks to stagger her adversary once again to force a stoppage call at just 1:50 into the contest. With the win, Serrano, 27-1-1 (20 KOs), is now a three-division world champion. Gerula, who had only been stopped twice before, but never this early, dropped to 17-16-2 (3 KOs). Serrano had previously won the IBF junior lightweight belt in 2011 and the WBO lightweight title in 2014.

Brooklyn junior welterweight southpaw Shemuel “The Chosen One” Pagan, 136½, put on an impressive performance against Oscar Santana, 136½, of Pomona, CA, in what was his first bout scheduled for six rounds. At the opening bell, Pagan burst out of his corner throwing punches with bad intentions, crowding his opponent and never letting Santana mount an effective attack. However, in round two, it was Santana who played the aggressor to which Pagan effortlessly worked to his advantage. With Santana leaning on Pagan, whose back was against the ropes, the Brooklynite landed a devastating left uppercut-right hook combination that dropped his foe hard. Santana arose but was deemed unable to continue by the referee 51 seconds into the frame, which evened out his record to 4-4-1 (2 KOs). With the victory, Pagan improved to 7-0 (4 KOs). As an amateur, Pagan was a five-time New York Golden Gloves champion as well as a 2008 Olympic team alternate.
Ukrainian Pavlo Ishchenko, 131, now living and training in Brooklyn and co-promoted by DiBella Entertainment and Fight Promotions Inc., was extended the distance for the first time as a pro, dominating Puerto Rican Rafael Vazquez, 130, Guaynabo, over six rounds. Hurting his foe with two hard left hooks early on in round one, Ishchenko stalked Vazquez throughout the contest. With each passing frame, Ishchenko methodically demoralized Vazquez with combinations and was stunningly effective landing countershots, particularly with his overhand right. When the final bell rang, the judges tallied 60-54, and 59-55 twice, all for Ishchenko by way of unanimous decision to up his record to 3-0 (2 KOs), while Vazquez dropped to 2-4. The colorful and charismatic Ishchenko was an outstanding amateur. A Ukrainian national, born in Russia, Ishchenko, who is half Jewish, compiled a 294-23 record that included a 2013 European AIBA championship and a trip to the 2012 Olympics in Great Britain.

Co-promoted by DiBella Entertainment and Maravilla Box Promotions, the superbly talented amateur prodigy Jonathan “Maravilla” Alonso, 139, returned stateside to face the rugged and determined Ricardo Maldonado, 139¾, of Renton, WA, in a six-round junior welterweight bout. Alonso used his superior speed and accuracy to dismantle Maldonado, landing pinpoint punches to the head and body each stanza. Alonso’s jab repeatedly broke through Maldonado’s guard and, once inside, a sustained attack to the midsection would follow. Though Alonso remained in control throughout, Maldonado never stopped trying, proving to be a very valuable test for the up-and-coming prospect. At the conclusion of the bout, the scorecards read 60-54, and 59-55 twice, to improve Alonso to 8-0 (4 KOs) via unanimous decision, while Maldonado hit the .500 mark at 5-5. Considered one of the best amateur boxers in Spain’s history, Alonso was born in Moca, Dominican Republic, but moved to Spain at just seven years old. He took up boxing as an amateur at the age of 16, compiling an 85-11 record, including having competed in the 2012 Olympics. He won gold medals at the Campeonato de España Junior tournament in 2009, as well as at the Campeonato de España tournament in 2011 and 2012. Alonso also picked up silver at Spain’s Golden Gloves tournament and the Bosnian Tournament, both in 2011.
Southpaw Kazakh Dauren Yeleussinov, 161, now living and training in Brooklyn and co-promoted by DiBella Entertainment and Fight Promotions Inc., earned his third first-round stoppage over Bernard Thomas, 162, 5-3 (3 KOs), of Kansas City, MO. Yeleussinov immediately applied pressure and began banging to the body. He then followed up his body attack with a right hook to the chin to drop Thomas. When Thomas arose, Yeleussinov repeated the pattern to fell his adversary a second and final time with another hard right hook. The time of the stoppage was 1:50 of the opening round to improve Yeleussinov to 5-0 (4 KOs). Thomas’ record fell to 5-3 (3 KOs). Yeleussinov had an extensive amateur career that saw him compile a 397-23 record, with more than 100 knockouts. He is a four-time National champion for Kazakhstan and won gold twice at the Universiade Championships as well as at the National Junior Championships.
Website Admin