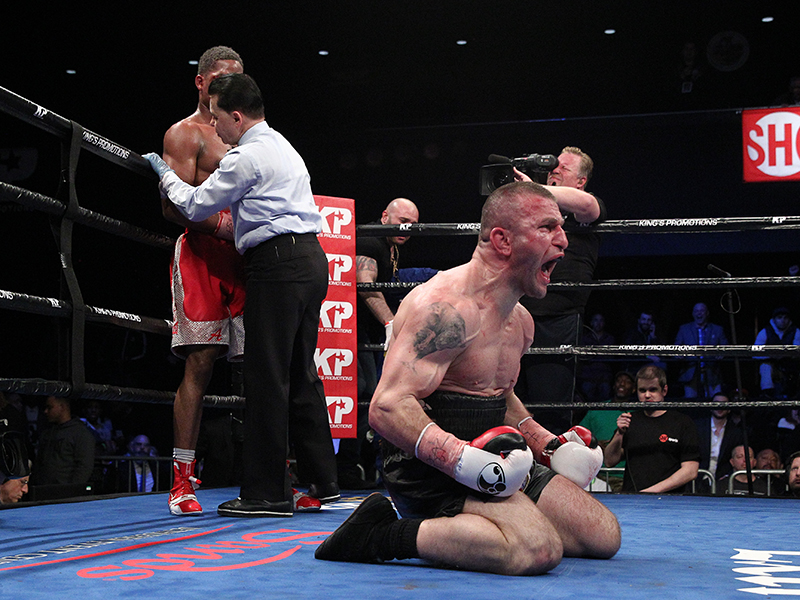 The 35-year-old “mini-Mike Tyson” plowed forward from the opening bell until the TKO at 0:33 of the 10th.  The 6-foot Douglas had no answer for his 5-foot-4 opponent, a Brooklyn-based native of Georgia who is looking to become the first world champion from the former Soviet nation.

Khurtsidze (32-2-2, 21 KOs) hurt Douglas (19-1-1, 13 KOs) with a big left in the opening seconds of the third round, sending the 23-year-old face forward through the ropes.  Somehow, Douglas recovered from the first knockdown of his career and fought himself back into the fight.  The Washington, D.C., native rallied to win the fourth and the fifth rounds, and the all-action sixth could have gone either way.

Khurtsidze opened the seventh with a monstrous one-punch left to floor Douglas, who again somehow survived the round on failing legs as Khurtsidze threw over 100 total punches.  Khurtsidze, who showed unbelievable stamina to push the pressure throughout, started the 10th with a relentless attack, forcing referee Benjy Esteves to stop the fight at 0:33 of the with Douglas defenseless against the ropes.

“I knew he was going to get tired,” said Khurtsidze, who took the fight on less than three weeks notice.  “I felt like I was going to catch him. He’s a good fighter, but he’s not strong.

“I knew he was going to be hungry. But I also knew that I was going to beat him.  It was short notice but I did everything I could in the time we had. I stayed in the gym and stayed sharp.

“Whoever they put in front me, I’m ready for them. I love fighting. I’ll fight anybody.”

Douglas had entered the fight as a fast-rising 160-pounder on the cusp of a title shot.

“I feel OK,” Douglas told SHOWTME Sports analyst Steve Farhood after the fight.  “He definitely dictated.  He definitely had a better day today.  It’s not discouraging, we just weren’t able to execute.  Naturally, I’m crushed.  It’s back to the drawing board.”