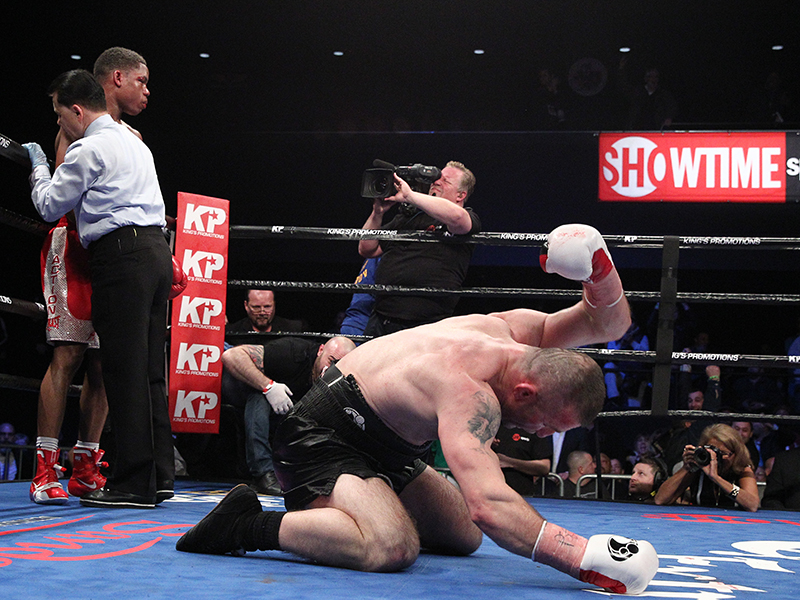 New York, NY (3/11/16) – The last two years have been somewhat of a roller coaster ride for Avtandil Khurtsidze. A native of Kutaisi, Georgia, Khurtsidze moved to Brooklyn at the beginning of 2014 to resume his promising boxing career that had been put on hold for two and a half years following his December 2011 win over Ossie Duran for the vacant WBC Silver middleweight championship. Khurtsidze signed with DiBella Entertainment and got his career back on track in July of that year. Over the next 13 months, Khurtsidze scored four consecutive knockout victories, as he awaited a shot against one of the top names in the 160lb. division.
Finally, it looked as though Khurtsidze would get his long awaited opportunity, having received an offer to face Hassan N’Dam in a rematch to take place in France last November for the #2 spot in the IBF rankings. N’Dam was the last fighter to defeat Khurtsidze when the Frenchman won a highly disputed majority decision over him for the interim WBA middleweight championship in October of 2010. However, the day that Khurtsidze was scheduled to fly to France was the same day that the tragic terrorist attacks occurred in Paris, and the bout was subsequently cancelled.
Frustrated, but not deterred, Khurtsidze stayed in the gym, preparing and waiting for his next opportunity. That opportunity came last Friday, when Khurtsidze, on just over two weeks notice, took a bout against highly regarded and undefeated prospect Antoine Douglas, as part of a special edition of the ShoBox series on SHOWTIME. The bout was supposed to be a showcase for Douglas, who was rated as high as #3 in the WBO as well as #6 in the WBA and #11 in the IBF, and who many boxing insiders felt was a fight or two away from challenging for a piece of the middleweight crown.

(Photo Credit: Ed Diller/DiBella Entertainment)
The moment that the bell sounded, Khurtsidze, who emulates Mike Tyson in style, stormed out of his corner and charged right at the young up-and-coming star. It was apparent from the opening round that Douglas was going to have his hands full. What ensued over the next nine-plus rounds was a brutal beating handed out by Khurtsidze, who dropped Douglas twice, once in the third and again in the seventh, on his way to scoring a 10th-round stoppage. Khurtsidze, now 32-2-2 (21 KOs), looked like a man possessed, throwing over 800 power punches, an absolutely astonishing number, according to CompuBox.

So what is next for Khurtsidze?
“I would like another fight with one of the top guys in the division, and then I believe I deserve a world title shot,” said Khurtsidze, who is ranked #9 in the WBC, #12 in the IBF and will jump into the WBO ratings now that he has the WBO International title.
“Khurtsidze’s performance against Douglas was remarkable,” said Lou DiBella, President of DiBella Entertainment. “Against the odds and in the face of his doubters, Khurtsidze mauled Douglas each round, stalking and pressuring him throughout like his idol Mike Tyson used to do. I am so proud of him and thrilled that he is now receiving the recognition that I’ve known he’s deserved. I will do all I can to bring him the best opportunities to face the elite fighters in the middleweight division as well as to once again challenge for a world title.”
Lou DiBella certainly has had success promoting fighters in the middleweight division. He promoted former undisputed middleweight champion Jermain Taylor from the beginning of his career and was the man who took a seemingly old and unknown Argentinian Sergio Martinez and transformed him into one of the most memorable 160lb. champions in decades.
DiBella is heavily invested in the middleweight division and his loaded stable of fighters features some of the biggest names and most promising young talent in all of boxing.
Middleweights promoted by DiBella Entertainment include former world champion Andy Lee, recent world title challenger Sergio Mora, former three-time middleweight world title challenger Matthew Macklin, WBO #6 contender Artur Akavov, Ukrainian amateur standouts and now red-hot prospects Sergey Derevyanchenko and Ievgen Khytrov as well as undefeated up-and-comers Steve Rolls and Alantez Fox.
“Lou believed in me when my career was in doubt,” said Khurtsidze. “I knew that he was the guy who could and would resurrect my career. Lou is the best, and I know that he will get me the opportunity to win a world title.”
Website Admin