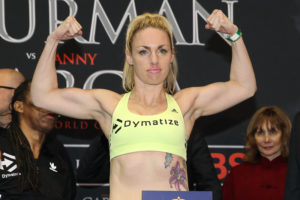 Broadway Boxing: Hardy vs. Kiss is sponsored by Nissan of Queens, OPTYX, Azad
Watches and Christos Steak House. Tickets start at $45 and are available by visiting
https://tickets.completeticketsolutions.com/DEI/Online/default.asp or calling 888-612-4191.

Broadway Boxing was launched in April 2004 as a monthly boxing series featuring local prospects and contenders. By August of 2008, Broadway Boxing had become a weekly series on SNY with a combination of live programming and taped delayed broadcasts of previous events. For almost nine years, Broadway Boxing has aired every Sunday night at 8 p.m. ET on SNY. During that time, the series has grown to produce some of the highest ratings for any program broadcast on SNY, outside of NY Mets games. World champions such as Vitali Klitschko, Gennady Golovkin, Jose Pedraza, Andre Berto, Paulie Malignaggi, Peter Quillin, Guillermo Rigondeaux, Yuriorkis Gamboa, DeMarcus Corley, Randall Bailey and Amanda Serrano have appeared on the series.

“The insurance requirements in New York have kept DiBella Entertainment’s flagship series and almost all club shows out of New York for the past year because they just aren’t financially viable,” said Lou DiBella, President of DiBella Entertainment. “But the public clamoring has been too great to ignore; we are going to plant our flag for one night and we hope boxing fans come out and support live boxing featuring homegrown and world class talent.”

Now a two-division WBC International champion, Brooklyn’s popular Heather “The Heat” Hardy (19-0, 4 KOs) will return to the series where she got her start in boxing. Before becoming a staple at Barclays Center (where she has fought seven of her last eight bouts), Hardy was a regular on Broadway Boxing, making her pro debut on the series in August 2012. She quickly amassed a loyal following with her charismatic personality and fan-friendly style. It was in October 2014 on Broadway Boxing when Hardy won her first WBC International title at junior featherweight. Last August at Ford Amphitheater in Coney Island, Hardy handed rival Shelly Vincent her first loss to capture the WBC International title at featherweight. The entertaining slugfest was televised by NBC Sports Net and helped to increase Hardy’s national profile. 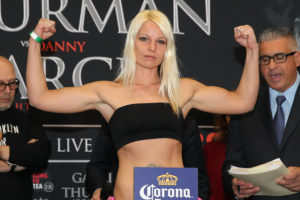 Hardy’s opponent on May 18 will be Budapest, Hungary’s Edina “DNA” Kiss (14-3, 8 KOs), who has two wins against former
world title challenger Erika Kalderas. The pair last fought each other on March 4, at Barclays Center, with Hardy winning a unanimous decision. Kiss rebounded with a six-round unanimous decision victory on April 15.

“I’m very anxious and excited to get back in the ring on May 18, hoping that a dominant performance will put me on track for my next fight to be for a world title,” said Hardy.

Junior middleweight prospect Eric Walker (15-0, 8 KOs), of Plaquemine, LA, will make his New York debut in a 10-round bout on the undercard. He had an unconventional amateur boxing career, going 61-1 during 13 years in Dixon Correctional Institution. Walker entered the prison system at only 15 years old with no boxing experience and rose through the ranks, eventually becoming the captain of the institution’s boxing team. Following his release in June 2013, Walker turned pro that December. Two years later, Walker was called in as an underdog to face 13-0 prospect Christopher Pearson on Spike TV and dominated en route to an eight-round unanimous decision. In his next bout, Walker went the 10-round distance for the first time to seize the WBC Continental Americas title with a unanimous decision versus Josue Ovando. He has since added another two knockout victories to his ledger.

2016 Olympian Charles Conwell (1-0, 1 KO), of Cleveland, OH, will follow up his successful pro debut in a four-round bout on the show. Conwell was a highly accomplished amateur who represented the United States at the 2016 Olympics in Rio. Building a record of 132-14, he was also an 11-time National champion. Conwell comes from a boxing family; all eight of his siblings were enrolled in the sport at a young age by their father, Charles Sr. Co-promoted by DiBella Entertainment and Holden Productions, and managed by David McWater’s Split-T Management, the 19-year-old Conwell made his pro debut on April 21, at Buffalo Run Casino, in Miami, OK, with a 41-second first-round knockout. 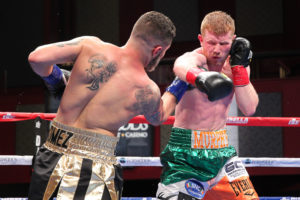 Noel Murphy (9-0, 2 KOs), 22, of County Cork, Ireland, returns to the tri-state area for the ninth time in 10 pro bouts. Murphy was a multi-time National champion as an amateur before relocating to Yonkers, NY, and embarking on his professional career in November 2014. Murphy began 2017 by earning an impressive six-round unanimous decision in January versus previously unbeaten prospect Maxito Sainvil, at Barclays Center. In his last bout, Murphy dominated Spain’s Avelino Vazquez via unanimous decision on February 25, to win the BUI Celtic welterweight title in front of a packed house at National Stadium in Dublin.

Puerto Rican sensation Nicklaus Flaz (4-0, 4 KOs) took up boxing at the age of 14. Born in Bayamon, Flaz initially used boxing as a way to lose weight, but he soon fell in love with the sport and pursued an amateur career. Throughout the next six years, Flaz won numerous tournaments while accumulating a tremendous record of 88-6. In addition to being a three-time National champion for Puerto Rico between 2013-’15, Flaz also won gold medals at the Cheo Aponte Games in 2013 and ’14, Copa Romana tournament in 2014, and International Wilfredo Gomez tournament in 2014. Flaz will compete in a six-round middleweight bout.

Tickets for the May 18 Broadway Boxing event, held at Paramount Theater at Long Island University, in Brooklyn, promoted by DiBella Entertainment and presented by Nissan of Queens, Azad Watches, OPTYX, and Christos Steak House, are priced at $150 ringside, $85 floor seats and $45 general admission. Tickets can be purchased through Complete Ticket Solutions at 888-612-4191, or by visiting: https://tickets.completeticketsolutions.com/DEI/Online/default.asp. Doors open at 7:00pm, with the first bout scheduled for 7:30pm.