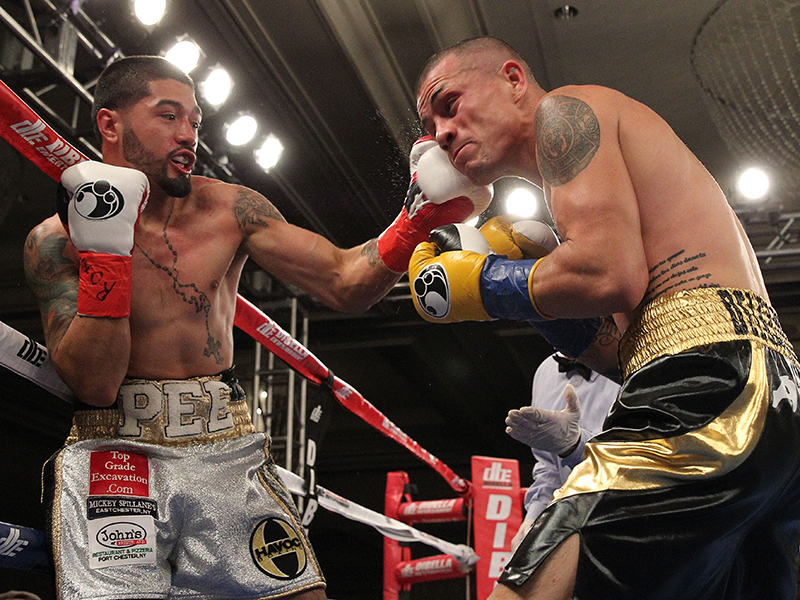 Rye Brook, NY (04/20/16) – On Wednesday night, DiBella Entertainment staged its popular Broadway Boxing series up north in the suburbs of Westchester County with an exciting card, in front of a passionate and lively crowd at the beautiful Hilton Westchester in Rye Brook, NY.

In the evening’s main event, junior lightweight prospect Bryant “Peewee” Cruz returned for the first time since his ShoBox appearance in December, engaging Mexican Moises Delgadillo in a thrilling eight-round war of attrition. Cruz’ conditioning was key as he overcame a few moments of adversity against a very determined foe, who kept the pressure on throughout. Cruz, 132.8, of Portchester, NY, patiently looked for openings in the first, while countering Delgadillo’s offense with combinations. However, Delgadillo, 132.4, of Jalisco, kept a consistent attack to the body to force Cruz into the trenches. A jab-straight right combination in round two staggered Delgadillo and caused him to touch his glove to the canvas for a knockdown call. The Mexican recovered and fought back well to end the frame and continued banging the body in the third. Cruz was finding a home for his overhand right at the midway point shifting the momentum back in his favor. On the inside, Cruz was landing combinations and stunned Delgadillo once again with a right hook in the fifth frame. Maintaining control and dictating the pace down the stretch, Cruz demonstrated a varied arsenal with countershots, left hooks, and straight rights to the body. Hurting Delgadillo with his own hooks downstairs, Cruz outboxed his way through the final stanza to win a unanimous decision on scores of 80-71, 79-72 and 77-75. Cruz improved his record to 17-1 (8 KOs), while Delgadillo fell to 17-15-2 (8 KOs).

(Photo Credit: Ed Diller/DiBella Entertainment)
Irish Noel Murphy, 144.8, met Nicaraguan Ariel Vasquez, 145, of Phoenix, AZ, in a battle of southpaw welterweights scheduled for six rounds. The exciting bout opened with several heated exchanges and remained that way for much of the contest. Murphy, who employed a steady jab and a quick, stinging straight left when given the proper distance, was able to dominate the action from both the inside and outside. Two overhand lefts by Murphy hurt his adversary in the fourth then a left hook dropped him in the fifth. For the remainder of the contest, Murphy was impressively mixing up blistering combinations to the head and body. All three judges scored the bout 60-52 for Murphy via unanimous decision to improve his record to 6-0 (2 KOs). Vasquez dropped to 11-13-2 (8 KOs). A native of County Cork, Ireland, the 21-year-old Murphy was a multi-time national champion as an amateur before relocating to Yonkers, NY, and embarking on his professional career in November 2014.
Local cruiserweight prospect Stivens Bujaj, 193.6, of Yonkers, NY, knocked out Harvey Jolly, 197.8, of Nashville, TN, inside three rounds. Bujaj applied pressure throughout, throwing hooks to the body to close the gap. A short left hook to the chin hurt Jolly in the second then a follow-up barrage dropped him in a neutral corner. Another left hook felled Jolly in the third and a final right uppercut forced him to the canvas for a full count, ending matters by knockout at the 1:51 mark. Bujaj upped his record to 15-0-1 (10 KOs), while Jolly fell to 15-23-1 (7 KOs). The Albanian Bujaj was a two-time NY Golden Gloves champion before turning pro in 2010.
World-ranked junior lightweight contender Billel Dib, 132.6, of Sydney, New South Wales, Australia, made his US debut against a very game Jose Salinas, 132, of Albuquerque, NM, in an eight-round bout. Ranked nine by the WBO and 13 by the IBF, Dib proved to have the quicker and heavier hands, using a jab to find openings for his powerful right hand. Salinas showed a sturdy chin, withstanding those chopping rights to close the distance and trade inside, banging to the body. Dib countered Salinas’s aggression with accurate, short rights then backed his foe into a corner with a sustained body attack of his own in round five. Salinas had one more rally in the seventh focusing his leather downstairs, but Dib battled back, shoulder-to-shoulder in the final frame controlling the action. Scorecards read 79-73, 77-75, and 76-76, awarding Dib a majority decision, improving his record to 19-1 (9 KOs). Salinas’s record dipped to 9-2-1 (5 KOs). A pro since 2011, Dib has already won the Australian and interim WBO Oriental super featherweight titles. Dib is also the cousin of former IBF featherweight champion Billy Dib.

(Photo Credit: Ed Diller/DiBella Entertainment)
Brooklyn lightweight prospect Wesley Ferrer, 137.6, remained unbeaten with an impressive second-round stoppage over Luis Alberto Pelayo, 137.6, of Guadalajara, Mexico. The southpaw Ferrer backed up Pelayo all through round one with a stiff jab. In the second, Ferrer began to set up combinations off of his jab, dropping Pelayo with a straight left. Once the action resumed, Ferrer hurt Pelayo again with two left hooks to the body then finished him off with a barrage at 2:37 of the frame. Ferrer improved to 11-0 (6 KOs), while Pelayo fell to 12-7-1 (6 KOs). An outstanding amateur, Ferrer was a two-time NY Golden Gloves champion, 2012 New York Amateur Boxing champion and New York City Metro Tournament champion, as well as a participant at the 2013 National Golden Gloves.
Website Admin