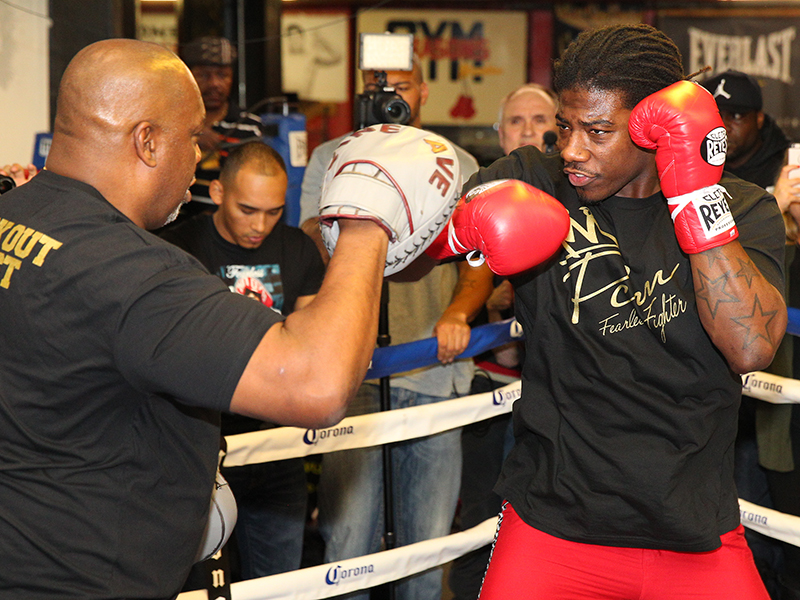 BROOKLYN (Dec. 22, 2015) – Four heavyweights will meet in two world title fights for one history-making night in Brooklyn.
Undefeated heavyweight challengers Charles Martin and Vyacheslav Glazkov will battle for the vacant IBF World Championship on Saturday, Jan. 16, at Barclays Center, live on SHOWTIME®. Glazkov vs. Martin joins the previously announced main event featuring undefeated WBC Heavyweight World Champion Deontay Wilder (35-0, 34 KOs), of Tuscaloosa, Ala., making the third defense of his title against confident Artur Szpilka (20-1, 15 KOs), of Wieliczka, Poland.
“There has not been a heavyweight title fight in Brooklyn in 115 years. On Jan. 16, there will be two,” said Promoter Lou DiBella of DiBella Entertainment.
Tickets for the live event, which is promoted by DiBella Entertainment in association with Warriors Boxing and Sferis Knockout Promotions, start at $25, not including applicable fees, and are on sale now. Tickets can be purchased online by visiting www.ticketmaster.com, www.barclayscenter.comor by calling 1-800-745-3000. Tickets are also available at the American Express Box Office at Barclays Center. Purchase before January 1 and receive a 10 percent discount. Group discounts are available by calling 844-BKLYN-GP.
“I’m feeling really blessed to get this opportunity,” said Martin. “I want to become world champion so I can go down in history as a top heavyweight. Glazkov is a great fighter. He’s undefeated, so I know it’s going to be a tough fight, but I’m coming to be victorious. I’m getting ready and training hard so I can go out there and get that win.”
“I am looking forward to getting back in the ring and finally getting my opportunity to fight for a world title,” said Glazkov. “I want to thank everyone who helped me get to this place in my career.”
“It’s an honor to promote a dynamic young champion like Deontay Wilder against a tough threatening opponent like Szpilka. What would have been the first heavyweight title fight in Brooklyn in 115 years is now one of the first two. Martin versus Glazkov should be an extremely competitive fight and fans will be treated to the rarity of being able to see two world heavyweight championship fights on the same card.”
“I am excited to be involved in this historic event involving two heavyweight world titles fights, contested on the same evening,” said Leon Margules, President of Warriors Boxing. “Having worked with Artur Szpilka since he began his career, I know he is more than ready for this challenge. Artur and Charles Martin both have all the tools necessary to win heavyweight world title in Brooklyn on January 16.”
“January 16 will be our best card yet,” said Brett Yormark, CEO of Brooklyn Sports & Entertainment. “We’re excited to host two heavyweight world title fights in one night and continue to make Brooklyn the center of boxing.”
Martin (22-0-1, 20 KOs), of Carson, Calif., by way of St. Louis, is 22-0-1 with 20 KOs and is rated fourth by the IBF. The Ukrainian Glazkov, the No. 1-ranked IBF contender, is 21-0-1 with 13 knockouts.
The unbeaten Martin has stopped his last 12 opponents.  The 6-foot-5, 29-year-old southpaw is coming off a third round TKO of Vicente Sandez in September. Martin, a top-level amateur, has maintained a busy schedule since turning professional – he fought four times in 2015 and five times in 2014.  Martin is trained by U.S. Olympian Henry Tillman in Big Bear, Calif.
The aggressive-minded, 6-foot-3 Glazkov has won seven consecutive fights, including both his outings in 2015. Glazkov, who has never been knocked down, owns victories over former champions Steve Cunningham and Tomasz Adamek.  The win over Cunningham this past March earned him the No. 1 spot in the IBF.  Before turning pro in July 2009, Glazkov was an amateur standout in the Ukraine – he won the bronze medal at super heavyweight at the Beijing Olympics in 2008, and was a silver medalist at the 2007 World Amateur Boxing Championships.  The 31-year-old will make his U.S. debut fighting for the IBF belt that was recently vacated by Tyson Fury.
# # #
Barclays Center’s BROOKLYN BOXING™ programming platform is presented by AARP.  For more information visit www.SHO.com/Sports follow on Twitter @SHOSports, @BronzeBomber, @Szpilka_Artur, @BarclaysCenter, @WarriorsBoxingProm and @Swanson_Comm or become a fan on Facebook at www.Facebook.com/SHOSports, www.Facebook.com/DiBellaEntertainment, www.Facebook.com/barclayscenter
CONTACTS:
Swanson Communications: (202) 783-5500
DiBella Entertainment: (212) 947-2577
Andre Courtemanche, Warriors Boxing: (954) 302-2462
Chris DeBlasio, Showtime Networks Inc.: (212) 708-1633
Matt Donovan, Showtime Networks Inc.: (212) 708-1663
Flo Jocou, Showtime Networks Inc.: (212) 708-7319
John Beyrooty BZA/SHOWTIME: (562) 233-7477
Barry Baum, Barclays Center: (718) 942-9533
Mandy Gutmann, Barclays Center: (718) 942-9587
Credentials: www.magnamedia.com
Website Admin