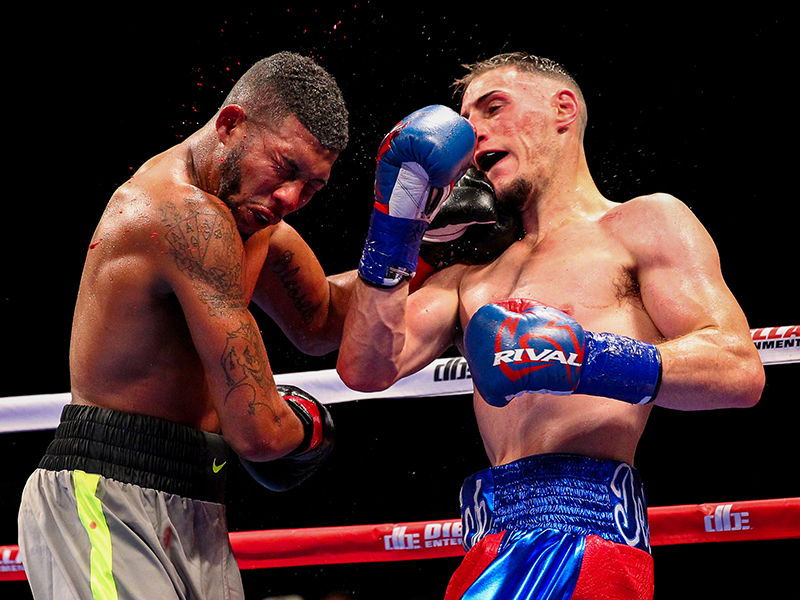 MASHANTUCKET, CT (August 11, 2016)  –
Broadway Boxing ,  presented by DiBella Entertainment, returns Thursday night, September 1, to the Premier Ballroom at Foxwoods Resort Casino in Mashantucket, Connecticut.
Lightweight prospects  Amos “2 Smooth” Cowar t (11-1-1, 9 KOs) and  “Nice” Nick DeLomba (10-1, 2 KOs) will throw-down in the eight-round main event.
“Foxwoods has become a terrific venue for Broadway Boxing and I am thrilled to deliver this lightweight crossroads battle between two once-beaten prospects as the main event,” said Lou DiBella, President of DiBella Entertainment. “Cowart fought well in his ShoBox appearance last year, but he will be returning to his natural weight class on September 1. Moving past his hometown confines for only the second time as a pro, we will see if DeLomba is ready to elevate his career to the world stage.”
A native Floridian from Groveland, Cowart (pictured above) is coming off his first loss as a professional, suffered just over one year ago in Atlantic City. The bout, televised live as part of Showtime’s ShoBox: The New Generation series, saw the hard-hitting Cowart move up in weight to challenge fellow undefeated prospect Regis Prograis. Cowart went on to lose a very entertaining eight-round decision to the still undefeated contender Prograis, who was chosen as one of this year’s ESPN.com’s “Prospects to Watch”. Following the loss, Cowart was forced to sit on the sidelines as he nursed an injury suffered in the bout. Now back and fully healthy, Cowart is dropping down in weight and looking to make some noise in the 135 lbs. division.
“The bout with Prograis was a good learning experience, but I am not a 140-pounder,” said Cowart. “I took the fight because it was an opportunity to perform on national TV, and I believe I gave a good showing of what I am capable of doing. I am back now at my comfortable weight and know that I have what it takes to compete against the best up-and-coming guys in this division. DeLomba is the hometown boy. I know that he is going to have the crowd behind him, but once that bell rings, it’s just him and me in that ring, and I plan on putting on a spectacular performance as I get my career back underway and moving toward the top.”
DeLomba, the reigning New England super lightweight champion, has been favorably compared at this stage of his young career to another Italian fighter from the same Rhode Island city of Cranston, in two-division world champion Vinny Paz. DeLomba is expected to have a partisan hometown crowd behind him and will be looking to make a statement against the once-beaten Cowart.
“This is a huge fight for me at this stage of my career,” said DeLomba. “Cowart’s only loss is to Prograis and he is considered one of the best young 140-pounders in all of boxing. If I can beat Cowart more convincingly, that is a major statement. I am not only going to be the bigger guy in the ring on fight night, but I am the better boxer. He is coming off a year layoff, and I know that he is eager to get back in that ring, but this is the biggest fight of my career, and I plan on putting on a show come September 1.”
Belgium super featherweight Dardan Zenunaj (12-1, 9 KOs), a former World Boxing Association (WBA) International champion, and undefeated Cuban amateur standout Luis “The Lion” Garcia (14-0, 11 KOs), fighting out of Peekskill, New York, are also scheduled to be in action on the Sept. 1 Broadway Boxing card in separate eight-round bouts.
Additional fights on the card will be announced shortly.
Tickets for the Sept. 1st card are on sale and priced at $125, $75 and $45, not including applicable service charges and taxes. Tickets are available at www.ticketmaster.com and www.foxwoods.com or by visiting the Foxwoods’ Box Office. To charge by phone, call Ticketmaster at (800) 745-3000.
For more information, visit  www.DBE1.com and www.Foxwoods.com , follow on Twitter @LouDiBella, @DiBellaEnt, @ FoxwoodsCT, @DardanZenunaj, and become a fan on Facebook at  www.Facebook.com/DiBellaEntertainment and www.facebook.com/foxwoods/
Website Admin