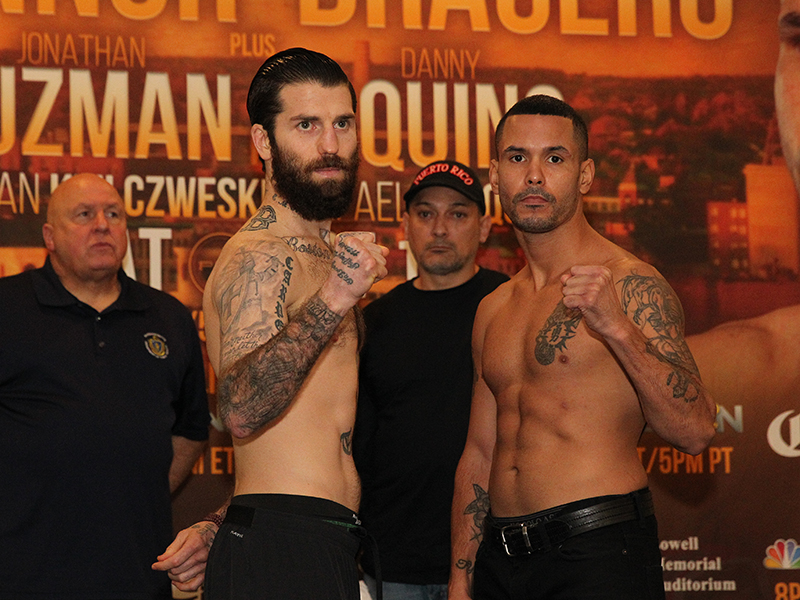 PREMIER BOXING CHAMPIONS ON NBCSN
SATURDAY, OCTOBER 10 FROM THE LOWELL MEMORIAL AUDITORIUM IN LOWELL, MASSACHUSETTS
8 P.M. ET/5 P.M. PT
TICKETS ON SALE NOW!
LOWELL, Mass. (October 6, 2015) – The great Boston vs. New York City sports rivalry continues Saturday, October 10 in the ring on national television with northeast bragging rights on the line as Premier Boxing Champions (PBC) on NBCSN comes to historic Lowell Memorial Auditorium in Lowell, Massachusetts.
The Boston home team sends out welterweight Danny “Bhoy” O’Connor (26-2, 10 KOs) and featherweight Ryan “The Polish Prince” Kielczweski (23-1, 7 KOs), respectively, against Brooklyn invaders Gabriel “Tito” Bracero (23-2, 4 KOs) and Rafael “Dynamite” Vazquez (16-1, 13 KOs).
Tickets for the live event, which is promoted by DiBella Entertainment in association with Murphys Boxing, are on sale and priced at $125, $85, $50 and $35, not including applicable service charges and taxes.  Special student, veteran and senior ticket prices also available. For tickets, visit www.lowellauditorium.com.
O’Connorwill be seeking revenge for 2011 loss to Braceroin the 10-round main event, while Kielczweski faces the toughest test of his career versus Vasquez in their 10-round bout to open the NBCSN broadcast at 8 p.m. ET/5 p.m. PT.
In the other scheduled televised fight, undefeated Dominican super bantamweight KO artist Jonathan “Salomon King” Guzman (19-0, 19 KOs), fighting out of nearby Lawrence (MA), takes on Connecticut’s upset-minded Danny Aquino (17-2, 10 KOs) in the 10-round co-feature.
Boston vs. New York is a classic matchup that has dominated sports headlines in the northeast for years as the New York Yankees and Boston Red Sox waged countless wars while the New England Patriots faced the New York Giants in two Super Bowls and continued their longtime rivalry with the New York Jets. The rich tradition of this rivalry has also spilled into the ring as many top fighters from each region have faced-off over the years.
The first significant Boston vs. NYC fight goes back to 1927 at Yankee Stadium, when Jack Dempsey stopped Jack “The Boston Gob” Sharkey in the seventh round of their heavyweight title eliminator to challenge world champion Gene Tunney.  Controversy surrounded this fight as Sharkey, a sailor in the U.S. Navy, fought his boxing idol, Dempsey, who along with Babe Ruth ruled Manhattan during America’s Golden Age of Sports in the 1920s.  Sharkey out-boxed Dempsey for six rounds until, complaining to the referee about Dempsey’s low punches, he was knocked out cold with a picture-perfect left hook.
Another legendary heavyweight champion from the Boston area, Rocky Marciano, wouldn’t have retired with his famous 49-0 record if one round or another were scored differently against Bronx favorite Roland LaStarza in 1950.  Marciano took a questionable 10-round decision from LaStarza at Madison Square Garden. Three years later at the Polo Grounds, Marciano successfully defended his world title, knocking out LaStarza in the 11th round of their 1953 Fight of the Year.
A pair of Hall of Fame heavyweights from Brooklyn, Floyd Patterson and “Iron” Mike Tyson, respectively, knocked out Boston’s Tom McNeeley and his son, Peter McNeeley.  McNeeley dropped Patterson once but he hit the deck 11 times before finally succumbing in the fourth round of their 1961 title fight in Toronto.  His son, Peter, lost by first-round disqualification to Tyson who was fighting for the first since being released from prison.
A fireman from Boston with brittle hands, Paul Pender, twice defeated arguably the consensus Greatest of All-time, Harlem’s “Sugar” Ray Robinson, not once but twice by 15-round split decisions in 1960 world middleweight title fights at the Boston Garden.
“Marvelous” Marvin Hagler, a transplanted New Jersey fighter who lived in Marciano’s hometown of Brockton, Mass., felt ripped off when he was given a draw in his first world title fight against Brooklyn’s defending champion Vito Antuofermo in Las Vegas. Two years later in 1981, Hagler captured the coveted crown at the Boston Garden as Antuofermo retired after four rounds.
Even Lowell’s “Irish” Micky Ward had a New York City rival in Brooklyn’s Zab Judah, who he dropped a hard-fought 12-round decision to in 1998.  For many years Judah said Ward was the toughest opponent he ever fought.
More recently, Irish Olympian Kevin McBride, fighting out of the Dorchester section of Boston, ended Tyson’s career in 2005 with a sixth-round TKO victory that left the boxing world in shock, and Boston heavyweight John Ruiz – the only Latino heavyweight champion of the world – won a 2008 fight in Mexico against Harlem’s Jameel McCline by 12-round decision in a world title eliminator.
On October 10, O’Connor, Bracero, Kielczweski and Vazquez will have their opportunity to not only represent their hometowns, but to etch themselves into the annals of the rivalry.
# # #
For more information visit www.premierboxingchampions.com, www.nbcsports.com/boxing, www.lowellauditorium.com and www.dbe1.com, follow on Twitter @PremierBoxing,  @LouDiBella, @DropkickMurphys, @MurphysBoxing, @DOC_Boxing, @TeamBracero, @NBCSports and @Swanson_Comm and become a fan on Facebook at www.Facebook.com/PremierBoxingChampions, www.facebook.com/NBCSports, www.Facebook.com/DropkickMurphys,www.facebook.com/MurphysBoxingand www.facebook.com/DiBellaEntertainment.
CONTACTS: Swanson Communications: (202) 783-5500
Michael Donahue, Premier Boxing Champions: (630) 441-8080
Kevin Rooney, DiBella Entertainment: (212) 947-2577
Sean Sullivan, Murphys Boxing: Sean.sullivan@murphysboxing.com
Brian Krajewski, Lowell Auditorium: Brian_Krajewski@uml.edu
Credentials: www.magnamedia.com
Website Admin