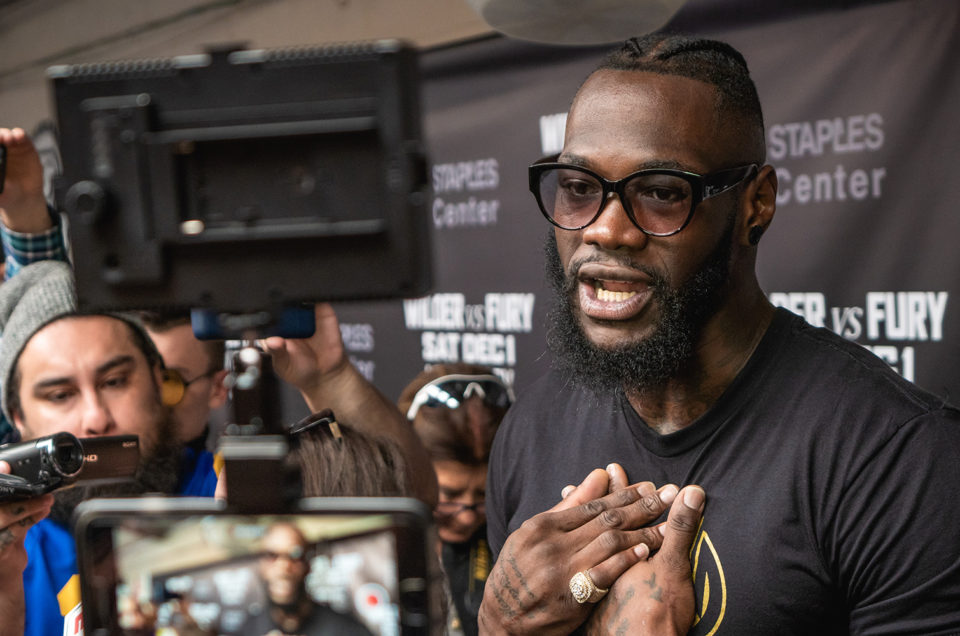 WBC Heavyweight Champion Deontay Wilder Battles Lineal Heavyweight Champion Tyson Fury Saturday, December 1 On SHOWTIME PPV® From STAPLES Center in Los Angeles
Click HERE for Photos from Esther Lin/SHOWTIME
Click HERE for Photos from Ryan Hafey/
Premier Boxing Champions
LOS ANGELES (November 5, 2018) – WBC Heavyweight World Champion Deontay Wilder held a jam-packed media day Monday in Los Angeles where he discussed his blockbuster matchup against lineal heavyweight champion Tyson Fury taking place Saturday, December 1 on SHOWTIME PPV® from STAPLES Center in Los Angeles.
Wilder arrived in Los Angeles, along with trainer Jay Deas, to show off his skills in front of media at Churchill Boxing Club in Santa Monica. The most significant heavyweight event in the U.S. in more than 15 years, Wilder vs. Fury tests the raw power of the 6-foot-7 Wilder against the unmatched size and mobility of the 6-foot-9 Fury.
Tickets for the event, which is promoted by BombZquad Enterprises and Queensberry Promotions, in association with DiBella Entertainment and TGB Promotions, are on sale now. Ticket prices start at $75, plus applicable fees and are available via AXS.com. Wilder vs. Fury will be produced and distributed by SHOWTIME PPV.
Here is what Wilder and Deas had to say Thursday at media day, where Wilder was joined by his girlfriend Telli Swift and their eight-month-old daughter Kaorii:
DEONTAY WILDER
“I feel like I’m at my very best right now. Mentally, physically and emotionally I’m ready to go. Everything is perfect. I just want to get in the ring and show action. Tyson Fury doesn’t know what he’s gotten himself into.
“As a true champion, I know how to adjust to any fighter that’s in front of me. My experience facing fighters of all styles has prepared me for this special fight.
“I’ve had tremendous sparring. Every day I’m making adjustments and getting myself right so I can get my timing and style exactly how it needs to be. If the fight was this weekend, Deontay Wilder is ready to go.
“Luis Ortiz was the most avoided fighter in the heavyweight division and I understand why he had never gotten the title shot before. I’m the type of fighter who gives people opportunities and he was the fighter I needed to face to prove to the world what I’m all about.
“This is not a game for me. Everyone has heard about what it’s like to be in the ring with me, but until you’re in there, you don’t know for sure that what you’ve been hearing is for real. I’m the best in the world. I don’t think any heavyweight has been through what I’ve been through.
“I’m training for a certain type of mission. As a fighter I have to have the mindset that I must be ready for anything. Then, once it’s time for the bell to ring, I become ‘The Bronze Bomber’.
“Fury has height just like me and he also brings an awkward style like myself. He’s rangy, mobile and he believes he’s the best in the world. You’ll get two giants who are athletic and move around the ring like no one else in this sport.
“They say that I have the power and he has the boxing skills. We’ll see on December 1. It’s a puncher versus a boxer. I think the puncher is going to box his lights out, and then I’m going to knock his lights out.
“I don’t watch too much film or study guys past getting their style down and seeing how they use their styles. My trainers watch film and use that knowledge to give me advice throughout the fight. I find that my opponents fight differently depending on who they’re facing, so I can’t dwell too much on watching past fights.”
JAY DEAS, Wilder’s Trainer
“Tyson Fury is kind of like a Rubik’s cube. But a Rubik’s cube can be solved. Fury is a very versatile fighter who can move, he can box and fight from lots of distances. He’s the total package as a fighter and on top of that he’s strong-willed mentally.
“We have our hands full, but I know that Deontay Wilder is the guy to handle Tyson Fury. Deontay is the the right guy to take over boxing and this is the first step in that.
“Deontay has had a fantastic camp and we’ve had really good sparring partners. Fury is a tall fighter, but it’s really the athleticism that makes him what he is. We believe we’re better off finding more athletic guys who are slightly shorter than Fury, rather than someone his height who is a statue.
“Fortunately Deontay has always been a focused fighter, so keeping him right mentally I don’t think will ever be a problem. Deontay can handle any chaos around him better than anyone I’ve seen. When he says he’s the man for this job, he really means it.
“The tough thing with preparing for Tyson Fury is that even he doesn’t know exactly what he’s going to do in there. He can fight lefty, righty, dirty or clean. We’re working on being prepared for all of these things and more.
“Both guys are very athletic and very awkward style-wise, but once this fight combusts, it’s going to be phenomenal. You don’t want to blink or go to the bathroom, the pretzel can wait, because you’re going to want to catch every second of it.”
#          #          #
For more information visit www.SHO.com/Sports, www.premierboxingchampions.com and www.staplescenter.com follow on Twitter @ShowtimeBoxing, @SHOSports, @PremierBoxing @BronzeBomber, @Tyson_Fury, @TGBPromotions, @STAPLESCenter and @Swanson_Comm or become a fan on Facebook at www.Facebook.com/SHOSports, www.Facebook.com/PremierBoxingChampions and www.facebook.com/STAPLESCenter.
CONTACTS:
SHOWTIME Sports: (212) 708-1339
Tim Smith, Premier Boxing Champions: timothy@haymonboxing.com
Swanson Communications: (202) 783-5500, contact@swansonpr.com
Steve Pratt, BZA PR: (310) 408-4555
Monica Jaffe, TGB Promotions: (818) 817-8001
Bernie Bahrmasel, DiBella Entertainment:(212) 947-2577
Shane Dyer, Queensberry Promotions: ShaneDyer@frankwarren.com
Cara Vanderhook, STAPLES Center: (213) 742-7273
Credentials: www.magnamedia.com
Website Admin