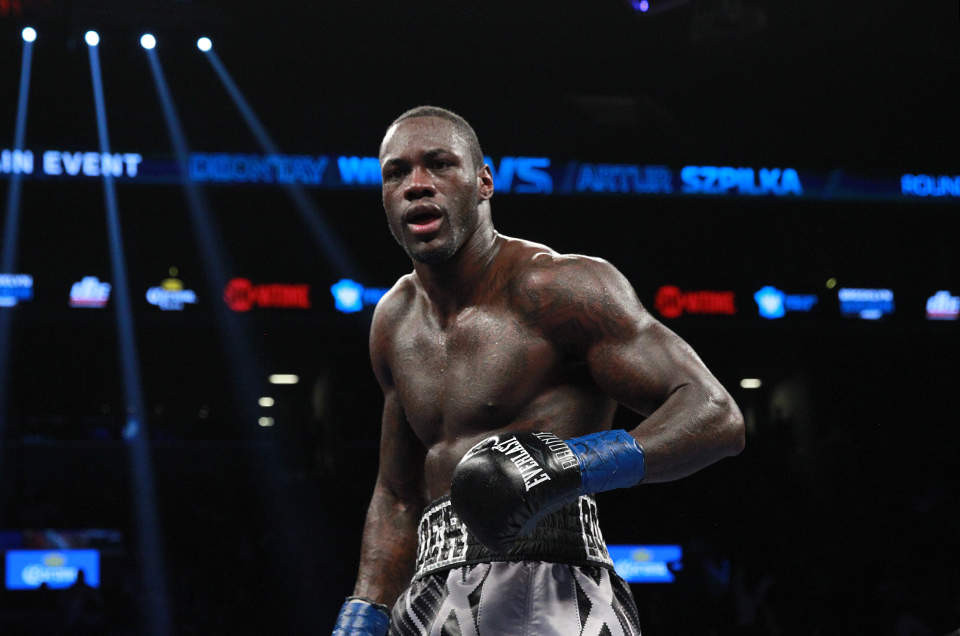 Photo Use Must Credit: Esther Lin/SHOWTIME
BROOKLYN (Oct. 5, 2017) – WBC Heavyweight World Champion Deontay Wilder will defend his title against mandatory challenger Bermane Stiverne on Saturday, Nov. 4live on SHOWTIME in a rematch of their 2015 world title fight. The event is presented by Premier Boxing Champions from Barclays Center, the home of BROOKLYN BOXING™.
Wilder (38-0, 37 KOs) dethroned defending champion Stiverne in January 2015 via unanimous decision in what was the promising challenger’s toughest fight to date. With the win, Wilder became the first American heavyweight champion in nearly a decade and he has gone on to defend the title five times. Stiverne (25-2-1, 21 KOs) remains the only Wilder opponent to go the distance with the hard-hitting Tuscaloosa, Ala., native who has knocked out every other professional opponent on his long resume.
Tickets for the live event, which is promoted by DiBella Entertainment and TGB Promotions, are on sale now and can be purchased at ticketmaster.com, barclayscenter.com or by calling 800-745-3000. Tickets can also be purchased at the American Express Box Office at Barclays Center. Group discounts are available by calling 844-BKLYN-GP.
The Nov. 4 main event will be the second heavyweight world championship bout to air live on SHOWTIME on back-to-back Saturdays. On Oct. 28 unified heavyweight world champion Anthony Joshua will meet Kubrat Pulev for Joshua’s IBF and WBA world titles in the main event of a fight card from Cardiff, Wales.
After Wilder vs. Stiverne I, Stiverne was hospitalized at University Medical Center in Las Vegas for severe dehydration and muscle damage, which he claimed affected his performance in his first title defense. Stiverne bounced back with a win over Derric Rossy and has been advocating for a rematch since.
“Stiverne asked for it, so he’s going to get it,” Wilder said. “Whatever happens happens. Ask and you shall receive. I’m relieved to be getting my mandatory out of the way. At least now I won’t have to deal with that down the road.
“In the first fight, I broke my hand in the third round, and I still dominated. That was a lot of the reason why it went the distance. This time it’s a different day, different time and different fight. This time it won’t end well for him.
“Despite all of these obstacles that are thrown in my path, it still will not stop me from reaching my ultimate goal, which is to be the undisputed heavyweight champion of the world.”
Stiverne replaces Luis Ortiz, who was pulled from the fight by the WBC on Wednesdayafter he failed a VADA anti-doping test.
“Stiverne will pay for Luis Ortiz screwing up,” Wilder concluded.
Stiverne was in camp preparing to fight Dominic Breazeale in a heavyweight attraction on the Nov. 4 undercard. Now the Haitian-born Las Vegas resident gets a shot at winning back the heavyweight crown he first won with a knockout of Chris Arreola in 2014.
“I am ready, willing and able to seize back my title from Wilder,” Stiverne said. “We all know that Wilder dodged a bullet in the first fight, but not this time. It was my fault, but I learn from my mistakes. On November 4, Wilder will feel my pain.”
After defeating Stiverne, Wilder went on to knockout each of his next five challengers including twice as the headliner on SHOWTIME. Wilder-Stiverne II will be the 10thheavyweight world championship fight to air live on SHOWTIME in the last two years as the heavyweight division continues its resurgence.
“The show must go on, as they say, and Deontay Wilder still plans to put on a show for New York City,” said Lou DiBella, President of DiBella Entertainment and promoter of the stacked Nov. 4 event. “Considering Stiverne’s status as mandatory challenger, he was always going to be a roadblock in Deontay’s quest for heavyweight unification. Now it’s time to see if Deontay can clear that roadblock and continue on his path to becoming the undisputed heavyweight champion and the most recognizable and dominant force in boxing.”
In the SHOWTIME CHAMPIONSHIP BOXING co-feature, former welterweight world champion Shawn Porter will battle perennial contender Adrian Granados in a matchup of two all-action fighters. In the opening bout of the three-fight telecast beginning at 9 p.m. ET/6 p.m. PT, unbeaten contender Sergey Lipinets will take on Akihiro Kondo for the vacant IBF Junior Welterweight World Championship.
For more information visit www.sho.com/sports , www.premierboxingchampions.com,
follow us on Twitter @ShowtimeBoxing, @PremierBoxing, @LouDiBella, @TGBPromotions@BarclaysCenter and @Swanson_Comm  or become a fan on Facebook  at www.Facebook.com/SHOBoxing, www.Facebook.com/barclayscenter,   and www.Facebook.com/DiBellaEntertainment
# # #
CONTACTS:
Swanson Communications: (202) 783-5500, contact@swansonpr.com
Bernie Bahrmasel, DiBella Entertainment/ TGB Promotions:
(212) 947-2577 / (773) 592-2986
Tim Smith, Premier Boxing Champions: timothy@haymonboxing.com
Chris DeBlasio, Showtime Networks Inc.: (212) 708-1633
Matt Donovan, Showtime Networks Inc.: (212) 708-1663
Flo Jocou, Showtime Networks Inc.: (212) 708-7319
Mandy Gutmann, BSE: (718) 942-9587
Stuart Bryan, BSE: (718) 942-9574

Media Credentials: To apply for credentials visit www.swansonpr.com/credentials; Deadline to apply is October 25