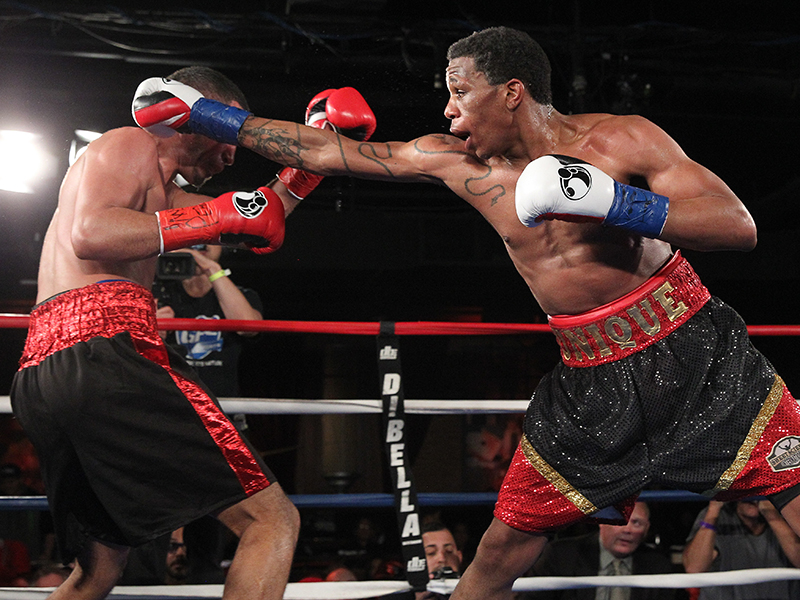 In the evening’s main event, southpaw Chris “Golden” Galeano, Bronx, met Devaun “Unique” Lee, Queens, in a sizzling battle of the boroughs. Heading into the fight, both Galeano and Lee were coming off impressive victories over previously undefeated prospects. The fiercely contested action developed a pattern early on with Galeano having success employing a higher work rate while Lee was landing the harder punches. Keeping a busy pace, Galeano tried to control the fight on the outside, finding the mark with his straight right often when Lee moved in closer. However, Lee was catching Galeano with his countershots on occasion to shorten that distance and one right hook rocked his adversary hard in the fifth frame. The second half continued with Galeano having the flashier combinations and Lee banging away with heavier shots inside. Though Galeano appeared fresh in the ninth, moving well and jabbing, Lee had a huge 10th round, badly hurting his foe during exchanges. After 10 rounds, the verdict was initially announced as a draw, however, Lee was later awarded a split decision win when a tabulation error was discovered. The final scores were 97-93 Lee, and 96-94 each way. In his first fight past six rounds, Lee improved to 7-2 (3 KOs) while picking up the New York State middleweight title and handing Galeano his first defeat to move his record to 10-1 (1 KO).

(Photo Credit: Ed Diller/DiBella Entertainment)
World-ranked super featherweight contender Tevin Farmer, 130, of Philadelphia, engaged veteran Gamaliel Diaz, 129½, of Nezahualcoyotl, Mexico, in a 10-round contest with the vacant NABF title at stake. Fighting in New York for the first time as a pro, Farmer was quick to demonstrate his advantage in hand speed, dropping Diaz in the opening frame with a tremendous left hook. The game and experienced Diaz recovered well to keep a consistent offense throughout the next four rounds, forcing Farmer to employ his defensive prowess, slipping punches while looking for countering opportunities. In the sixth, Diaz landed his best punch thus far with a straight right to Farmer’s chin. However, Farmer literally punctuated that round with a straight left to drop Diaz at the bell. The Philadelphian controlled the action for the remainder of the bout, knocking Diaz’ mouthpiece out with a counter left in the seventh then flooring him again in the final stanza. With scores of 97-90 twice, and 95-92, Farmer seized the NABF belt via unanimous decision, while increasing his remarkable winning streak to 14 in a row since starting out his career at 7-4-1. Farmer, a great, great nephew of the legendary lightweight champion Joe Gans, is now 21-4-1 (5 KOs), while Diaz’ record fell to 39-14-3 (18 KOs).

(Photo Credit: Ed Diller/DiBella Entertainment)
Cindy Serrano, Brooklyn, 131, administered a technically sound performance, outboxing Hungary’s Renata Domsodi, 128¾, Budapest, over six one-sided rounds. An accidental headbutt opened a cut over Domsodi’s left eye in the second. Despite the cut, Domsodi continued to move forward, though Serrano had no problems dismantling her foe. By round five, Serrano was landing her straight right with regularity. Three scores of 60-54 awarded a unanimous decision victory to Serrano, now 24-5-3 (10 KOs). Domsodi fell to 13-9 (6 KOs).
Back in the ring just six weeks after his last victory, Brooklyn junior welterweight southpaw Shemuel “The Chosen One” Pagan, 137, had to overcome a few moments of adversity against the cagey Ryan Picou, 136¼, of Las Vegas, to outpoint him over six action-packed rounds with effective aggressiveness. Primarily focusing on his offense, Pagan left himself open for counters and was rocked by a short right hook in the second round. He easily won the third, however, by digging to the body and placing his straight left hand well. In round four, a left hook caught an off balance Pagan for a knockdown call. Energized to enact revenge, Pagan dominated the final two frames with accurate combinations. Scorecards read 58-55, and 57-56 twice, all for Pagan by unanimous decision, who improved to 8-0 (4 KOs). Picou’s ledger dropped to 2-8. As an amateur, Pagan was a five-time New York Golden Gloves champion as well as a 2008 Olympic team alternate.
Feinting and pressuring his way inside, the world-ranked Russian southpaw Artur “Wolverine” Akavov, 160, Pskov, administered a heavy-handed, quick-fisted attack chopping down the taller and durable Todd “Blazin’ and Amazin'” Manuel, 158½, of Rayne, LA. After four and a half rounds of punishment, Manuel finally dropped to a knee from a straight left to the body in the fifth. He arose but was met with a barrage of shots, including two left hooks to the midsection forcing the second knockdown. Though weakened, Manuel survived the round. In the sixth frame, an Akavov straight left downstairs dropped Manuel to his knees once more, resulting in referee Harvey Dock calling a halt to the action at the 0:37 mark. In his second fight stateside, Akavov upped his record to 16-1 (7 KOs), while Manuel evened out at 11-11-1 (1 KO). Ranked number five by the WBO at middleweight, Akavov is working his way toward a world title shot in the near future.
Fighting for the first time since his entertaining draw against Lenin Castillo last August, Brooklyn’s “Notorious” Travis Peterkin, 180¾, stalked Larry Pryor, 180½, of Frederick, MD, early on, backing him up with a stiff jab. Whenever he had Pryor cornered, Peterkin would unleash his combinations. Halfway through the opener, the southpaw Peterkin found a home for his powerful straight left and landed it consistently throughout the eight-round contest. The Brooklynite began digging hooks to the body as the bout wore on as well. A cut opened up by Pryor’s left eye in round four. All three judges scored the bout 80-72 for Peterkin via unanimous decision, to improve his record to 16-0-1 (7 KOs). Pryor’s record dropped to 9-13 (5 KOs).
Website Admin