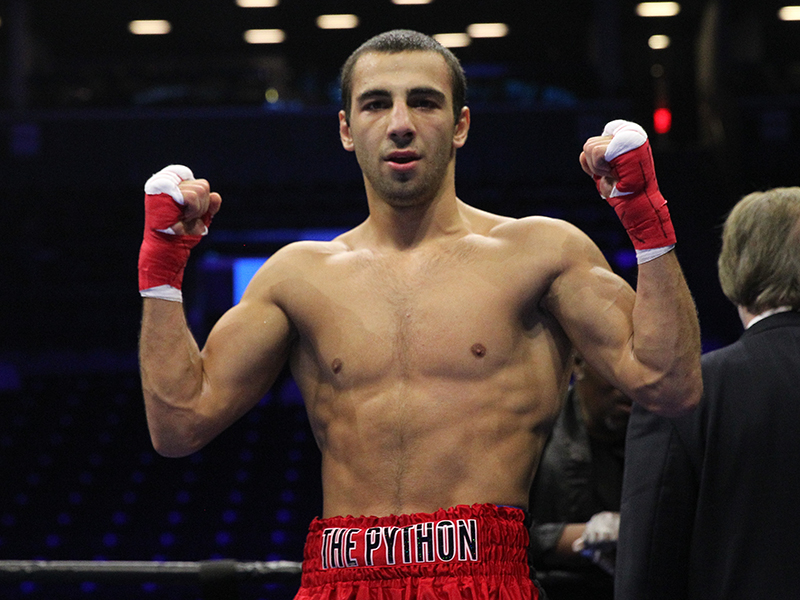 BROOKLYN (April 12, 2016) – The stacked undercard on Saturday, April 16, at Barclays Center, in Brooklyn, will also be featuring the New York debut of Russian welterweight prospect Radzhab “The Python” Butaev (1-0, 1 KO), newly signed to co-promoters DiBella Entertainment and Fight Promotions Inc. Doors open on Saturday at 5:00pm, with the evening’s first bout scheduled shortly thereafter.
The April 16 Premier Boxing Champions (PBC) on NBC tripleheader is headlined by undefeated rising star Errol “The Truth” Spence Jr. taking on former world champion Chris Algieri. Televised coverage begins at 8:30 p.m. ET/5:30 p.m. PT and will see cruiserweight world champion Krzysztof Glowacki defending his title against former cruiserweight champion Steve “U.S.S.” Cunningham, and undefeated 2012 U.S. Olympian “Sir” Marcus Browne battling fellow unbeaten Radivoje “Hot Rod” Kalajdzic.
When Butaev steps through the ropes at Barclays Center, he will be facing the experienced 6-1 (4 KOs) TyKeem Sadler, whose only loss came via split decision, in a six-round welterweight contest, so fans in attendance can be sure to expect explosive action.
The 23-year-old Butaev was a highly accomplished amateur, having compiled an incredible 304-12 record, with 164 of those wins coming by knockout. He participated in the World Series of Boxing as well, finishing at 9-1. He could have gone on to vie for a berth at the 2016 Olympics, but instead chose to turn pro in the United States for better opportunities.
Born in the Khasavyur, Dagestan region of Russia, Butaev competed in wrestling as a child before following in his older brother’s footsteps and beginning his boxing journey at the tender age of 10 years old. As an amateur, among many other awards, Butaev was the 2011 Junior European champion, 2013 World Universiade champion and 2014 Russian National champion. He also focused on his education during his time as an amateur and has earned two bachelor degrees in Law and Physical Sciences.
An aggressive boxer-puncher, Butaev successfully turned pro on March 25 with a 79-second demolition of his opponent at the Buffalo Run Casino, in Miami, OK. He currently travels back and forth between Russia and New York, training with the renowned Eduard Kravtsov, who also works with the Russian National boxing team. However, Butaev soon plans to make Brooklyn his permanent home and is looking forward to fighting in New York for the first time on Saturday.
“Though I could have competed in the Olympics, I felt that my career really wouldn’t excel until I turned pro in the United States,” said Butaev. “I know that I am in good hands with DiBella Entertainment and Fight Promotions Inc., who have developed the careers of many of my countrymen and contemporaries whom I knew well in the amateurs. I am excited to demonstrate my skills in front of an American audience in Brooklyn. On April 16 and beyond, they can expect great things from me.”
“Russia and Ukraine have been producing a tremendous amount of talent of late and I am thrilled to be able to introduce and establish Radzhab Butaev as one of the premier Russian prospects to the United States’ boxing public,” said Lou DiBella, President of DiBella Entertainment. “Butaev has unlimited potential and I will work hard to build a path for him toward a world championship. His road to a world title will not be traditional; he is far more advanced than the average up-and-comer. His bout on Saturday will get Brooklyn fans cheering and proud to have this future champion as an adopted resident of their great borough.”
“Butaev is still only 23 years old, but he already has a wealth of experience that will help to accelerate his progress as he embarks on his professional career,” said Max Alperovich, of Fight Promotions Inc. “I know that together with Lou DiBella, we will bring Butaev the best opportunities to make a name for himself among the elite of the welterweight division.”

Tickets for the live event on April 16, which is promoted by DiBella Entertainment in association with Star Boxing, start at $25, not including applicable fees, and are on sale now. Tickets can be purchased online by visiting www.ticketmaster.com, www.barclayscenter.com or by calling 1-800-745-3000. Tickets are also available at the American Express Box Office at Barclays Center. Group discounts are available by calling 844-BKLYN-GP.