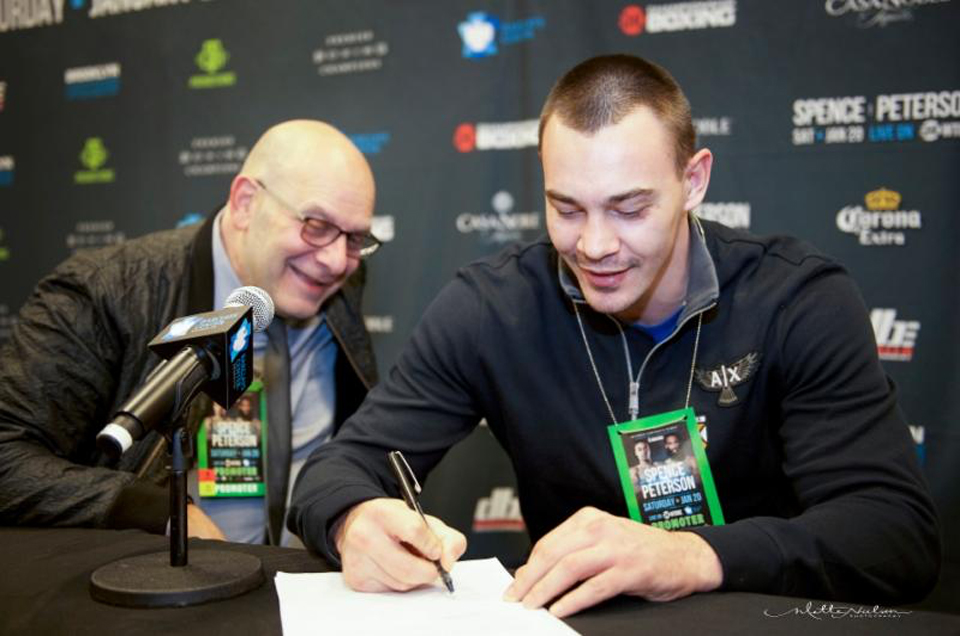 (Photo Credit: Mette-Margrethe Nielsen)
New York City (January 30, 2018) DIBELLA ENTERTAINMENT (DBE) has signed highly touted undefeated heavyweight prospect OLEKSANDR “Sasha” TESLENKO to an exclusive promotional contract. Teslenko will make his DBE debut on Broadway Boxing, next Wednesday, February 7, at B.B. King Blues Club & Grill in Times Square, New York City. Broadway Boxing is presented by Nissan of Queens, Azad Watches, OPTYX, and Christos Steak House.
The powerful 25-year-old Teslenko, who stands 6’5″, sports a record of 11-0 with 9 KOs, and will face KEENAN HICKMAN (6-2-1, 2 KOs), of Baton Rouge, Louisiana, in an 8-round bout.
Born in Chernivtsi, Ukraine, Teslenko took up boxing at age eight when his father brought him to a gym to learn how to defend himself. As an amateur, Teslenko became a three-time Ukrainian National champion while accumulating an impressive 224-23 record. During this time, Teslenko also earned a degree in Marketing from the University of Chernivtsi and served in the Ukrainian Army alongside DBE stablemate Ivan Golub.
Teslenko took a bold step in search of success as a professional boxer, leaving his family behind, relocating to Canada with little contacts and settling in Toronto. Sharing a house with three other Ukrainians and sleeping on a mattress on the floor, Teslenko worked construction to earn extra money while taking classes to learn English. He made his pro debut in September 2015.
“My goal is to become the Heavyweight Champion of the World and I know by working with Lou DiBella that is now possible,” said Teslenko. “I’m very happy to be making my New York debut on February 7 and will put on a great performance. The fans in attendance will know they are witnessing a future threat to the heavyweight throne.”

“Sasha is one of the most talented heavyweights that I’ve come across,” said LOU DIBELLA, President of DiBella Entertainment. “He had an impressive amateur career and possesses the tools to someday fight for the Heavyweight Championship of the World. We look forward to working with Sasha and his team as he strives to become one of the best heavyweights in the world.”

Said GARY FREEDMAN, manager of Teslenko, “I am excited that Sasha will be fighting on DiBella Entertainment’s Broadway Boxing event on February 7 in New York City and look forward to working with Lou and the entire team with the goal of making Teslenko the Heavyweight Champion of the World.”

Teslenko is coming off a second-round knockout of Nick Guivas on October 14, in Ontario, Canada. Earlier in 2017, Teslenko was victorious in two fights held in California with an eight-round decision against Bernardo Marquez on February 24, followed by a third-round knockout of Juan Goode on July 22.

The February 7 installment of the acclaimed Broadway Boxing series is headlined by a crosstown clash of unbeaten welterweights NOEL MURPHY (12-0, 2 KOs), of Woodlawn, New York and Brooklyn’s MIKKEL LESPIERRE (18-0-1, 8 KOs).
Tickets for BROADWAY BOXING, promoted by DiBella Entertainment and presented by Nissan of Queens, Azad Watches, OPTYX, and Christos Steak House, are currently on sale and are priced at $125, $100, $75 and $55. Tables are also available for purchase for this event, with VIP tables going for $1,000 per table (5 seats at $200 per seat), Ringside tables for $500 (5 seats at $100), and $375 tables (5 seats at $75). Tickets are available for purchase by calling the DiBella Entertainment office at (212) 947-2577. Doors open at6:30pm with the first bout scheduled for 7:00pm. B.B. King Blues Club & Grill is located at 237 W. 42nd Street between 7th and 8th Avenues in Times Square.