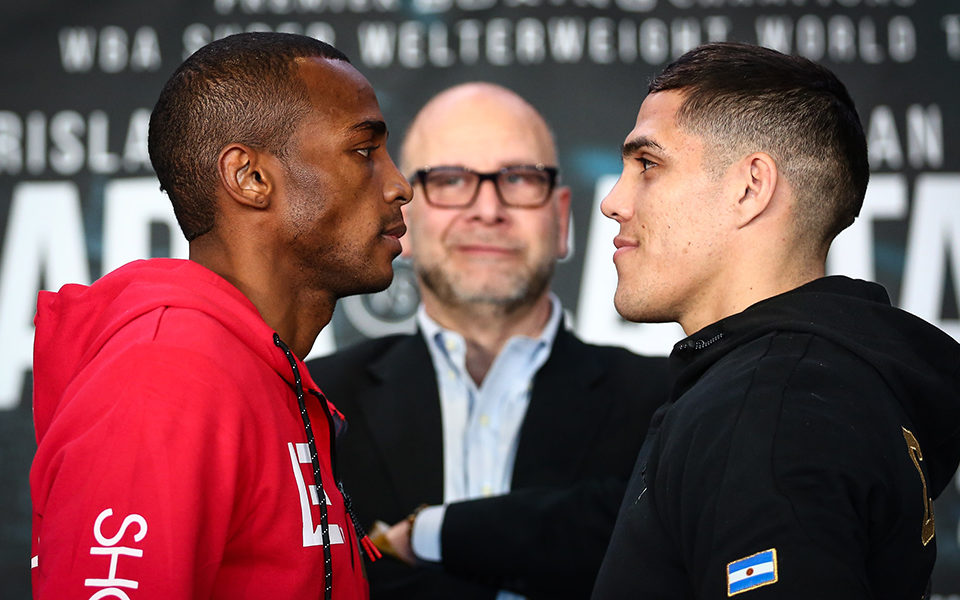 At the press conference, Cuban heavyweight Luis Ortiz faced off against Christian Hammer, as they near their 10-round showdown, while once-beaten contenders Bryan De Gracia and Eduardo Ramirez stared each other down before their 12-round featherweight clash that kicks off SHOWTIME CHAMPIONSHIP BOXING at 9 p.m. ET/6 p.m. PT.

Tickets for the event, which is promoted by TGB Promotions in association with DiBella Entertainment, are on sale now and can be purchased at ticketmaster.com, barclayscenter.com, or by calling 800-745-3000. Tickets can also be purchased at the American Express Box Office at Barclays Center. Group discounts are available by calling 844-BKLYN-GP.

Here is what the fighters had to say Thursday at Barclays Center in Brooklyn:

“Everyone knows what I bring to the ring and you will see me at my best on Saturday. This fight means a lot to me and I’ve prepared with that mentality.

“I had a great fight against Jarrett Hurd. There was a height and weight difference on fight night but that whole experience is history now. My focus is on Castaño and making this another great fight. It’s great to be a part of awards like Fight of the Year, but now I have to move on to what is next.

“This is my third time fighting at Barclays Center and its always extra motivation. We’ll see what happens on Saturday but I’m prepared for anything my opponent brings to the ring.

“I’m excited for this fight. I’m just ready to fight. It’s great to have another chance to fight for a world title and work toward getting my top spot back.

“Everything in this fight is going to be important. My experience, the styles of the fighters and our power. It’s all going to play a big role in this fight.

“I just want the biggest fights. There are a lot of great fighters at this weight and around it. I’m going to be ready for anyone who steps up to the challenge.

“I’m here to win and show everyone that I’m the best 154-pounder in the world. I’m going to take a big step in cleaning out the division on Saturday. I’m going to be at my best and bring home the victory.”

“I breathe boxing and people are going to see that on Saturday night. I’m going to show them that I’m a great boxer and I’ve prepared to beat the best.

“There’s nothing left to say, on Saturday night, it’s going to be a war. The best fighting the best. This is a truly elite super welterweight I’m facing and that’s what I want. I want to face the best.

“A fight is a fight. It doesn’t matter who is in front of me. Lara is a great fighter, but we have to beat him to get where we want to go. This is the path we’ve chosen to get to that ultimate goal.

“I think Lara and I are both very well-conditioned and well-prepared for this fight. I’m in the final stages of my work for this fight. All of the toughest and hardest work is already done.

“I’m anxious to get in the ring and hear that first bell. I can’t wait to go in there and get to work on Saturday night.

“I worked so hard for this fight because I know how much is at stake. I’ve been looking for this fight, even before Lara lost to Hurd. Luckily everything came together for me to fight Lara on Saturday.

“I am a crowd-pleasing fighter. I’m going to be aggressive. That’s just my style. But I can also adapt to my opponent. You have to do different things to win a fight of this caliber.”

“Everybody knows I don’t talk a lot and prefer to make my name in the ring. On Saturday you’re going to see what I do best and that’s throw punches. That’s my job.

“This is a big fight for me to prove that I deserve another shot at the title. In my heart I still believe I had that fight against Deontay Wilder in my hands. It was mine to win. Hopefully he will step up and face me again.

“Christian Hammer says that he’s coming to win so he better come with a lot of energy. I’m ready for him and anyone else who steps up to the challenge.

“I fight for my family and I bring that passion into the gym every day. You will see it in the ring Saturday night. I hope that Hammer has prepared because I’m leaving it all in the ring like I always do.

“My focus is completely on Christian Hammer. I’ve been doing this for a long time and I know what it takes to be at my best. After this fight, I’ll see where we’re at and see which of the top heavyweights will be available to me.

“I’ve had great preparation and I’m here to win. I feel good and I’m ready to deliver a great performance.

“I will always be ready to take on the biggest challenges. I have great preparation in camp, working with lots of strong power southpaws and also fighters who can box. I’m ready for anything Luis Ortiz comes with.

“I’m completely focused on this fight. I’m here to cancel his plans for a Wilder rematch. I’m going to put myself in a position for even more big fights.”

“I’m very happy to be here in this position. This is a great opportunity for me to show my skills on a big stage here in Brooklyn.

“This is going to be an action fight. We both want to prove that we have what it takes to fight the best in the division. I’m not going to let him stand in my way of getting to where I want.

“I’m going to save my words and bring the action into the ring on Saturday night. I’m going to get this victory.

“I’m ready for this challenge. This is a big moment for my career. I’m very thankful to everyone who helped me get to this big fight and this moment.

“My style is to be aggressive. I bring the classic Mexican style into the ring. He better be prepared because I’m coming to take this fight.”

“This is another terrific card at Barclays Center in Brooklyn. Once again its Premier Boxing Champions bringing the greatest stable of fighters in the world to the fans as part of a major card on SHOWTIME.

“This is a significant card with competitive fights. If you’re a fight fan, these are the fights you want to see. There will be good action and the fights will lead the winners to somewhere bigger.

“The winner between De Gracia and Rodriguez should be very competitive, there are tough guys and they’re ready to throw down. The winner of this fight has a significant matchup ahead down the road.

“Nobody wants to fight ‘King Kong’. Luis Ortiz is one of the scariest guys in the division. Christian Hammer is a fighter who is capable of going into the ring with the greatest heavyweights in the world and putting a durable and competitive fight. One of these big guys is going down.

“The main event is a great fight. Castaño is a tremendous fighter but he has his hands full Saturday night. Lara is an elite fighter and one of the hardest guys in boxing to beat. He’s capable of making adjustment in the ring to win. For every young fighter there is a championship moment, and on Saturday it’s put up or shut up time for Brian Castaño against a truly top-level fighter.”

“We are thrilled to be back at Barclays Center. This is an all-action card of intriguing fights. Really, we are highlighting maybe what are three of the most interesting and deepest divisions in boxing right now: super welterweight, heavyweight and featherweight. Those of you who are regular viewers of SHOWTIME Boxing will recognize the names and these are the three of the divisions that SHOWTIME has focused on over the last several years because they are exciting and they are filled with great talent.

“The 154-pound division is one of the deepest and most exciting in boxing. [Lara-Castaño] is a fight-fans’ fight with longtime star Erislandy Lara taking on newcomer Brian Castaño, who has generated quickly a lot of buzz among those who think he might be the next big thing. In our co-feature we have fan-favorite Luis “King Kong” Ortiz. Again, the heavyweight division is now as exciting and interesting as it’s been at any point in the last 20 years. Our opening fight is in the featherweight division. This is another deep, talented division where SHOWTIME has over and over again showcased the best fighters and the biggest fights.

“Bryan De Gracia is here to make a name for himself and if you don’t know him, this is a fight you should pay attention to. Eduardo Ramirez has only one blemish on his record and that’s a decision loss to champion Lee Selby. He’s from Los Mochis, Mexico. For those of you who know anything about Los Mochis, there’s something in the water there because they just turn out great boxer after great boxer.”

“We are excited to welcome everyone back for our second PBC fight of the year. I’m excited to welcome back to town great Cuban fighters who have shown all their skills here before. The last time Ortiz was here, it was probably the most exciting fight we’ve had here at Barclays Center when he fought Deontay Wilder.

“I want to welcome Brian Castaño and Christian Hammer to Barclays Center for the first time. You’ll get a taste about what boxing in BROOKLYN BOXING is all about. “We think that this will be the best year yet for BROOKLYN BOXING. We want to bring the best fights right here to Brooklyn and do it in a way that’s continuous. Saturday night should be very exciting and I’m looking forward to seeing everyone there.”

“We think that this will be the best year yet for BROOKLYN BOXING. We want to bring the best fights right here to Brooklyn and do it in a way that’s continuous. Saturday night should be very exciting and I’m looking forward to seeing everyone there.”