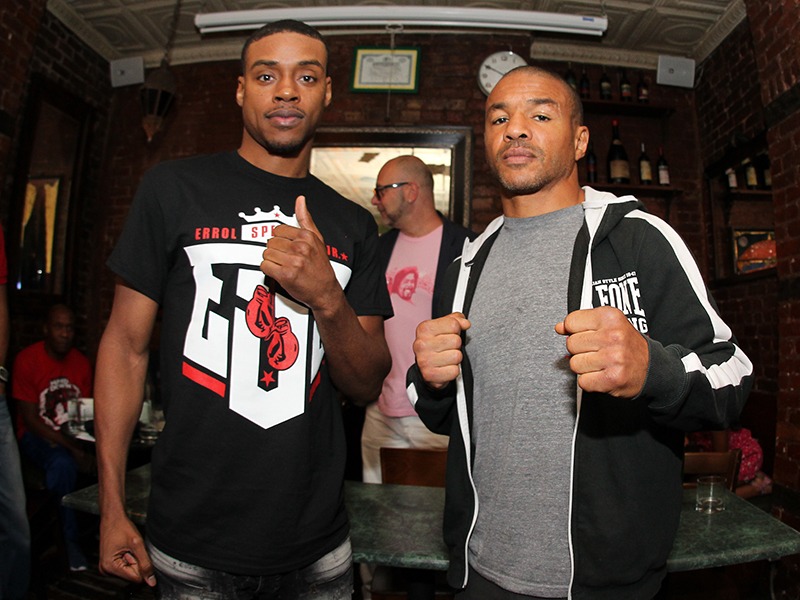 BROOKLYN (July 19, 2016) – Undefeated rising star Errol “The Truth” Spence Jr. (20-0, 17 KOs) is set to take on once-beaten contender Leonard “The Lion” Bundu (33-1-2, 12 KOs) in a 12-round welterweight world title eliminator that headlines Premier Boxing Champions (PBC) on NBC Sunday, August 21 from Ford Amphitheater at Coney Island Boardwalk in Brooklyn.
The action on NBC begins at 5 p.m. ET/2 p.m. PT following coverage of the Olympic Men’s Basketball Gold Medal Game. The 2012 U.S. Olympian Spence Jr. will look to move one step closer to becoming the second member of the 2012 U.S. Olympic boxing team to win a world title after Rau’shee Warren won a bantamweight championship in June.
Tickets for the live event, which is promoted by DiBella Entertainment and presented by BROOKLYN BOXING™, start at $35. Presale tickets are available now with public on-sale beginning tomorrow at 10 a.m. Tickets can be purchased online by visiting www.ticketmaster.com and fordamphitheaterconeyisland.com.
“This is another great opportunity for me to gain exposure on NBC,” said Spence Jr. “A lot of people will be watching because of the Olympics that may not have known my name before. As an Olympian, headlining a major event four years after my Olympic run is exciting. Bundu is an older fighter, but he’s tough and has a lot of experience. He fought well against Keith Thurman. Thurman outboxed him but couldn’t knock him out. I think I can make a big statement in the division if I can stop him, as I did with Chris Algieri.”
“I am going to use my experience to my advantage on August 21,” said Bundu. “When I fought Thurman I ended up being overcautious, but that will not be the case this time. I know it’s now or never for me and I won’t let this chance slip away. Spence will come forward but that will work to my advantage because I love fighting on the inside. I’m going to show Spence a few things that he hasn’t seen before.”
The brand new Ford Amphitheater at Coney Island Boardwalk builds on the rich history of the sweet science in the Brooklyn neighborhood. Several heavyweight title fights took place on Coney Island at the turn of the 20th century, including James J. Jeffries’ heavyweight world title knock out of Bob Fitzsimmons in the 11th round on June 9, 1899. Jeffries would then defend the title two more times on Coney Island with a points victory over Tom Sharkey and a knockout in the 23rd round against James J. Corbett. Lightweight great Joe Gans and former middleweight champion “Nonpareil” Jack Dempsey also boxed in Coney Island.
“It is exciting to have rising star Errol Spence headlining the inaugural boxing event held on August 21 at the new Ford Amphitheater at the historic Coney Island Boardwalk,” said Lou DiBella, President of DiBella Entertainment. “Spence is one of the most gifted young fighters in all of boxing and is on track to be a world champion. He will face off against Leonard Bundu, in a final elimination bout, to become the mandatory for the IBF welterweight title, currently held by Kell Brook.”
An Olympian who boasted a highly decorated amateur career, the 26-year-old Spence Jr.is coming off a dominating performance in which he stopped former world champion Chris Algieri in the fifth-round in a PBC on NBC main event.  Spence Jr. is widely regarded as a future star in the sport and was dominant in his previous NBC appearances when he stopped Phil Lo Greco in the third round in June. His impressive 2015 also included TKO victories over Chris van Heerden, Samuel Vargas and Alejandro Barrera, culminating with him being named ESPN’s Prospect of the Year. Now, he looks to secure himself a world title shot.
Originally from Sierra Leone but fighting out of Toscana, Italy, Bundu represented Italy at the 2000 Olympic games where he defeated eventual world champion Daniel Geale. A former European welterweight champion, he owns victories over Frankie Gavin, Lee Purdy and Ismael El Massoudi in addition to going the distance in defeat against Keith Thurman. Bundu comes into this bout with victories over Pablo Munguia and Jussi Koivula in his last two bouts.
Barclays Center’s BROOKLYN BOXING™ programming platform is presented by AARP. PBC on NBC is sponsored by Corona, La Cerveza Mas Fina.
For more information visit www.premierboxingchampions.com and www.nbcsports.com/boxing, follow on Twitter @PremierBoxing,@ErrolSpenceJr, @LouDiBella, @NBCSports, @BarclaysCenter and @Swanson_Comm or become a fan on Facebook at www.Facebook.com/PremierBoxingChampions, www.facebook.com/NBCSports, www.Facebook.com/DiBellaEntertainment and www.Facebook.com/barclayscenter. Highlights available at www.youtube.com/premierboxingchampions.
CONTACTS:
Swanson Communications: (202) 783-5500
Tim Smith, Premier Boxing Champions: timothy@haymonboxing.com
DiBella Entertainment: (212) 947-2577
Barry Baum, Brooklyn Sports & Entertainment: (718) 942-9533
Credentials: www.magnamedia.com
Website Admin