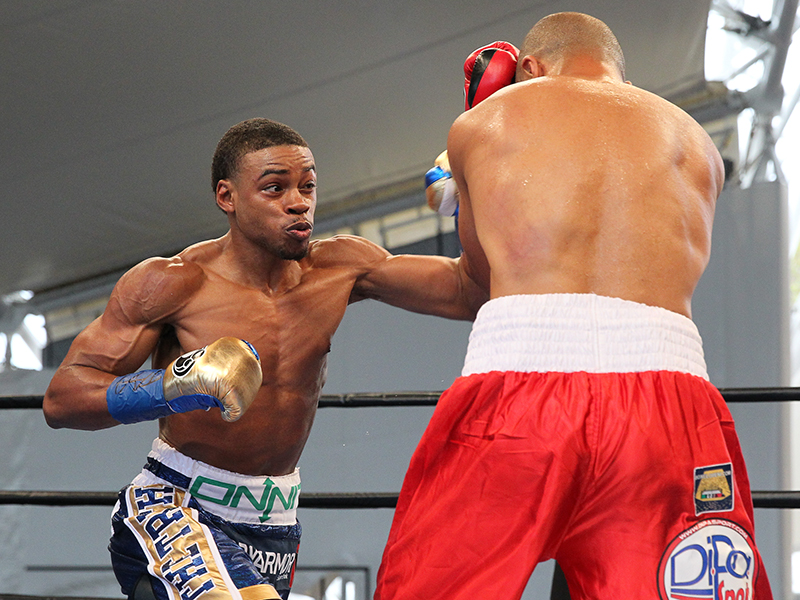 With the knockout, Spence Jr. becomes the mandatory challenger for undefeated welterweight Kell Brook and showed his willingness to step in the ring with Brook.

“I definitely want my shot at Kell Brook and his title,” said Spence Jr. “I want him next. If he vacates or gets stripped then I’ll fight for his vacant title. I’ve paid my dues.”

In a prime spot that immediately followed the U.S. Men’s basketball team winning Olympic gold in Rio, the Dallas-native started patiently, measuring his opponent with steady jabs. Bundu came ready to fight and tried to make it difficult for Spence Jr. by switching stances and attacking from awkward angles.

“I was a little shakey in the first round and second rounds,” said Spence Jr. “He’s very awkward and I was trying to feel him out.”

Spence Jr. began to pick up his power punching as the rounds went on and started to connect with left uppercuts and hooks. After round four, Bundu returned to his corner with swelling beginning to show up over his right eye.

“Once I was able to catch his rhythm and figure him out, I knew I had him,” said Spence Jr. “I knew he was very tough, but he never hurt me. He was switching and jumping in and out and it took me a little bit to adjust to.”

The dominance with his power punches began to wear Bundu down as the fight entered the sixth. After seemingly scoring a knockdown, which was ruled a slip by referee Johnny Callas, Spence Jr. quickly pounced on Bundu and trapped him in the corner.

“He certainly lived up to the hype,” said Bundu, who was taken to the hospital for evaluation after the fight. “Errol was more precise than Keith Thurman. Errol threw more punches and was fresh in every round.”

It didn’t take long for Spence Jr. to take advantage as he hit Bundu with a hard left uppercut and followed with a crushing right hook that put Bundu on the mat for good and forced the referee to stop the fight at 2:06 of the sixth-round.

“I really tried to get up but I couldn’t,” said Bundu, who had never been stopped before. “I am okay though. I feel good.”

Spence Jr. won every round on all three judges’ cards and landed a staggering 64 percent of his power punches, per Compubox.

“I think this performance showed once again that I am one of the top fighters at 147-pounds,” said Spence Jr.

“This is how champions perform,” said Marrero. “They do it smart and they figure out their opponents quickly. Regardless of his record, you have to figure it out and then go for the finish.”

Marrero was in control from the outset, putting Hinojosa on the mat with a right hand early in the first stanza. Hinojosa tried to keep himself in the fight by throwing primarily power punches. However, it was Marrero who was much sharper in that department, landing 60 percent of his power punches to just 24 percent from Hinojosa.

In the fourth-round Marrero’s power and style proved to be too much as he consistently beat Hinojosa to the punch on his way three fourth-round knockdowns of Hinojosa. The final barrage and knockdown forced referee Danny Schiavone to stop the bout at 2:55 of the round.

“I’m glad that Hinojosa was brave enough to take the fight,” said Marrero. “I’ll fight anybody. I don’t care how short the notice is.

“I’ve endured my loss to Jesus Cuellar and I feel like I’m back at the top of the contenders in the featherweight division. The champions keep running from me so I’m going to keep working until I’m the mandatory and can get another title shot.”

On the same day that Flint, Michigan’s Claressa Shields won her second consecutive Olympic Gold medal for the U.S., women’s boxing was given another great platform as Brooklyn’s Heather “The Heat” Hardy (18-0, 4 KOs) earned a majority decision over previously unbeaten Shelly “Shelito’s Way” Vincent (18-1, 1 KO) in their 10-round bout.

“This is definitely a win for women’s boxing,” said Hardy. “We kept up a great pace throughout and the fans were invested the whole time.”

The action was non-stop from the beginning, as Vincent charged in early and often looking to close the distance between her and the taller Hardy. Hardy was the more mobile fighter as she circled the ring looking to find the right distance to attack the Providence-native.

“Every time she crowded me, she would get off more punches,” said Hardy. “I wanted to keep the fight on the outside and when I did that I had a lot of success.”

The longtime rivals were able to live up the hype that their matchup drew. The action was non-stop and it appeared that neither woman would be able to build a big lead on the scorecards.

Hardy’s movement allowed her to create more angles for her attack as she varied her offense with overhand rights, jabs and hooks. Vincent was consistent countering, especially with her left hand that yielded much success.

The punch stats reflected the exciting nature of the fight as Hardy threw 752 punches while Shelly threw 678 across 10 two-minute rounds. It was Hardy who had the advantage in punches landed as she connected on 251 punches compared to 194 for Vincent.

“I thought I won the fight pretty convincingly,” said Hardy. “She only really caught me a few times the whole fight. I knew I had to be tactical to win the fight. Judging by the belt around my waist, I would rate my performance a 10.”

Power punches were a key to the fight, with the two combatants combining for 955 power punches thrown. Hardy’s biggest advantage came in this department as she landed over 50 percent of her power shots to 34 percent from Vincent.

In the end, the judges ruled the bout a majority decision for Hardy by scores of 99-91, 97-93 and 95-95. Vincent believed she had done enough to win the fight and expressed her displeasure with the judges scores afterwards

“I definitely thought I won the fight,” said Vincent. “I was coming forward and I landed the bigger shots. Everyone saw the fight.

“I got head-butted all night long. I came here and everybody told me I’d get robbed. I’ll take the rematch but I’m not playing by these rules. I want her to come up to Providence.”