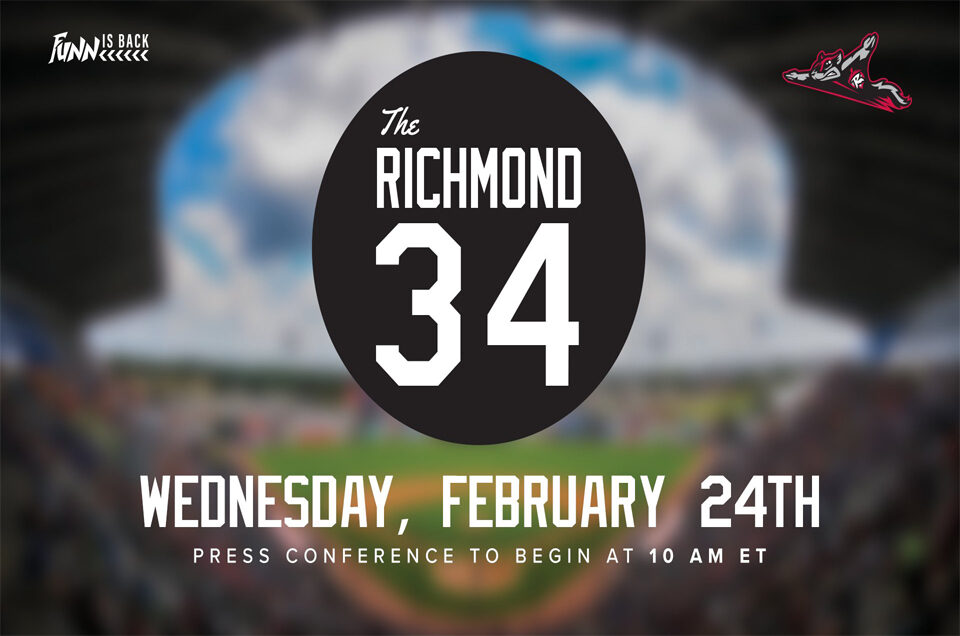 The Richmond Flying Squirrels announced multiple new initiatives on Monday that the team will be implementing beginning in 2021 to celebrate the legacy of the Richmond 34.

On February 22, 1960, 34 Virginia Union University students were arrested following a peaceful sit-in protest at the whites-only lunch counter of Thalhimers Department Store in downtown Richmond. The Richmond 34 sit-in ultimately led to the integration of Thalhimers and influenced legislation in the Civil Rights Act of 1962.

The Flying Squirrels will be permanently retiring the No. 34 from on-field use to honor the Richmond 34’s legacy. It is the second number retired by the team, joining Jackie Robinson’s No. 42, which was retired by Major League Baseball in 1997.

“The Richmond 34 are heroes in the push for civil rights,” Flying Squirrels CEO Todd “Parney” Parnell said. “We are more than thrilled to celebrate their legacy and tell their story to new generations, working hard together to positively affect our community twelve months a year.”

The Richmond 34 Legacy Mural, painted by Andre Shank, was dedicated at The Diamond. Shank is a Richmond-based painter and sculptor who originally painted the mural that wraps around the façade of The Diamond during the RVA Street Art Festival in 2017. The Richmond 34 Legacy mural is positioned on The Diamond’s upper façade directly behind home plate and stretches 100 feet wide and 20 feet tall. It will be visible to all fans who enter The Diamond gates as well as motorists passing by on Arthur Ashe Boulevard and south-bound travelers on Interstate 95.

The Flying Squirrels will host a two-day “Richmond 34 Legacy Weekend” event beginning in 2021 to celebrate the contributions of the Richmond 34 to the Civil Rights Movement as well as other local leaders both past and present who have made contributions in the push for social justice and racial equality. The event will include a T-shirt giveaway featuring an “End Racism” design, a collaborative work from Noah Scalin X The Cheats Movement.

“The Richmond Flying Squirrels are making a strong, clear stand that they are a great community partner committed to positive change,” Scalin said. “It’s so important that we recognize Richmond’s civil rights history as we build towards a better future and I’m proud that I can be a part of this initiative.”

“Noah Scalin and I are honored to be a part of such a historic weekend,” Marc Cheatham of The Cheats Movement said. “The fight for social justice and equality is ever ongoing. We believe community partners must be proactive in advocating for an inclusive and welcoming future. The Flying Squirrels are committed to diversity and inclusion. They are standing in solidarity with the community against racism and injustice, and their actions prove a commitment far greater than one weekend. It is an honor to partner with them and play a role in this tremendous effort.”

The official mission of the Richmond 34 Legacy Campaign is “to promote justice, peace, racial equality and diversity by creating innovative and exciting educational opportunities that utilize relevant information from the past to help students understand the present with the purpose of empowering them to advocate for a better future for all people.”

“As ambassador, I am proud to represent these two organizations which stand for justice, peace, diversity and racial equality,” Johnson Rice said. “Our mission is to learn from lessons of the past, embrace with passion the present and to be proactive with technology and creativity for the future. I have a dream for all parents and students that will create greatness and excitement here in Richmond. It is an honor to represent this organization as their ambassador.”

In partnership with Virginia State University and Virginia Union University, the Flying Squirrels will offer students at both institutions opportunities to gain professional experience working with the organization in various capacities. The programs will be designed to create a more diverse and inclusive workforce with the goal of elevating more minorities into leadership positions throughout the professional baseball industry. Details of the program with both schools will be announced at a later date.

“Since its founding, Virginia Union University has been at the forefront of calls for racial, economic and social equality,” Dr. Hakim J. Lucas, President and CEO of Virginia Union University said. “The Richmond 34 represents an iconic moment in VUU’s history, as well as a pivotal moment in the national civil rights movement. We are proud that their legacy is being celebrated by the Richmond Flying Squirrels. I want to thank the Flying Squirrels for partnering with us to create equal opportunities for underrepresented students of color allowing them to gain valuable workforce training and entry to leadership roles within the professional baseball industry.”

Information about the Flying Squirrels’ Richmond 34 initiatives can be found here.