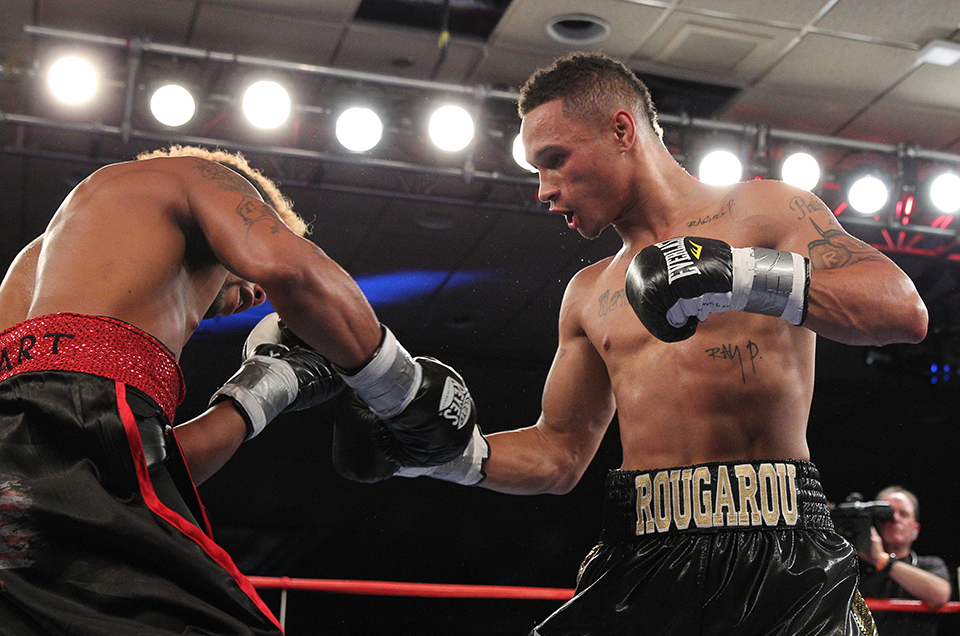 HOUSTON (Feb. 15, 2018) – Undefeated 140-pound contender Regis “Rougarou” Prograis remains focused on the prize despite the recent change in opponent for hisMarch 9 showdown for the Interim WBC Super Lightweight World Championship. Prograis will now face former unified world champion Julius Indongo in the 12-round main event of a SHOWTIME BOXING: SPECIAL EDITION live on SHOWTIME at 10 p.m. ET/PT from Deadwood Mountain Grand in Deadwood, South Dakota.
The southpaw Indongo replaced Viktor Postol, who was forced to withdraw from the bout on Monday with a hand injury.
“Lou called and told me about what happened to Viktor Postol and that Indongo could be the new opponent and I said yes immediately,” said Prograis. “I always want to fight the best and with Indongo being a former unified champion, he brings a great deal of credibility to the fight. Both of his titles were won on the road in Russia and Scotland, so I know how fearless and determined he will be.
“I had to switch up my training a little for sparring with Indongo being a lefty and a little taller, but I’m sparring with middleweights. I’ve heard how hard he hits and I want to be fully prepared. Maybe down the line Postol and I could still fight, but I’m only focused on Indongo now. This is my time and my year to shine. I’m ready to put on a spectacular performance on March 9.“
“This fight came together in a matter of two phone calls – one to Prograis and one to Indongo – and that speaks volumes about the championship mentality of both fighters,” said Lou DiBella, President of DiBella Entertainment. “Prograis wanted to fight the best fighter available, even if that fighter presented a different style and was recently a unified champion. Indongo immediately jumped at the opportunity to again be a champion. They are true professionals and their desire to fight will be evident in the ring.”
The event is presented by DiBella Entertainment, in association with Fight Promotions Inc., Holden Productions and Sauerland Promotions. Tickets, priced at $200, $80 and $60, are on sale now and can be purchased on Ticketmaster.com or by calling (877) 907-4726. The doors open and first bout begins at 5:30 p.m. More information on Deadwood Mountain Grand can be found on their website at www.DeadwoodMountainGrand.com.
Fighting out of Namibia and now training in Omaha, NE, Indongo (22-1, 11 KOs) is a former unified champion who held the IBF and WBA 140-pound titles.
In 2016, Indongo traveled to Moscow, Russia, to dethrone IBF Junior Welterweight Champion Eduard Troyanovsky with a stunning first-round knockout. In his first defense, Indongo traveled to Glasgow, Scotland, for a unification bout with WBA Champion Ricky Burns. The 35-year-old won a 12-round unanimous decision to become unified champion.
In his first bout as a unified titleholder, Indongo made his U.S. debut against fellow undefeated and unified champion Terence Crawford in a showdown to determine the undisputed champion of the 140-pound division. It was the first championship bout with all four major world titles at stake since Jermain Taylor dethroned Bernard Hopkins in 2005. Indongo lost to Crawford to suffer the only defeat of his professional career.
Prograis (20-0, 17 KOs), of Houston by way of New Orleans, has scored knockouts in 13 of his last 14 fights and is a rising star in the wide-open 140-pound division. Indongo represents the toughest challenge of his career.
In the 12-round co-feature, undefeated 140-pound contenders Ivan Baranchyk (17-0, 10 KOs) and Anthony Yigit (21-0-1, 7 KOs) will square off in a Junior Welterweight World Title Eliminator to become the mandatory challenger for IBF champion Sergey Lipinets. Lipinets will defend his belt the following day, March 10, on SHOWTIME CHAMPIONSHIP BOXING® against undefeated three-division champion Mikey Garcia.
# # #
CONTACTS:
Bernie Bahrmasel, DiBella Entertainment: (773) 592-2986
Susan Kightlinger, Deadwood Mountain Grand: (605) 390-3738
Chris DeBlasio, Showtime Networks Inc.: (212) 708-1633
Matt Donovan, Showtime Networks Inc.: (212) 708-1663
Flo Jocou, Showtime Networks Inc.: (212) 708-7319
Steve Pratt, BZA/Showtime: (310) 408-4555
Website Admin