FOLLOWING THE TRAGIC LOSS OF HIS FATHER AND TRAINER IRISH CONTENDER PATRICK HYLAND CARRIES A HEAVY HEART AS HE LOOKS TO FIND SOLACE IN THE RING ON SATURDAY NIGHT RETURNS ON THE UNDERCARD OF PBC ON NBCSN AT LOWELL MEMORIAL AUDITORIUM IN LOWELL, MASS 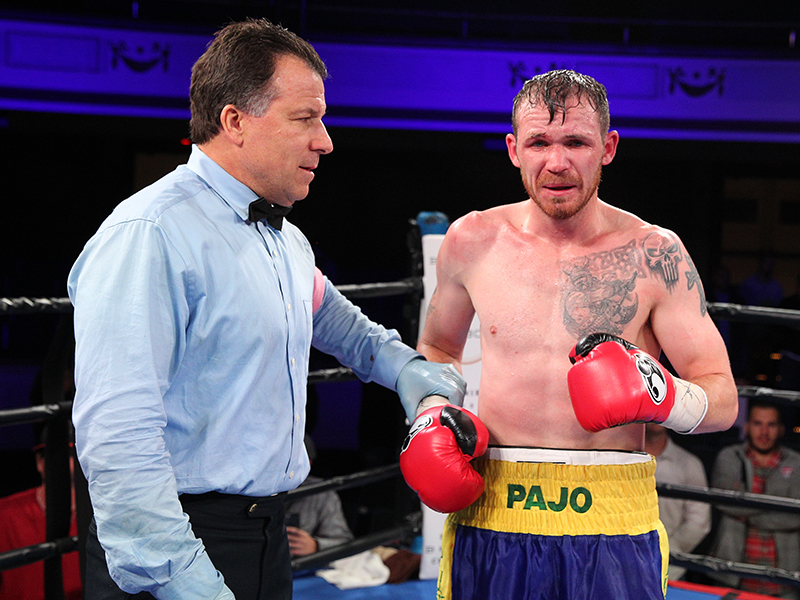 RETURNS ON THE UNDERCARD OF PBC ON NBCSN AT LOWELL MEMORIAL AUDITORIUM IN LOWELL, MASS.

LOWELL, Mass. (10/9/15) – On Saturday night, Irish world-rated contender Patrick Hyland (30-1, 14 KOs) faces David Martinez on the undercard of the PBC on NBCSN  event from Lowell, Mass. The fight won’t be shown on television, Hyland views this is the most important fight of his career as he works his way back into world title contention.
The bout on Saturday night will be the first in a career that dates back to his days as a 9-year-old amateur in Ireland where his trainer, father and best friend Patrick Sr. will not be in his corner. Patrick Sr., better known as Paddy, tragically passed away in the spring of this year. Leaving the Irish boxing community shocked.
“I hear his voice in the back of my head every day. Every day. Especially in the gym though when I am training,” said Hyland Jr.
The loss of Hyland’s father came just weeks before Hyland’s wife Lorna gave birth to their first child, Callum, further adding to the significance of this fight.
“I challenged Javier Fortuna for the world championship,” said Hyland. “I won the Irish world title. I have fought at MGM Grand, the O2 Arena and Madison Square Garden. For me though, this is the most important fight of my career. Not only am I fighting for my newborn son, but I am fighting to keep my father’s legacy alive. He made me the man that I am today and the man that I want my son to one day become. Winning a world title was our dream that we had together. He was always pushing me and my brothers to be the absolute best that we can be, and I won’t stop until I get another crack at a world title.”
The bout on Saturday night will be Hyland’s fourth since the lone loss of his career, a highly entertaining 12-round decision for the interim featherweight title against now-reigning super featherweight champion Javier Fortuna.  Following the loss to Fortuna, Hyland was out of action for a year and a half, as he sorted through promotional issues. Hyland signed with DiBella Entertainment in June of 2014 and has since put together three impressive victories. Hyland believes that he will be knocking on the door to challenge for another world title in 2016.
“I have a great team behind me. My manager Brian Peters and promoter Lou DiBella are working hard,” continued Hyland. “As long as I continue to win and do what I need to do, I know they will get me the opportunity to prove myself and show that I am one of the best 126-pounders in the world. 2016 is going to be a big year for me and I fully expect to once again be challenging for a piece of the featherweight crown.”
Tickets for the live event, which is promoted by DiBella Entertainment in association with Murphys Boxing, are on sale and priced at $125, $85, $50 and $35, not including applicable service charges and taxes. Special student, veteran and senior ticket prices also available. For tickets, visit www.lowellauditorium.com
# # #
For more information visit www.premierboxingchampions.com www.nbcsports.com/boxing, www.lowellauditorium.com and www.dbe1.com, follow on Twitter @PremierBoxing,  @LouDiBella, @DropkickMurphys, @MurphysBoxing, @DOC_Boxing, @TeamBracero, @NBCSports and @Swanson_Comm and become a fan on Facebook at www.Facebook.com/PremierBoxingChampions, www.facebook.com/NBCSports, www.Facebook.com/DropkickMurphys,www.facebook.com/MurphysBoxing and www.facebook.com/DiBellaEntertainment.
CONTACTS: Swanson Communications: (202) 783-5500
Michael Donahue, Premier Boxing Champions: (630) 441-8080
Kevin Rooney, DiBella Entertainment: (212) 947-2577
Sean Sullivan, Murphys Boxing: Sean.sullivan@murphysboxing.com
Brian Krajewski, Lowell Auditorium: Brian_Krajewski@uml.edu
Credentials: www.magnamedia.com
Website Admin