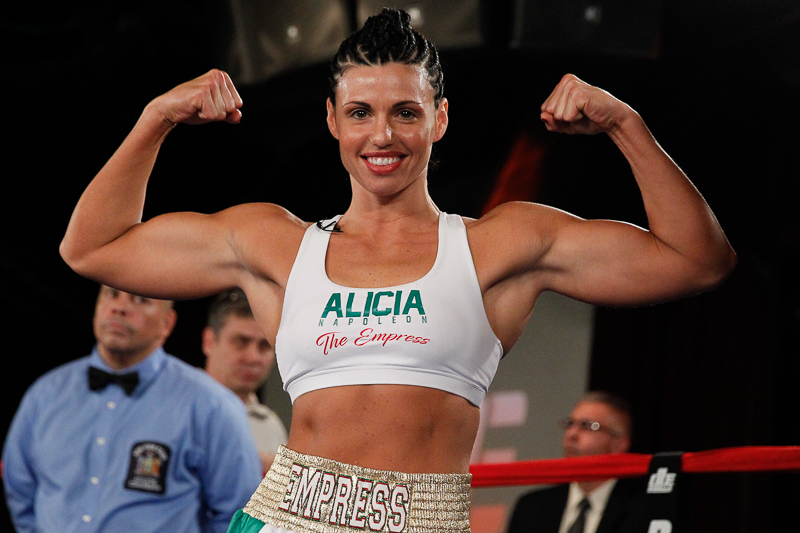 Former world champion Alicia “The Empress” Napoleon-Espinosa (12-2, 7 KOs), from Lindenhurst, Long Island, NY, publicly announced her pregnancy in yesterday’s New York Newsday newspaper. The newly married Napoleon-Espinosa originally intended to have a baby at the conclusion of her boxing career. However, as the pandemic began to stall sporting events, putting her pugilistic career on hold, Napoleon-Espinosa decided to take advantage of her time out of the ring and try to get pregnant. She is now due to give birth to a baby girl in March.

“My due date is March 26, which is nice to be delivering my daughter during National Women’s History Month. I’m going to be bringing in a future trailblazer and pioneer in whatever my daughter tries to do. I know that she will be strong-willed like her mother.

“I am grateful that I made this decision to get pregnant now. The pandemic hit shortly after my last fight, and I knew I probably wouldn’t be able to fight again for the rest of the year, and, so far, 2021 isn’t looking much better. It is a very difficult time for the majority of fighters, who have had to put their careers on hold due to the pandemic. Only a small percentage of all the fighters out there have thus far been able to get opportunities to box,” said Napoleon-Espinosa.

“What the pandemic has done is set back the careers of too many women boxers who deserve better. But Alicia moved ahead with major life goals, it was a wonderful example of planning and she did the right thing for her and her family,” Lou DiBella, President of DiBella Entertainment, told Newsday.

“I want to get back into the ring as soon as possible after giving birth,” continued Napoleon-Espinosa. “It all depends on my delivery and how much time I will need to heal. It will be a challenge to get myself back into fighting shape, but I believe I will be stronger, physically and mentally, when I do return. Of course, I’d love to get back to Gleason’s Gym or my gym, Overthrow Boxing Club, but I now have a home gym set up, so that will help. When the time comes, and it’s safe to do so, I can’t wait to bring my baby to the gym with me to watch me train.

“It’s important to me to dispel certain myths and the old mentality of motherhood that I have to give up my career and to prove that, after giving birth, I can accomplish even more than before. There are a lot of powerhouse mothers out there and I want to be one of them. My goals and dreams will be even sweeter now.

“I wouldn’t change anything with how my last fight played out. It was an amazing fight between me and Elin Cederroos; we stole the show that night. It was a very close fight and I lost by one point. I’m not mad, I’m grateful. I gained a lot of fans that night. I proved that I can fight hard and come back after getting knocked down. I proved to myself that I can shake it off and continue fighting, giving me more confidence for future fights, knowing what I can handle. There’s always room to grow, even if I had won. I feel even more motivated now to regain my title, especially with my daughter by my side.

“Had I won, I may not have made the decision to become a mother at this time. I’m very driven and goal-oriented, always asking what’s next. Seeing the pandemic shut everything down, a lightbulb went off and I told myself that it was time to have my baby. The loss was a blessing, giving me the opportunity to embrace motherhood. I have my husband and stepdaughters, but now I can have them and my new baby by my side as I regain my title. I won’t have to wait to start a family.

“I won a world title, but becoming a mother is one of the greatest titles I’ll ever have.”

Napoleon-Espinosa captured the WBA super middleweight world title on March 3, 2018, defeating Femke Hermans via 10-round unanimous decision at Barclays Center, in Brooklyn, NY. Successful title defenses against Hannah Rankin and Schemelle Baldwin followed. On January 10, 2020, Napoleon-Espinosa took on Sweden’s Elin Cederroos in Atlantic City, NJ, losing a decision via three identical scorecards of 95-94, in what was one of the year’s best fights in women’s boxing. Before her 2014 pro debut, Napoleon-Espinosa competed as an amateur for nine years, winning 11 amateur titles nationally, including two New York Golden Gloves championships and a National Golden Gloves title.