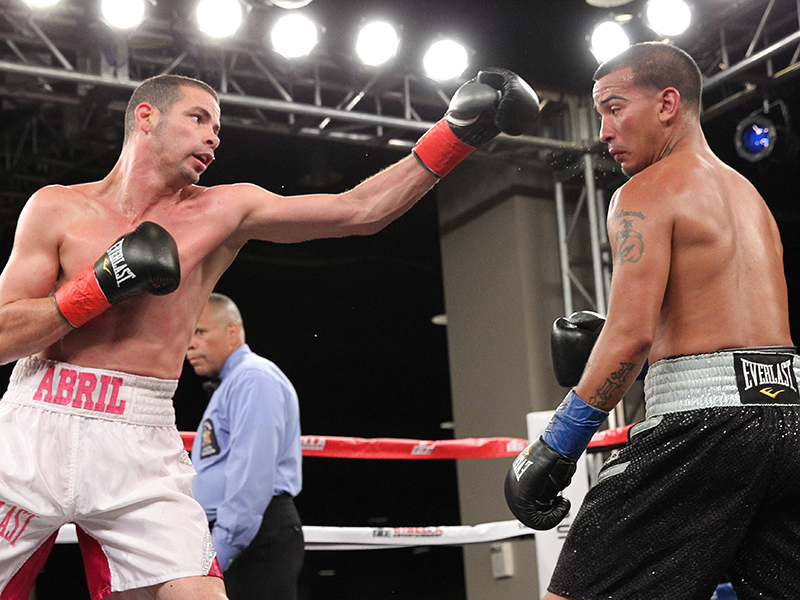 YURI FOREMAN CONTINUES COMEBACK WITH DEVASTATING TKO
RESORTS WORLD CASINO NEW YORK CITY
Queens, NY (6/4/16) – On Friday night, DiBella Entertainment returned to Resorts World Casino New York City with another action-packed nine-bout card for the latest installment of its popular “Broadway Boxing” series, proudly sponsored by Nissan of Queens.
The evening concluded with a slugfest featuring female fighters Alicia Napoleon, 153½, of Lindenhurst, NY, and Latasha Burton, 162, of New Orleans, LA, facing off in a rematch scheduled for eight rounds. There were plenty of shifts in momentum with each taking control at times while dishing out heavy artillery. Napoleon began applying pressure from the outset but Burton soon found a home for her straight right counter. The Long Islander fought her way inside to land power shots in the second, but then Burton came back with her own in the third. A straight right stunned Burton in the next round, though she proved resilient to control the action in the fifth. Napoleon continued to stalk her foe and by the sixth, Burton was tiring. With Burton looking to clinch and slow down the pace, Napoleon sought openings on the inside. Intent on scoring a knockout, Napoleon stormed out of her corner in the eighth with an unrelenting attack of power shots resulting in a TKO stoppage at the 1:43 mark when several left hooks to the head were unanswered. Napoleon improved to 6-0 (5 KOs) and Burton is now 4-7. Having claimed the vacant WBC silver junior middleweight title in January, Napoleon is determined to secure a shot at a world title in the near future.

Returning for the first time since September 2014, former WBA lightweight champion Richar Abril, 139, of St. Petersburg, FL, engaged former world title challenger Jerry Belmontes, 138¾, of Corpus Christi, TX, in a 10-round tactical battle. Searching for countering opportunities, Abril felled Belmontes in the first with an overhand right. Abril was content to fight on the outside, while Belmontes, prone to loading up on his right hand, was simply not active enough overall. During the later rounds, Abril would take a half step back and land short countershots whenever the increasingly desperate Belmontes lunged in. Standing shoulder-to-shoulder over the final six minutes of action, Abril pelted Belmontes with hooks to the body. With scores of 96-93 twice, and 95-94, Abril upped his record to 20-3-1 (8 KOs) with a unanimous decision, while Belmontes suffered his ninth defeat, falling to 21-9 (6 KOs). Following his world title defense against previously unbeaten Edis Tatli (23-0) in September 2014, Abril was stricken with dengue fever that he contracted from a mosquito bite while training in Cuba to defend his title against Derry Matthews in early 2015. Abril was forced to vacate his title as he battled through the illness. Now back and 100 percent healthy, Abril will look to quickly regain his world championship under the DiBella Entertainment banner.

(Photo Credit: Ed Diller/DiBella Entertainment)
Notre Dame graduate and light heavyweight contender Mike Lee, 178¾, peppered Mike Snider, 178, of Flemington, WV, with combinations to the head and body for eight one-sided rounds. Outboxing his adversary, Lee expertly evaded Snider’s advances and often countered with devastating hooks and straight rights. In round four, a left hook dropped Snider. By the sixth, Lee’s uppercut became a prominent weapon. After eight rounds, the judges tallied 80-71 twice, 79-72, all for Lee via unanimous decision to up his record to 17-0 (10 KOs). Snider fell to 10-4-3 (5 KOs). Before graduating in 2009, the Chicago-native Lee claimed three Bengal Bout championships while fighting on Notre Dame’s boxing team. Lee then won the 2009 Chicago Golden Gloves and soon turned pro in 2010. In September 2011, Lee became a national spokesman for Subway Restaurants and continues to be featured in their nationally broadcast “Famous Fan” advertising campaigns. In 2011, Lee headlined the first-ever pro boxing event at the University of Notre Dame, donating more than $100,000 to Notre Dame Charities through The Mike Lee Foundation.
In his first fight scheduled for six rounds, 20-year-old fan-favorite Julian Sosa, 142½, of Brooklyn, earned a hard-fought split decision over a very game Isaac Johnson, 142¼, of Colorado Springs, CO. Early on, Sosa’s jab was key, bloodying Johnson’s nose in the first and keeping him at bay. However, Johnson was able to close the gap by round three and the bout turned into a brawl, featuring several exciting exchanges for the remainder of the contest. Landing pinpoint, accurate countershots, Sosa was still able to maintain control. Scorecards read 58-56 Johnson and 59-55 twice for Sosa, who upped his record to 5-0-1 (2 KOs). Johnson is now 2-2.
Far Rockaway cruiserweight prospect Joe Williams, 184, easily dispatched of
Lamar Harris, 183½, St. Louis, MO, quickly taking advantage of his defensive deficiencies. Left hooks hurt Harris, whose exposed chin provided a wide-open target, then a right hook dropped him in the first. Williams continued to land his left hook in round two and, after having seen Harris absorb enough punishment, the referee halted the action at the 2:38 mark. Williams improved to 9-0 (7 KOs), while Harris fell to 9-12-4 (5 KOs). A 2011 US Olympic Team Trials silver medalist, Williams won the 2012 National Golden Gloves heavyweight title and was a three-time NY Golden Gloves champion before turning pro.
Coming off his sensational TKO victory on the ShoBox series in December, Canadian middleweight contender Steve Rolls, 162½, of Toronto, impressively broke down southpaw Emmanuel Sanchez, 163¾, of Laredo, TX, over five rounds.
Rolls staggered Sanchez with a left hook to the temple early in the first then used that same punch effectively throughout, doubling and tripling up on it. An exhausted Sanchez, who had a point deducted in round five for excessive holding, was unable to come out of his corner for the sixth stanza and the bout was stopped, dipping his record to 7-5 (1 KO). Rolls, now 14-0 (8 KOs) as a pro, had a very successful amateur career, competing on the 2009 and 2010 Canadian National boxing teams, compiling an impressive 83-14 record in the process.
Making his NYC debut, former amateur standout and two-time National Golden Gloves champion Marquis Moore, 167½, of Temple Hills, MD, bobbed and weaved his way inside against the much taller, rangier Turner Williams, 165½, of Beckley, WV, unloading quick-fisted combinations until a left hook to the body doubled his foe over in the red corner. Moore landed a few more hooks to the midsection to force a stoppage at 1:20 of the opening frame, to even up his record at 2-2 (2 KOs). Williams dropped to 1-3. Moore, a member of the U.S. Army, who was honorably discharged after serving three years for our country, had an outstanding amateur career, compiling a 140-15 record. Moore also claimed the National PAL championship in 2015 and boxed at the U.S. Olympic trials.

Brooklyn’s former junior middleweight world champion and now ordained Orthodox rabbi Yuri Foreman continued his comeback with an impressive stoppage victory over Jason Davis, of Vancouver, WA. Foreman outboxed Davis with a stiff jab, directing it both upstairs and down, in the opener. Backing Davis to the ropes in the following frame, Foreman landed a left uppercut to drop his adversary. A flurry of hard shots resulted in a second knockdown and a left hook to the body produced the third. Foreman, now 34-2 (10 KOs), finally finished Davis off with another barrage that prompted a referee stoppage at the 1:55 mark of round two. Davis dropped to 13-12-2 (4 KOs).
Staten Island’s James Wilkins, 136¼, made a successful pro debut stopping Buffalo, New York’s Jack Grady, 140, inside two rounds. The stoppage came at the 2:49 mark. Wilkins’ speed and power proved too much for the upstate native Grady, now 0-4.
Website Admin