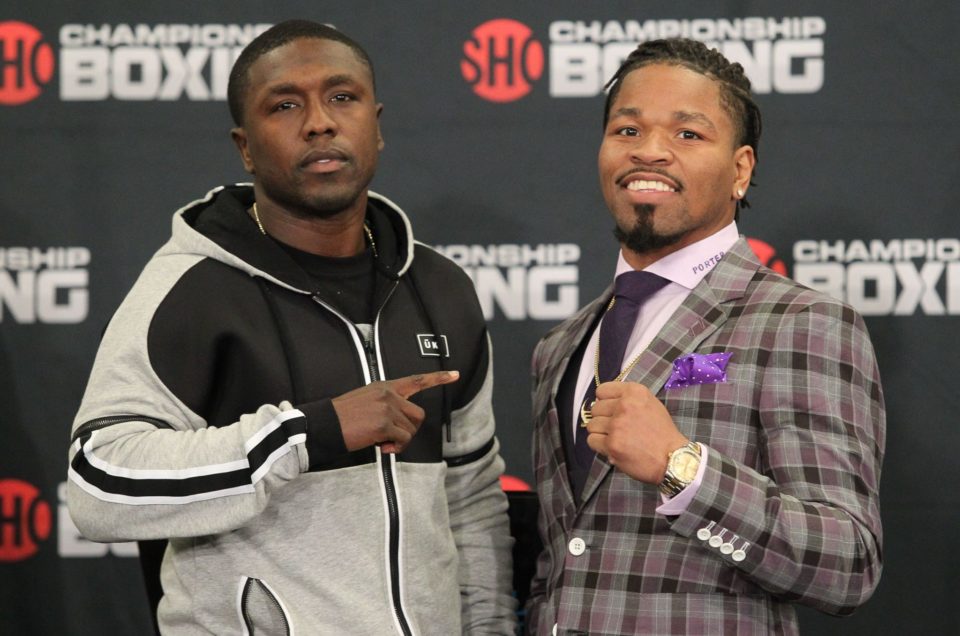 BROOKLYN (March 7, 2017) – Former world champions Andre Berto and Shawn Porter are set to collide in a welterweight world title eliminator on Saturday, April 22in the main event of SHOWTIME CHAMPIONSHIP BOXING, presented by Premier Boxing Champions, from Barclays Center, the home of BROOKLYN BOXING™.
Berto (31-4, 24 KOs) and Porter (26-2-1, 16 KOs) will battle in a 12-round eliminator for the WBC welterweight title live on SHOWTIME with televised coverage beginning at 9 p.m. ET/6 p.m. PT.  The winner will become the mandatory for the WBC crown picked up this past weekend by Keith Thurman, who unified the WBA and WBC titles with a victory over Danny Garcia on CBS at Barclays Center.
“It feels great to be getting back in the ring,” said Berto. “I love being back in New York. My team has been putting in work in the gym. I’m already dialed-in and focused. I’ve had the WBC belt before and I’m itching to get it back. I beat the man who had taken it away from me in my last fight and I’m going to take down anyone who gets in my way. I know Shawn is going to work hard for this one, but so will I. I’m looking forward to this one, you don’t want to miss it.”
“The only thing on my mind right now is the WBC title,” said Porter. “I made it a goal of mine when I turned pro to get that green belt, and now I feel like it’s about to happen. I’m not looking past Andre Berto, I respect him as a man and a fighter. We’re friends. But just like when I fought Keith Thurman, it’s all about the business and getting that title. I can’t wait to be in that ring on April 22 at Barclays Center.”
Tickets for the live event, which is promoted by DiBella Entertainment, start at $50 (not including applicable fees) and are on sale Wednesday, March 8 at 10 a.m. ET. Tickets can be purchased online by visiting www.ticketmaster.com, www.barclayscenter.com or by calling 1-800-745-3000. Tickets are also available at the American Express Box Office at Barclays Center. Group discounts are available by calling 844-BKLYN-GP.
“In a welterweight division that is filled with talent and marquis matchups, Berto vs. Porter is another elimination bout on the road to crowning the king of the division,” said Lou DiBella, President of DiBella Entertainment. “Berto and Porter are two established, offensive minded professionals who understand the significance of this showdown. I expect fireworks on April 22 when one of them stakes claim to an even bigger opportunity.”
“On March 4, Barclays Center hosted its biggest night of boxing ever and we are looking forward to continuing the momentum on April 22 with Berto vs. Porter,” said Brett Yormark, CEO of Brooklyn Sports & Entertainment. “We are excited to welcome Porter back to Brooklyn after his epic performance against Thurman in PBC’s 2016 Fight of the Year. BROOKLYN BOXING continues to be defined by 50-50 fights, dramatic moments, and a regular schedule of major boxing events.”
“April 22 is sure to be an action-packed fight between two of the best fighters in the welterweight division,” said Stephen Espinoza, Executive Vice President & General Manager, SHOWTIME Sports.  “We’re in the midst of a de facto ‘welterweight tournament’ – a series of matchups between the best fighters in one of boxing’s deepest divisions.  The winner of Berto vs. Porter will land right back in the mix with the top champions at welterweight as we move toward crowning an undisputed 147-pound champion.”
An exciting and accomplished fighter from Florida, Berto represented Haiti in the 2004 Olympics but now trains in Oakland with the renowned Virgil Hunter, who led him to a thrilling victory in April 2016 as Berto scored a fourth-round knockout of former champion Victor Ortiz in their rematch. Berto previously challenged retired legend Floyd Mayweather in September 2015 and has engaged in numerous Fight of the Year-worthy bouts including a 2012 war with Robert Guerrero and his first fight with Ortiz. He has twice held a welterweight title, first the WBC belt, which he successfully defended five times between 2008 and 2011, plus the IBF crown he picked up in 2011 with a victory over Jan Zaveck.
A physically-gifted fighter who had a strong amateur career, Porter returns to the ring at Barclays Center after a close loss to Keith Thurman in June 2016 that garnered unanimous Fight of the Year consideration. The 29-year-old had previously become a welterweight world champion at Barclays Center when he defeated Devon Alexander in 2013 in Brooklyn before defending the title with a dominant stoppage of Paulie Malignaggi. The Akron, Ohio-native now lives and trains in Las Vegas and he bounced back from a previous defeat to Kell Brook to knockout Erick Bone and earn a unanimous over four-division world champion Adrien Broner in 2015.
For more information visit www.SHO.com/Sports follow on Twitter @ShowtimeBoxing, @AndreBerto, @ShowtimeShawnP, @LouDiBella, @BarclaysCenter and @Swanson_Comm or become a fan on Facebook at www.Facebook.com/SHOBoxing, www.Facebook.com/DiBellaEntertainment, www.Facebook.com/barclayscenter. PBC is sponsored by Corona, La Cerveza Mas Fina.
Website Admin