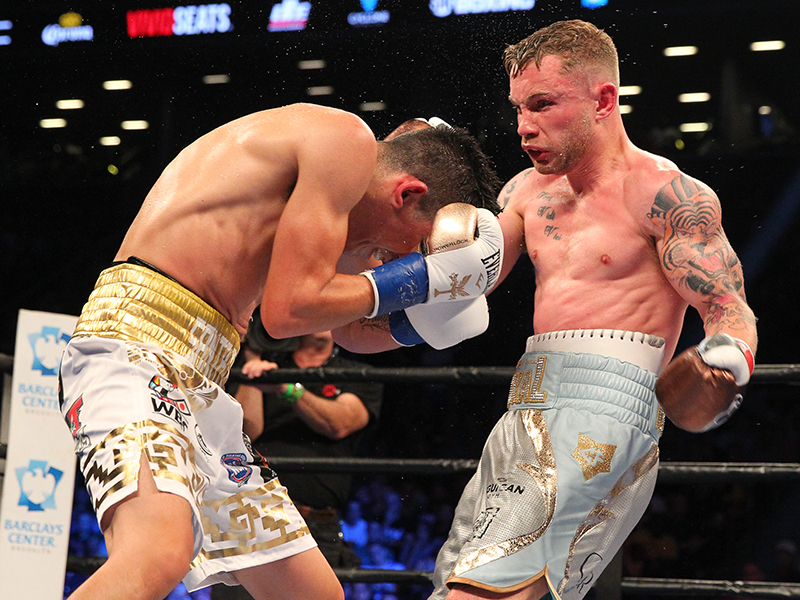 BROOKLYN (July 31, 2016) – In a possible “Fight of the Year” showdown between two undefeated fighters, Carl Frampton edged Leo Santa Cruz in a firefight to capture the WBA Featherweight World Championship in the main event of SHOWTIME CHAMPIONSHIP BOXING® Saturday in front of 9,062 fans at the electric Barclays Center in Brooklyn.

Santa Cruz’s hallmark has always been his high-octane output and power punching, but the three-division world champion was unable to utilize his reach advantage, and his activity was eliminated by Frampton’s tremendous counterpunching and power shots. While both fighters are top 10 in the world in jabs, a staggering 402 of their 497 combined landed punches were power shots.

While Santa Cruz landed almost equal the amount of power shots – 206 vs. 191 – the 46 percent that Frampton connected on appeared to land cleaner and inflict more damage. While Santa Cruz was the taller fighter, he lunged forward and fought short on the inside, allowing Frampton to minimize the reach and contest the battle toe-to-toe, where it suited him best.

“It’s a dream come true,” said Frampton. “I had the dream of winning a world title and I won it, but I never thought I’d win in two divisions. It was a tough fight, I wanted it to be a tough fight because I wanted a fight the people could remember. I respect him a lot. He was a true warrior.

“I had a good game plan. Shane was an unbelievable coach. He told me every time I came back into the corner that we could win this a lot easier. But I won it with my heart, not with my head and I got my hand raised.

In calling out the other champions at 126 pounds – including IBF champion Lee Selby and WBC champion Gary Russell Jr, who were both in attendance – Frampton said: “I want big, memorable fights.” Click HERE for Frampton’s full post fight interview.

Santa Cruz, who captured belts at 118, 122 and 126 pounds, disagreed with decision but agreed with Frampton’s wish for a rematch.

“It was a tough fight from the beginning,” Santa Cruz said. “We knew it was going to be a tough fight, but I thought it was close when I was in there throwing. Maybe the judges were hearing the crowd and thought that every little punch was scoring.

“He has a difficult style, but we know his style and will get him in the rematch. The crowd was cheering, and I think the judges saw that. Maybe, without that, we would have had a draw or maybe a decision.

“It’s hard to get your first loss, but now we’ll go back to the gym, we’ll get the rematch and we’ll win. And that loss will mean nothing. I want to have a rematch in Los Angeles, but I’ll go to Belfast too.”

Garcia (35-0, 29 KOs) showed no signs of ring rust as he stalked forward from the opening bell. The former 126 and 130-pound titlist and pound-for-pound mainstay floored Rojas (24-3, 14 KOs) midway through the third with a right-left combo, sending the Dominican to the canvas for just the second time in his career. Rojas beat the count, but a monster right sent him falling face-forward less than one minute later for the second knockdown of the round. Again, the durable Rojas continued to come forward as Garcia teed-off.

Rojas was tagged again midway through the fifth with a huge right, falling to the canvas for the third time in fight. Now bleeding from his nose, Rojas was knocked down again just seconds later by a brutal right uppercut from Garcia. Again, Rojas beat the count, but looked defeated and referee Eddie Claudio stopped the fight.

“The two-and-a-half-year layoff sparked a fire in me and motivated me to do the best that I could,” said Garcia, who landed 50 percent of his power shots. “Elio is a tough guy and a former world champion. He didn’t come for a paycheck; he came to win.

“Elio took advantage of the opportunity. But we trained for a great performance like this and I was thrilled to get the job done. It felt great to be here with a supportive crowd behind me. I’m looking forward to getting back in there and winning another world title.”

Despite the four knockdowns, Rojas disagreed with the stoppage and wanted to continue fighting.

“I was able to get off the canvas because I trained so hard,” Rojas said. “Mikey is just stronger. I’m a natural 126-pounder fighting above my weight. It was a great matchup and Mikey is a great fighter. I have no doubt that he is going to take over the division.

“I was very upset when the fight was stopped. I wanted to keep going because I have a champion’s heart and I never want to quit.”

Once-beaten 154-pound contender Tony Harrison secured the IBF’s No. 2 position with a ninth round TKO (1:18) of Sergey Rabchenko in the opening bout of the SHOWTIME CHAMPIONSHIP BOXING telecast.

Harrison (24-1, 20 KOs) is now ranked No. 2 behind IBF Junior Middleweight World Champion Jermall Charlo and No. 1 mandatory challenger Julian Williams, who have agreed to fight later this year.

Harrison set up the distance with his jab, controlled the pace and outpunched Rabchenko (27-2, 20 KOs) by a nearly 2-1 margin. He was breaking Rabchenko down with a steady diet of power shots and well-timed jabs when he floored the Belarus native with a sharp right hand one minute into the ninth. Rabchenko got up, but looked defeated and unsteady on his feet, forcing referee Arthur Mercante to halt the contest.

Harrison landed 11 of 40 jabs per round on top of an impressive 46 percent of his power shots.

“This is definitely my biggest win ever,” Harrison said. “I was luring him to sleep. My trainer told me that I would have the right hand behind the jab and that’s what happened. I’m a finisher. I had him hurt and I said to the ref ‘you better not let him go.’ I knew I had him beat.

“A focused Tony Harrison can beat anybody at 154-pounds. Now it’s on Jermall Charlo and Julian Williams. I’m in the catbird seat.”

Rabcheko threw an average of only 31 punches per round, connecting just seven per round.
“I didn’t throw enough punches,” Rabchenko admitted. “I kept relying on my defense and didn’t attack enough. I was looking for one shot and it was difficult to do it against Tony Harrison with one punch. The ref did a great job with the stoppage. My health is first and foremost. The health of any fighter is the most important thing. I knew I couldn’t continue.”

Former two-division world champion and SHOWTIME analyst Paulie Malignaggi won a 10-round unanimous decision over fellow Brooklynite Gabriel Bracero in the “Battle for Brooklyn.” The welterweight bout was scored 96-94 and 98-92 twice.

“The Magic Man” stuck to his usual game plan, jabbing at range and utilizing his reach advantage against the naturally smaller Bracero, who was unable to get inside against the master technician. Malinaggi (36-7, 7 KOs) dictated the pace and was the more effective fighter, landing 35 percent of his total punches compared to 29 for Bracero (24-3, 5 KOs). Malignaggi dominated with the jab, landing 11 per round, which is double the welterweight average.

“I knew Bracero was a counter-puncher like myself. I was just trying to be the sharper counter-puncher. We both try to set traps and I just wanted to make him earn any points that he got. At the same time, I felt like I had to earn my points. I dictated the fight with pot shots and stepping over.

“I didn’t want to get desperate. I wanted to force him to get desperate from being behind on the scorecards. I think I did a good job of that. As the fight went on, I just used my movement and feints to stay in control.

“The plan was to keep it simple – if he didn’t adjust to any traps, then I was going to keep using them. I kept it as simple as I could against a guy who if you complicate things, he will catch you. He’s a counter-puncher who can make you pay. ”

Later in the evening, Malignaggi returned to his ringside position as commentator for the SHOWTIME CHAMPIONSHIP BOXING telecast.

Fighting on his 26th birthday, Farmer (22-4-1, 5 KOs) was the more effective fighter from the start. He was able to fight on the inside against the naturally bigger Redkach (19-2-1, 15 KOs), who’s only defeat had come in a 2015 title eliminator against current WBC Lightweight World Champion Dejan Zlaticanin.

Farmer, who’s winning streak dates back to a 2012 loss to current 130-pound titlist Jose Pedraza, landed 42 percent of his power punches compared to just 19 percent for Redkach, who landed just 16 percent of his total punches.

“I’m proud of my performance tonight,” Farmer said. “I was very confident that I would be victorious as long as I executed the game plan and that’s what I did. I want a world title. I’m going to go back to 130-pounds and I feel like I’m ready for a title shot. If I have to fight an eliminator I will. I won’t back down from any challenge.

“I beat him down. I was the more experienced fighter and I came in with more rounds and with better opponents on my resume.”

Both fighters were deducted a point, Farmer in the eighth for a low blow and Redkach in the ninth for an intentional head butt.

The SHOWTIME EXTREME telecast also featured highlights of WBO Featherweight World Champion Amanda Serrano as she dropped Colombia’s Calixta Silgado twice on her way to a first round stoppage.

Serrano (29-1-1, 22 KOs) defended her title in the first women’s world championship bout at Barclays Center and made quick work of the challenger. Serrano swarmed Silgado (14-7-3, 9 KOs) from the start with strong combinations and powerful hooks. Silgado was able to recover from the first knockdown but was quickly smothered by Serrano, who sent her to the canvas and forced referee Benjy Esteves to halt the bout 1:41 into round one.

“I just wanted to get in there and show the fans and everybody out there that women can fight,” said Serrano. “We have talent as well. The sky is the limit. I want more belts. I’m going to drop down to 122-pounds and become a four-division world champion like Miguel Cotto.”

Lee Selby: “Look, it isn’t my nature to call anyone out. But I know that these guys are looking to fight me, so I will accept the offer with open hands. In the build up to this fight, Leo Santa Cruz says he’ll fight me too. So, I accept both challenges.”

Gary Russell Jr.: “I want all of the above. I want to address something that that Lee Selby said. He said that no one knows who Gary Russell is. Well, everyone knows who the WBC featherweight champ is, and it’s Mr. Gary Russell. We are both men and I expect you to conduct yourself as a man. Don’t use this as an out to try to avoid fighting me.”

Lee Selby: “I can clarify. Back home, Carl Frampton is a huge name. A fight between he and I would be bigger, that’s what I was saying.”

Gary Russell Jr.: “Look, I like the IBF belt. I want to add it to my collection. And as for Leo Santa Cruz, he wants to avenge the loss I gave him in amateurs. So, me and Leo, we can make it happen.”

The evet was presented by Premier Boxing Champions and promoted by DiBella Entertainment in association with Cyclone Promotions.