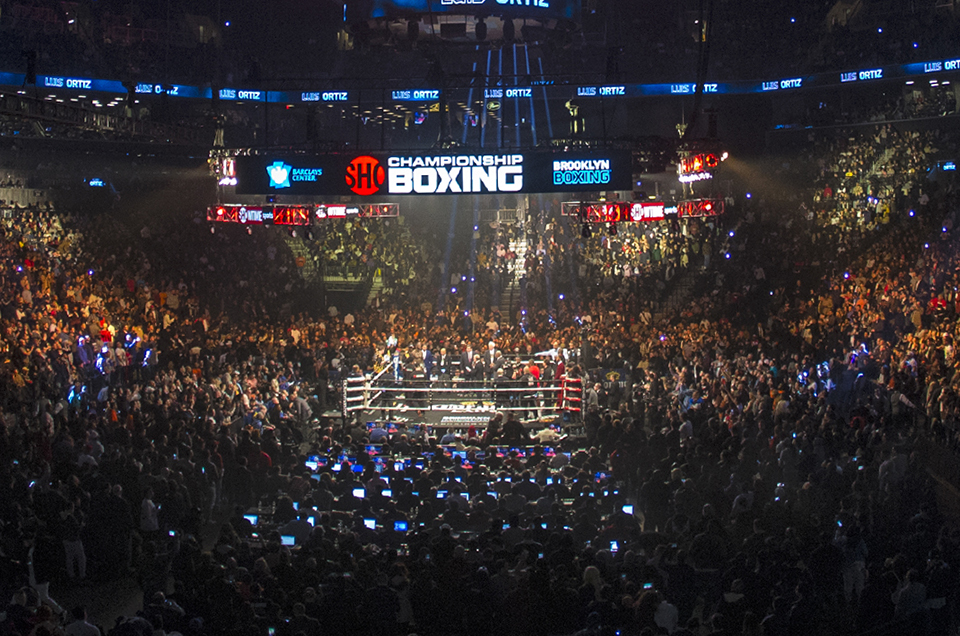 Brooklyn, NY (March 15, 2018) DiBella Entertainment is coming off highly successful back-to-back weekends, from promoting the heavyweight championship of the world between Deontay Wilder and Luis Ortiz, to getting top-rated contenders Regis Prograis, Ivan Baranchyk, and Richard Commey in line for world title shots, as well as seeing several prospects continue to rise up the rankings with impressive victories.

“It has been a tremendous past two weekends for DiBella Entertainment,” said Lou DiBella, President of DiBella Entertainment. “The boxing world witnessed Deontay Wilder show the heart of a true champion to secure his signature victory at Barclays Center in Brooklyn. Women’s boxing crowned a new champion in Alicia Napoleon and saw the emergence of a new exciting attraction in the New York area. At the Deadwood Mountain Grand, in South Dakota, super lightweight Regis Prograis won a share of what will be his 140-pound WBC green belt and established himself as one of the sport’s rising superstars. With his new trainer Pedro Diaz, Ivan Baranchyk fought the best fight of his career and became the mandatory challenger for Mikey Garcia. In San Antonio, lightweight Richard Commey gave himself a great birthday present with a sensational knockout to earn the mandatory versus Robert Easter.”

On Saturday, March 3, DiBella Entertainment promoted the WBC Heavyweight World Championship between champion Deontay Wilder (40-0, 39 KOs) and previously undefeated challenger Luis Ortiz (28-1, 24 KOs). In the highly anticipated bout before a crowd of 14,069–the second largest boxing crowd at Barclays Center–two of the best heavyweights in the world engaged in a phenomenal battle with Wilder overcoming serious adversity to notch his seventh WBC title defense by stopping the hard-hitting Cuban in the 10th round.

Alicia Napoleon (9-1, 5 KOs), of Lindenhurst, Long Island, NY, was featured on the Wilder-Ortiz undercard and won the WBA Women’s Super Middleweight World Title, displaying her championship class by defeating Femke Hermans (6-1, 3 KOs) via 10-round unanimous decision. After winning 11 amateur titles, including two New York Golden Gloves titles and a National Golden Gloves title, Napoleon turned pro in August 2014. Having won her world title in front of a large cheering section at Barclays Center, it is clear that Napoleon has established herself as a new female boxing star attraction in New York.

DiBella then traveled to the Deadwood Mountain Grand in Deadwood, South Dakota, for a sensational six-bout card on Friday, March 9, that had the capacity crowd on their feet throughout. Hitting all three local TV stations and four different radio outlets in nearby Rapid City before Thursday’s weigh-in, DiBella became an instant celebrity in the area and was surrounded by well-wishing boxing fans on the night of the event.

Headlining the “SHOWTIME Boxing: Special Edition” telecast, Regis “Rougarou” Prograis (21-0, 18 KOs) put himself on the world stage with a stunning second-round stoppage of former unified champion Julius Indongo (22-2-1, 11 KOs) to capture the interim WBC Super Lightweight Title. The contest made history as it was the first world title fight ever staged in South Dakota. As the interim WBC titleholder at 140 pounds, Prograis will meet the winner of Saturday’s clash in New York between Jose Ramirez and Amir Imam for the WBC belt. Prograis will be watching intently from ringside at Madison Square Garden, eager to take on the winner and become the first world champion from New Orleans since Willie Pastrano, more than 50 years ago.

With his new trainer, Pedro Diaz, Belarus-born, Brooklyn-based junior welterweight Ivan “The Beast” Baranchyk (17-0, 11 KOs) participated in the evening’s co-featured bout, enamoring fans in attendance with his most impressive performance yet. Known for his all-action style and last seen on SHOWTIME in a war against Abel Ramos, in one of the best fights in the history of the “ShoBox: The New Generation” series, Baranchyk dismantled the game former world title challenger Petr Petrov (38-6-2, 19 KOs) over seven rounds, dropping him three times en route to a stoppage victory. It was his fifth appearance on SHOWTIME. The win earned Baranchyk, co-promoted by DiBella Entertainment, Fight Promotions Inc., and Holden Productions, and managed by David McWater’s Split-T Management, the #2 ranking at 140 pounds by the IBF, and put him in line for a shot at newly-crowned champion Mikey Garcia.

New Zealand heavyweight prospect Junior Fa (14-0, 8 KOs) opened up the SHOWTIME telecast, staying unbeaten with an eight-round decision win versus Craig Lewis (14-2-1, 8 KOs). It was the third fight Stateside and second appearance on SHOWTIME for Fa, who holds two amateur wins over WBO Heavyweight Champion Joseph Parker, as he works his way up the rankings and into title contention.

Once ranked the #2 featherweight in the world, Hartford, Connecticut’s Matt “Sharp Shooter” Remillard (27-1, 15 KOs) earned the fourth victory of his comeback against Jesus Valdez (22-4-1, 11 KOs) to seize the WBC USNBC super featherweight title. Trained by Connecticut Boxing Hall of Famer Paul Cichon, Remilard resumed his career in April 2017 following a six-year ring absence. Prior to his lone defeat to Mikey Garcia in March 2011, Remillard had accumulated the WBC USNBC, NABF and NABO titles at 126 pounds. He is now ready to prove himself against the 130-pound division’s elite and top-rated fighters.

Cleveland’s Charles Conwell (7-0, 5 KOs), a 2016 US Olympian and rising junior middleweight star, has kept a busy and impressive start to his career since turning pro last April. On the Prograis-Indongo undercard, the 20-year-old earned a six-round unanimous decision against the experienced Juan Jesus Rivera (28-20, 18 KOs). It was last November when Conwell made his television debut on SHOWTIME’s “ShoBox” series. A highly accomplished amateur, having amassed a 132-14 record, Conwell is co-promoted by DiBella Entertainment and Holden Productions, and is managed by David McWater’s Split-T Management.

The following night, on Saturday, March 10, Ghanaian Richard Commey (26-2, 23 KOs), trained by Andre Rozier and Gary Stark Sr. in Brooklyn, NY, handed Alejandro Luna (22-1, 15 KOs) his first defeat with a blistering sixth-round knockout, in an IBF lightweight elimination bout from the Freeman Coliseum, in San Antonio, TX. He is now the mandatory challenger to champion Robert Easter, setting up a rematch of what was a hotly-contested battle in September 2016.