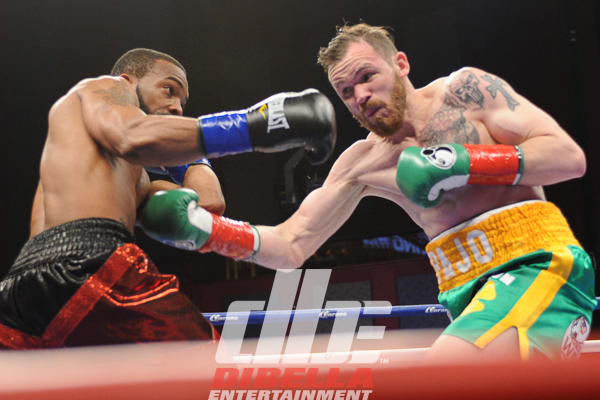 A relentless Russell brought the main event to a quick halt by registering three knockdowns in the second round, the last of which forced referee Danny Schiavone to end the contest at 1:33.  From the first bell, the Washington, D.C. native came out swinging with his trademark hand speed and dangerous power.  Russell, a southpaw, successfully broke down—and knocked out—Hyland with multiple vicious right hooks.

“We stuck to the game plan. We stayed sharp,” said Russell Jr., who improves his record to 27 wins, one loss, 15 knockouts.

“I’m ready to fight anyone in the division – Santa Cruz, Lee Selby.  We are ready. But what I really want is [Vasyl] Lomachenko.  I don’t care if he moves up to 147 pounds.  I will go anywhere to get that fight,” Russell said.

“There aren’t many fighters who you instantly know are special,” said SHOWTIME Sports expert analyst Steve Farhood. “The combination of Gary Russell’s hand speed and accuracy instantly shows us that he’s special. That was plainly evident tonight and at times his hand speed was frightening.”

Pedraza (22-0, 12 KOs) remained disciplined and came out victorious during his second IBF 130-pound world title defense. A combination of timing, hand speed and good defense allowed the Puerto Rican native to dominate the 12-round championship fight.

“This definitely was a tough fight but the training really came to advantage in this fight,” Pedraza told SHOWTIME Sports reporter Jim Gray. “I knew he was a tough fighter so I was always aware.”

“I had better focus tonight. I had a better training camp,” said Pedraza, referring to his controversial split decision win over Edner Cherry two fights ago.  “I knew that Stephen Smith was a great fighter and even after the knockdown, we were very cautious not to rush in.”

“Pedraza won tonight with different weapons. Mostly right hands to the head,” said Farhood. “I had the fight even after eight rounds and once Pedraza dropped Smith in the ninth, he gained momentum that he never lost and he pulled away. It was an impressive performance but also an important one because it erased a lot of the negative criticism Pedraza received in his controversial win over Edner Cherry.”

Pedraza was the more accurate fighter, landing 50 percent of his power punches over the 12-round bout. The Sniper was able to pick his spots and pocket rounds once he figured out the distance.  Smith had his moments, but wasn’t active enough.

Russell Jr. vs. Hyland, was a 12-round bout for Russell’s Jr.’s WBC Featherweight Title taking place on Saturday, Apr. 16 at the Fox Theatre at Foxwoods Resort Casino in Mashantucket, CT, is promoted by DiBella Entertainment. In the co-feature, Jose Pedraza and Stephen Smith will meet in a junior lightweight world title bout for the IBF belt. The SHOWTIME CHAMPIONSHIP BOXING doubleheader will air live on SHOWTIME (11 p.m. ET/8 p.m. PT) and will be available in Spanish via Secondary Audio Programming (SAP).