GOLOVKIN HAS THE FEAR FACTOR AGAINST DEREVYANCHENKO 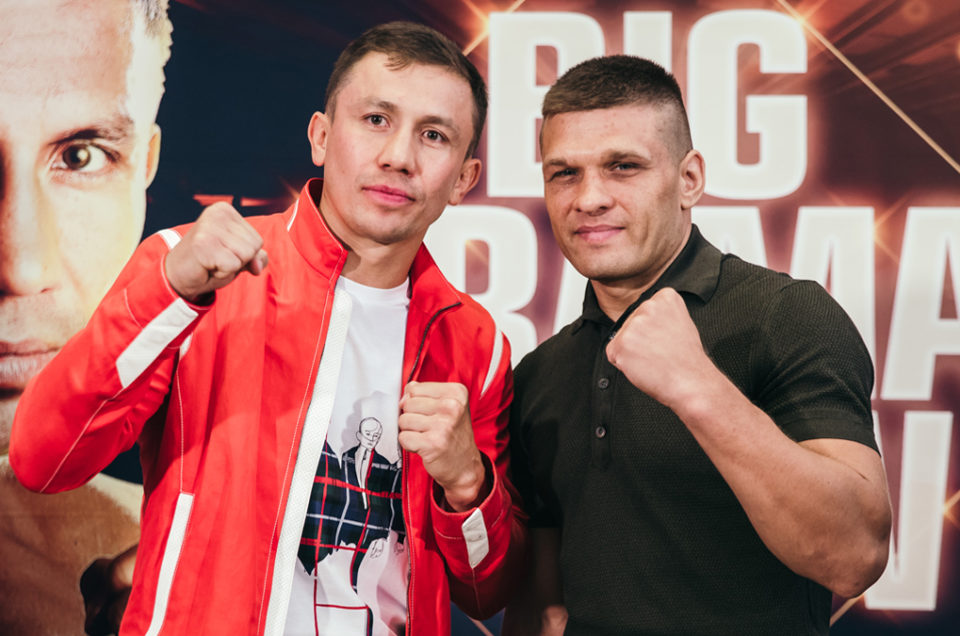 New York, NY (August 23, 2019) Gennadiy “GGG” Golovkin believes his clash with Sergiy Derevyanchenko will be a classic when they meet for the vacant IBF World Middleweight title on Saturday October 5 at Madison Square Garden in New York, live on DAZN.

Golovkin (39-1-1 35 KOs) and Derevyanchenko (13-1 10 KOs) met at a press conference at the Mecca of Boxing yesterday and both men stated their excitement for what promises to be a thrill a minute battle for the belt that Golovkin used to hold, and that Derevyanchenko has challenged for.Former unified king Golovkin is gunning to regain the crown he held for three years as the Kazakh star targets returning to World champion status and meetings with the other champions at 160lbs.Derevyanchenko has plans to derail that journey though and came close to landing the IBF strap himself in October at the Hulu Theater at MSG, being edged out on a split decision against Golovkin’s old foe Daniel Jacobs.

“I’m so excited,” said Golovkin. “First of all, I’m happy to be back home, my second home. Thank you to my family at Madison Square Garden for always supporting me. Of course, I’m very excited right now. Right now, I work with the best people from boxing.

“I have the best opponent, Sergiy. I’ve known him for a long time and he’s a very good fighter. This is a real fight. I’m a little bit scared because he’s good. I know his team is very strong. And I’m scared because he looks good. He looks strong. He feels it’s his time right now. Maybe – this is boxing, nobody knows. So if you want to watch a real show, a real fight, come to MSG on October 5 or watch live on DAZN.”

“I’m really excited and happy to be at Madison Square Garden,” said Derevyanchenko. “Thank you to my team, and I want to give thanks to Gennadiy Golovkin for the opportunity as well. I know exactly who I’m getting in the ring with. He’s the former Middleweight champion of the world, one of the best fighters in the world, but his time is coming to an end and I want to be the one that makes that time come to an end.”

MORE QUOTES FROM THE PRESS CONFERENCE

Eddie Hearn, President, Matchroom Boxing USA
“Gennadiy is for me the most entertaining, most dangerous fighter in world boxing. Is there a fighter in boxing that gives more value for money than Gennadiy Golobkin? I’m not sure, I haven’t found him yet.”

“He may look like a very calm individual, we know he’s a lovely man, but what a fearsome fighter. For me, it’s a pleasure to be a part of Team GGG now, a man that we’ve admired from a distance for a long time, become one of the biggest names in the sport of boxing. As an individual, he carries himself with so much class. He’s a role model for the next generation of fighters coming through. He has integrity, he has honor. And when you look at him in the eyes, it tells you one thing – I love to fight, and I will fight any man.

“There’s been a lot of speculation recently about who he’s going to fight. Is it going to be Canelo? The thing that’s most important in a fighter’s career is to take control of your career. Have a strategy, have a plan, don’t worry about other people. And right now, we have a plan with Gennadiy’s career that’s extremely exciting to dominate the division and it starts on October 5 at the Mecca of boxing.”

“What a 10 months it’s been for DAZN. We’re 10 months in, that’s it, and we have by far the strongest stable of fighters in America. It’s not even close.”

Lou DiBella, President of DiBella Entertainment
“We knew that Gennadiy knew Sergiy, they’ve known each other for years, when they were both amateurs. Right now, Gennadiy’s moving on in his life and fighting the best middleweight in the world available to him, and I believe that’s what Sergiy is. I’m going to tell you, this is one of the three hardest fights GGG has ever walked into the ring for, one of the three best opponents GGG has ever faced as a pro. I think this is a great fight for fight fans and I promise you that between GGG Promotions and Eddie and myself, the rest of the card is going to live up to the main event and we’re going to have a night of boxing that’s one of the best on DAZN’s schedule for the rest of the year.”

Joseph Markowski, DAZN EVP, North America
“It’s been a busy summer for DAZN to build out our year-end, one that is without question the most impressive schedule in fight sports. This fight on October 5th, the second of Gennadiy’s long term deal with us, will be the start of what I see as the season of fight sports. A long-term schedule of high-quality fights, best fighters against best fighters, delivering tremendous value for fight fans.”It’s a tremendous fight itself, and it’s only a part of our backend year end schedule that’s going to be great for fight fans and sports fans in general.”

Keith Connolly, Manager of Sergiy Derevyanchenko
“Wow what an amazing opportunity for Sergiy. 10 months ago, we were in this building where he fought Danny Jacobs, and he lost a very close decision. He and his wife were very heartbroken. I made them one promise that night, that I would do everything in my power to get them another opportunity. 10 months later, because of a lot of maneuvering, he’s back in this same position he was 10 months ago,. He’s got a second opportunity to be under the bright lights and really change his life. I think he’s got a really good chance. I’m a huge fan of GGG, but his will be the second time in my life that I’m rooting against him. Sergiy’s got a real chance. He might only be 13-1 as a pro but he has over 400 amateur fights and won 390 of them. This is definitely an entertaining fight.

Johnathon Banks, Trainer of Gennadiy Golovkin
“It’s an honor to go against this guy [Rozier]. I’ve been saying that since I was 15 in the amateurs. I have nothing but the utmost respect for this guy. That’s to me, that’s one of the things that’s going to make this fight one of the biggest fights of GGG’s career. I know the pedigree that Rozier has and good fighters always surround himself with him because they know he always takes fighters to another level. This fight will be a good fight. Tune in on DAZN, come to the Garden, this is a fight you don’t want to miss. Both guys are fighting for a chance to be a world champion. One is a repeat, one is a first-timer, but it doesn’t matter, the playing field is completely even, completely level. Both guys are going to put everyone on the line for this fight to win this world title.”

Andre Rozier, trainer of Sergiy Derevyanchenko
“He cannot win this time. He cannot be victorious. The Technician is ready, he’s willing, he’s able. He’s putting his best foot forward. Our team is no longer fragmented. The squad is ready and we plan to be the middleweight champion of the world on October 5. Sergiy is a quiet man but you have to watch the quiet ones – they’re the most dangerous.”