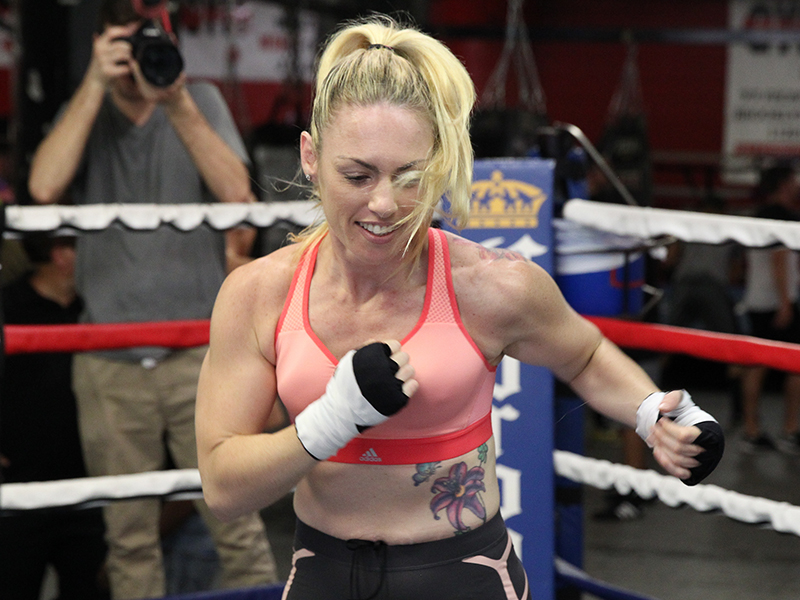 New York, NY (11/10/15) – Earlier this summer, Visa announced its partnership with sports apparel company Under Armour for its online payment program and a new ad campaign, “Break It.” Commercials for the partnership have now started to roll out and none other than DiBella Entertainment’s “First Lady,” undefeated Brooklyn female super bantamweight Heather “The Heat” Hardy (14-0, 3KO’s) is being featured in the campaign ads.
Hardy, who returns to the ring on Saturday, December 5th, at Barclays Center in Brooklyn, on the undercard of the eagerly anticipated world middleweight championship showdown between Daniel Jacobs and Peter Quillin, is in talks with the sportswear company to officially become part of the Under Armour Women’s team that includes such superstar athletes and female figures as Gisele Bundchen, Lindsey Vonn, Misty Copeland, Brianna Cope and Kelley O’Hara.
“It is an honor to be included in the “Break It” campaign alongside the likes of Billie Jean King and so many other great and inspirational female athletes,” said Hardy. “Like her, I am still a part of this fight, working to break the barrier that women in my sport fight both inside and outside of the ring, day after day. Even today, as an undefeated 14-0 champion, ranked #1 in the world, I am still fighting to get the recognition that I so long for and deserve. I will continue to fight this fight until I see my dreams come true and challenge for a world title in a nationally televised appearance on a major TV network.”
Hardy is quickly closing in on her first world title opportunity, but first she must take care of business against a familiar foe, Noemi Bosques (10-3-2, 2KO’s) when the undefeated female star steps into the ring on December 5, in what will be her fourth consecutive performance at Barclays Center. Hardy and Bosques fought at the Brooklyn arena in May, with Hardy winning an entertaining eight-round split decision. Hardy felt there was no question that she won the fight, and is out to prove there is no doubt who is the better fighter when the two meet again on the 5th.
“I hate doing rematches because it’s so redundant and I already beat you. It was a split decision though, so in her mind she feels like she can come back and beat me. I didn’t want to deny her that, because we put on a great show for the fans. People at the fight knew I won the fight and that it was a clear decisive win, but when people see ‘split decision’ there are always questions that arise because she is such a good legitimate fighter. I’m giving her another chance.”
Below are the mission statements for both Under Armour Women and the “Break It” campaign. A link to the “Break It” commercial is below.
Under Armour Women
IT DOESN’T MATTER WHAT OTHERS THINK.
IT’S WHAT YOU BELIEVE.
We’re not a campaign; not a season or snapshot.
Our story isn’t told through a press release or social post.
It’s dripping down our backs-each drop a declaration to prove
that the space between woman and athlete is no space at all.
We’re UA Women. And we WILL what we want.
Break It
“Break It” is no ordinary campaign. It will be an epic, high-octane tribute to female athletes over the past 80 years who broke expectations to achieve excellence. Created in partnership with Visa and Under Armour, our message aims to inspire the next generation of female athletes.
Commercial Link
http://youtu.be/koTj6AOAGdc
Barclays Center’s BROOKLYN BOXING™ programming platform is presented by AARP. For more information visit www.SHO.com/Sports follow on Twitter @SHOSports, @DanielJacobsTKO, @KidChocolate, @LouDiBella, @BarclaysCenter and @Swanson_Comm or become a fan on Facebook at www.Facebook.com/SHOSports, www.Facebook.com/DiBellaEntertainment and www.Facebook.com/barclayscenter.
CONTACTS:
Swanson Communications: (202) 783-5500
DiBella Entertainment: (212) 947-2577
Chris DeBlasio, Showtime Networks Inc.: (212) 708-1633
Matt Donovan, Showtime Networks Inc.: (212) 708-1663
Flo Jocou, Showtime Networks Inc.: (212) 708-7319
John Beyrooty/Jared Kaufer, BZA/SHOWTIME: (562) 233-7477/(818) 621-1111
Barry Baum, Barclays Center: (718) 942-9533
Mandy Gutmann, Barclays Center: (718) 942-9587
Credentials: www.magnamedia.com
Website Admin