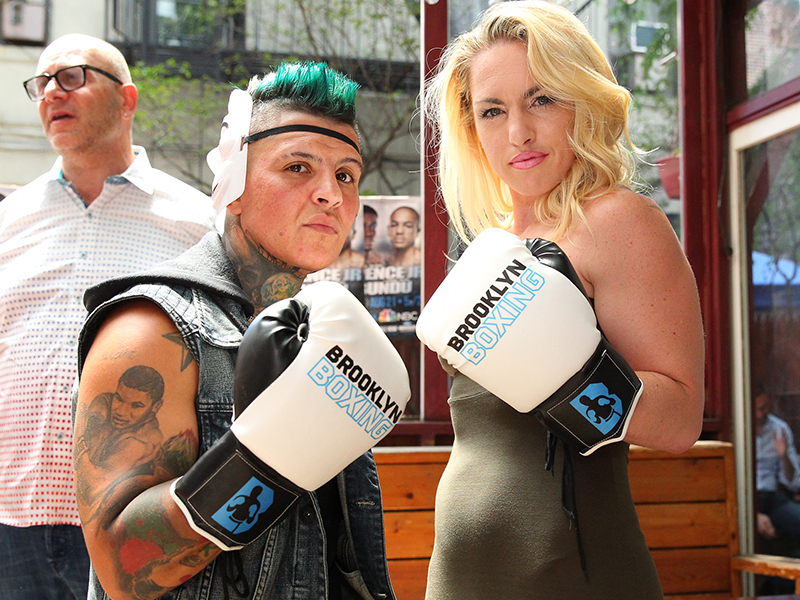 New York, NY (8/12/16) – On Sunday, August 21, undefeated rising star Errol “The Truth” Spence Jr. (20-0, 17 KOs) is set to take on once-beaten contender Leonard “The Lion” Bundu (33-1-2, 12 KOs) in a 12-round welterweight world title eliminator that headlines Premier Boxing Champions (PBC) on NBC Sunday, August 21 from Ford Amphitheater at Coney Island Boardwalk in Brooklyn.
The action on NBC begins at 5 p.m. ET/2 p.m. PT following coverage of the Olympic Men’s Basketball Gold Medal game. While much of the focus and buildup to the event has been on the 2012 US Olympian Spence Jr., there is another fight on the card that has the boxing world buzzing with anticipation and that is the WBC International Women’s featherweight championship between Brooklyn’s Heather “The Heat” Hardy and her longtime rival Shelly “Shelito’s Way” Vincent, of Providence, RI.
If you are a fan of women’s boxing, there is no bigger fight that can be made in the sport right now. Hardy (17-0) and Vincent (18-0), both world-rated and undefeated, have been baiting and verbally accosting each other for years. There is a legitimate hatred between the two that will surely not subside after they share the ring on August 21st.
Vincent began appearing at Hardy’s fights at Roseland Ballroom, which has since closed down, calling out the former amateur national and New York Golden Gloves champion, dating back to 2012, and the two have been combative ever since.
A longtime supporter of women’s boxing, and promoter of Hardy since her pro debut, Lou DiBella knew how big this fight could be not just for women’s boxing but for boxing in general. Hardy is one of the biggest draws in all of New York, while Vincent has an extensive fan base throughout the New England area. So when DiBella signed Vincent at the beginning of this year, potential for the bout to finally happen picked up major steam.

The two nearly came to blows at Vincent’s DBE debut in January at BB King Blues Club and Grill in NYC, and would have agreed to fight anywhere, any time, if it were up to them. DiBella, though, knew they deserved more. Their fight deserved the proper platform, and the proper stage to showcase this long talked about, and eagerly anticipated fight.
“This fight needed to be on TV, given everything these girls have been through, for how hard they have worked to get to this point, and for how long the buildup to this fight has been. My job as their promoter was to make sure that the fight was televised,” said DiBella.
Enter PBC and NBCSN. Since its inception in March of last year, Premier Boxing Champions has brought boxing back to the forefront, accessible to mainstream sports fans, providing coverage of some of boxing’s biggest fights, televised live, for free and in primetime on major cable networks CBS, NBC, and FOX. Now, on August 21st, the ladies will finally have their shot. The Hardy-Vincent bout, which will serve as the co-main event on the NBCSN telecast, will air in primetime starting at 9 p.m. ET.
“I was given the opportunity by PBC to put this bout on NBCSN and I think that’s a big thing for women’s boxing to have a fight like this on television. Hopefully, this is going to open the door for more females to have these types of opportunities because they deserve it. They deserve to have the opportunity and the ability to continue to grow in a sport that, for centuries, has been dominated by males. This is a major step in that direction,” continued DiBella.
DiBella held a media luncheon for Hardy and Vincent last week to officially announce the bout, and while the two women were respectful and civil for the most part, there was a definite tension in the air. Now, with just a little over a week to go until fight night, both Hardy and Vincent are more than ready to put on a show.
“This fight is a long time coming,” said Hardy. “Shelly has been very vocal about how I’m not good enough, I’m not strong enough, and I’m not smart enough. I stayed quiet though, minding my own business and going about my career, because my mother taught me never to wrestle with a pig. She said that if you wrestle with a pig, you’ll both get dirty and that’s what the pig wants. Come fight night, she will be forced to eat every word she has ever said about me. It’ll just be me and her alone in that ring, and she has nowhere to run, no mask to hide behind and nothing more to say. We will see who the real champion is on August 21.“
Hardy continued, “I am very thankful to PBC and especially to Lou for everything that he’s done to make this fight happen. I know it wasn’t easy and he put up a hell of a fight to get this bout televised. In 2016, it’s not acceptable for doors to still be closed to women. It’s my responsibility, as the parent of a young girl, to fight for her and for every little girl banging away at a punching bag in the boxing gym with dreams of fighting on the biggest stages throughout the world. We deserve the chance to showcase ourselves, and on August 21, we finally have our moment.”
“I have wanted this fight for so long, it’s all I have thought about. I wanted this as bad as I have wanted to bring my mother back to life,” said Vincent. “The hype, the attitude, all the talk is almost over. This is going to be a great fight. Everyone says Lou signed me to use me as an opponent for her, but I know that’s not the case. She wants to be called ‘The Heat’, well I am telling you right now, she’s about to walk through hell. I know how hard that is, because I have been there before in life. I have been fighting my entire life. When I get in the ring, that’s fun for me. Heather has improved in the last couple of years because she has been training for me. She knows that she has to be her absolute best to beat me, and I know that she will be. Unfortunately for her, it still won’t matter. I want to thank PBC and NBCSN and of course Lou for giving us a chance and an opportunity that we have been fighting to achieve for years. This fight is huge for women’s boxing as a whole. This is an opportunity of hope. Hope for all those young girls out there in the world training day in and day out, dreaming of making it big. This fight is history, and I am happy to be a part of it.”
Tickets for the live event, which is promoted by DiBella Entertainment and presented by BROOKLYN BOXING™, start at $35. Tickets can be purchased online by visitingwww.ticketmaster.com and fordamphitheaterconeyisland.com.
PBC on NBC is sponsored by Corona, La Cerveza Mas Fina. For more information, visit www.premierboxingchampions.com and www.nbcsports.com/boxing, follow on Twitter @PremierBoxing, @ErrolSpenceJr, @HeatherHardyBox, @ShelitosWay, @LouDiBella, @NBCSports, @BarclaysCenter and @Swanson_Comm or become a fan on Facebook at www.Facebook.com/PremierBoxingChampions, www.facebook.com/NBCSports, www.Facebook.com/DiBellaEntertainment and www.Facebook.com/barclayscenter. Highlights available at www.youtube.com/premierboxingchampions.
Photo credit: DiBella Entertainment/Ed Diller
CONTACTS:
Swanson Communications: (202) 783-5500
Tim Smith, Premier Boxing Champions: timothy@haymonboxing.com
DiBella Entertainment: (212) 947-2577
Barry Baum, Brooklyn Sports & Entertainment: (718) 942-9533
Credentials: credentials@dbe1.com
Website Admin