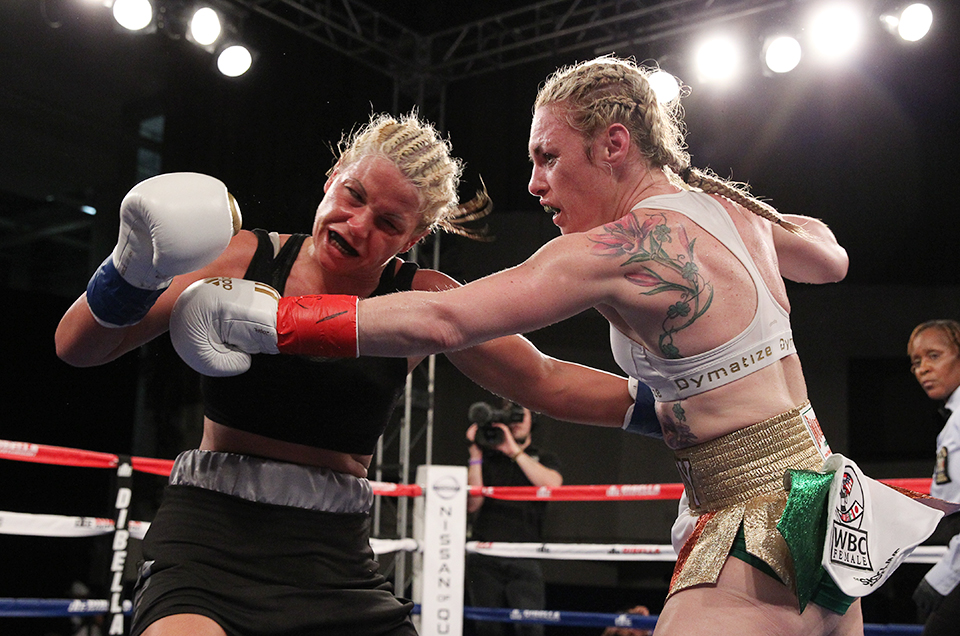 Brooklyn’s Heather “The Heat” Hardy headlined the card facing Hungarian Edina Kiss in an eight-round featherweight rematch. Before becoming a staple at Barclays Center (where she has fought seven of her last nine bouts), Hardy, now a two-division WBC International champion, was regularly featured on Broadway Boxing, making her pro debut on the series in August 2012. 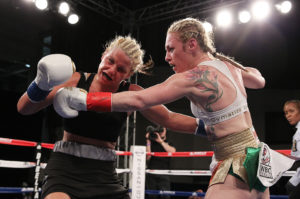 Hardy’s first bout against Kiss, of Budapest, Hungary, took place on the undercard of the March 4 welterweight unification battle between Keith Thurman and Danny Garcia, with the Brooklynite earning a unanimous points win. In the rematch, Hardy, 125.6, applied pressure from the outset and never let up, intent on establishing herself as the more physically imposing fighter. Determined to wear Kiss down, Hardy primarily focused on landing her power shots. In round four, a left hook and straight right rattled Kiss, who tired over the latter half of the bout. At this stage, Kiss’ offense amounted to winging haymakers, which Hardy easily evaded and countered. Scorecards read 80-72 twice, and 79-73, all in favor of Hardy via unanimous decision. With the loss, Kiss’ ledger fell to 14-4 (8 KOs).

At the conclusion of the bout, Hardy, now 20-0 (4 KOs) as a boxer, officially announced that she would be a two-sport athlete, making her MMA debut on the Bellator-promoted event at Madison Square Garden on June 24. 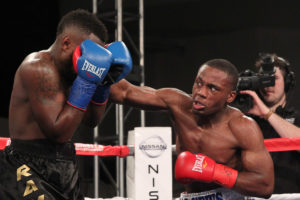 In his New York debut, 2016 American Olympian Charles Conwell, 153.2, of Cleveland, OH, handed Jeff Souffrant, 153.6, of Ft. Lauderdale, FL, his first knockout defeat, in the opening stanza. Co-promoted by DiBella Entertainment and Holden Productions, and managed by David McWater’s Split-T Management, the 19-year-old Conwell used his jab to bring up Souffrant’s guard, leaving his midsection an open target. Several well-placed straight rights to the body led to an overhand right to the temple that wobbled Souffrant. Conwell pounced on his adversary, throwing a barrage of shots until the referee jumped in to end the contest at 2:43 of the round. Earning his second straight first-round knockout, Conwell is now 2-0 (2 KOs), while Souffrant’s record fell to 3-2 (1 KO). Building an amateur record of 132-14, Conwell was an 11-time National champion. 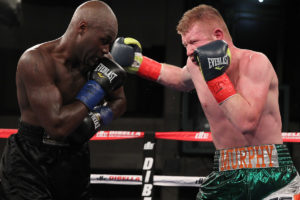 Irish Noel Murphy, 145.8, of County Cork, Ireland, but now living in Woodlawn, NY, faced his most experienced opponent yet in Brian Jones, 146.6, of Los Angeles, CA, and outworked him over eight exciting rounds. Murphy showed impressive accuracy, placing sneaky straight rights through Jones’ guard and countering well when the Californian was moving forward. The Irishman employed a sustained body attack in the middle rounds to diminish his foe’s offensive output as well. In round six, with Murphy on the hunt for a stoppage, thrilling exchanges developed to the delight of the crowd. With scores of 80-72, and 79-73 twice, Murphy earned a unanimous decision to improve to 10-0 (2 KOs). Jones’ record is now 14-8 (8 KOs). Entering the bout, Murphy was coming off his first pro victory at home in Ireland to pick up the BUI Celtic welterweight title in February. Murphy was a multi-time National champion as an amateur before relocating to Yonkers, NY, and embarking on his professional career in November 2014.

Fighting for the first time as a professional in his adopted home borough of Brooklyn, Ukrainian Iegor Plevako, 223.4, halted Lamarco Ellis, 313.6, of Wilson, NC, inside one round. Ellis charged at Plevako at the opening bell hoping to overwhelm him, but the Ukrainian found the proper distance and established his stiff jab. Plevako began to follow up his jab with straight rights, which often found his foe’s chin. Ellis kept his hands high attempting to block these shots then would counter with wild hooks. Late in the frame, a barrage of shots hurt Ellis, no longer able to defend himself, prompting the TKO stoppage at the 2:38 mark. Managed by David McWater’s Split-T Management, Plevako is now 3-0 (2 KOs), while Ellis dropped to 2-4 (1 KO). As an amateur, Plevako, born in Kharkov, Ukraine, was a two-time Ukrainian National champion before relocating to the United States and becoming a two-time New York Metro Golden Gloves champion.