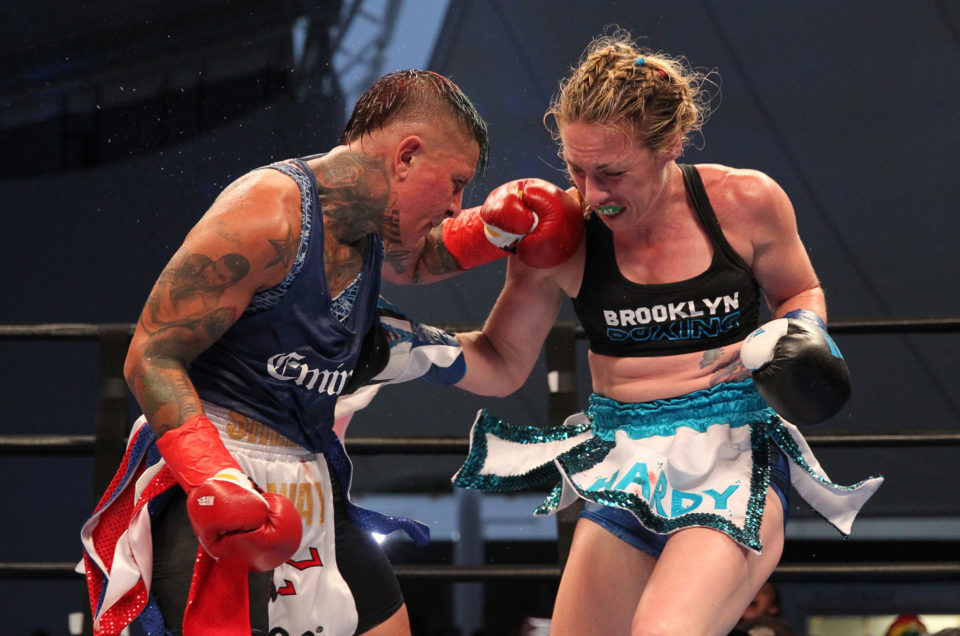 The rematch of the “2016 Female Fight of the Year” between Heather Hardy and Shelly Vincent will air on HBO.
(Photo Credit: Ed Diller/DiBella Entertainment)
New York, NY (October 5, 2018) In a rematch of their epic 2016 “Fight of the Year”, Brooklyn’s Heather “The Heat” Hardy (21-0, 4 KOs) and Shelly “Shelito’s Way” Vincent (23-1, 1 KO) will clash once again on October 27, at the Hulu Theater from Madison Square Garden. The scheduled 10-round bout, for the vacant WBO Women’s Featherweight World title, will open a sensational tripleheader televised live on HBO World Championship Boxing beginning at 10:00 p.m. ET/PT.
Previously announced on the telecast, Daniel Jacobs (34-2, 29 KOs) and Sergiy Derevyanchenko (12-0, 10 KOs) will battle for the vacant IBF World Middleweight Title and Alberto Machado (20-0, 16 KOs) will defend his WBA Super Featherweight Title against Yuandale Evans (20-1, 14 KOs).
“I’m so excited and so honored to be fighting on HBO,” said Hardy. “Shelly and I have wanted a rematch since the first fight ended and it’s fitting that it’s on this huge card and will be telecast on HBO from Madison Square Garden. The first fight was one of the very best of 2016 and the rematch will start right where we finished off.”
Said Vincent emphatically about the world title bout and prospect of winning the title belt, “I’m not leaving without my property!”
“I was thrilled to call Heather and Shelly and let them know that their rematch will be telecast on HBO,” said Lou DiBella, President of DiBella Entertainment. “I have to give a lot of credit to Peter Nelson and HBO for advancing women’s boxing by stepping up to air this fight.”
“The first fight between Heather and Shelly was an outstanding, back-and-forth battle, reminiscent of the Gatti-Ward fights that I co-promoted. I anticipate nothing less when the bell rings for the rematch. October 27 is a stacked card, in the intimate setting of Hulu Theater from Madison Square Garden, and I encourage as many fans as possible to join us live.”
Fighting on August 21, 2016, in Coney Island, NY, and in a nationally telecast bout, Hardy won a hard-fought majority decision over 10 rounds. Hardy has since won three additional fights including two victories versus former world title challenger Edina Kiss. Most recently, Hardy scored an eight-round decision against Iranda Torres on April 21, in Brooklyn.
A native of Providence, RI, Vincent has stayed busy with five wins since her loss to Hardy, the only defeat of her eight years as a professional. As a result of her performance against Hardy, the Connecticut Boxing Hall of Fame named her their “Fighter of the Year” for 2016, with Vincent becoming the first female recipient of that award. In her last bout on July 21, Vincent took home an eight-round decision victory against Calista Silgado.
Tickets are on sale NOW from TicketMaster.com priced from $46, $66, $106, $206 and $356 (ringside). The Jacobs vs. Derevyanchenko event is promoted by Matchroom Boxing and DiBella Entertainment in association with Fight Promotions Inc., Golden Boy Promotions and Miguel Cotto Promotions.
MEDIA CONTACTS
Matchroom Boxing USA, Anthony Leaver,Anthony.Leaver@matchroom.com, +44 7813 845144
DiBella Entertainment, Bernie Bahrmasel, (773) 592-2986, BernieBahrmasel@yahoo.com
MSG, Larry Torres, larry.torres@msg.com, (212) 631-5178
Golden Boy, Gabriel Rivas, gabriel@goldenboypromotions.com, 213-233-4225
Patrick Byrne/HBO, patrick.byrne@hbo.com, (212) 512-1361
Media Credentials: JACOBS VS. DEREVYANCHENKO MEDIA CREDENTIALS
Website Admin