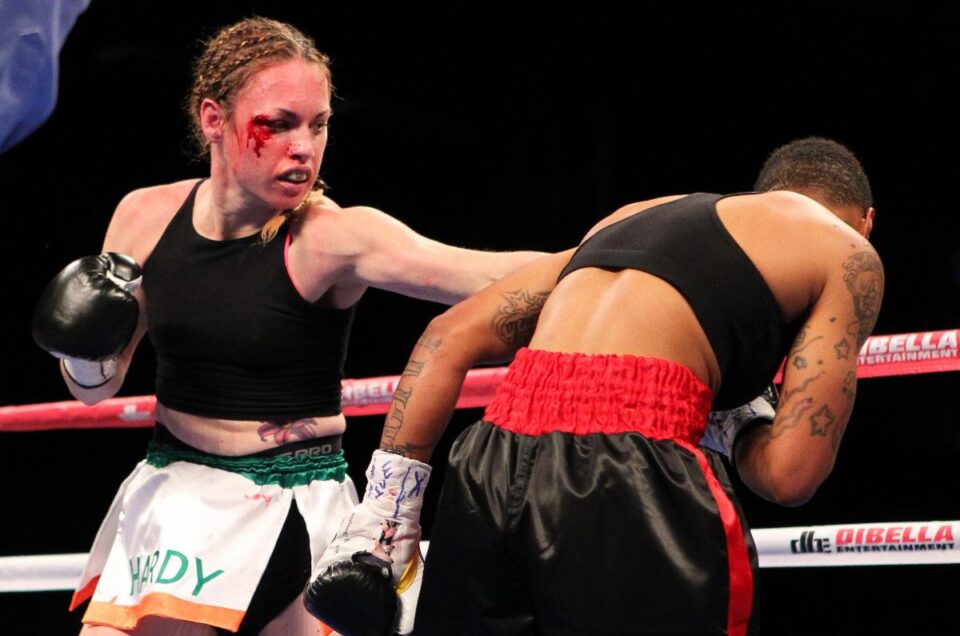 Hardy has been promoted by DiBella Entertainment for the entirety of her professional boxing career, starting with her pro debut on August 2, 2012, at Roseland Ballroom in New York City.

“Heather Hardy made her pro debut with DiBella Entertainment and is the first female fighter we ever signed to a promotional agreement,” said Lou DiBella, President of DiBella Entertainment. “She has made a name for herself in two sports and has cemented her place as the Micky Ward of women’s boxing, a blood-and-guts warrior. Heather is family and we look forward to the rest of her journey, starting with her comeback on May 14, in Murfreesboro, TN, live on UFC Fight Pass.”

“I’m excited to be back with Lou boxing again,” said Hardy. “Boxing is a dangerous business and I wouldn’t want to be a part of it without someone there who I know has my back like Lou. Good news, bad news, big money or no money, Lou always shoots straight with me, and that’s something I’ve grown to respect and appreciate. We’re like a family in both the good and bad ways. I annoy the crap out of him sometimes, but the love will always be there.”

Hardy will return to action in an eight-round lightweight clash, headlining “Broadway Boxing Presents: Ladies Fight” on Friday, May 14, against Jessica “The Cobra” Camara (7-2), of Montreal, Canada. Held at the Embassy Suites Nashville SE, in Murfreesboro, TN, the event will be streamed live and exclusively on UFC FIGHT PASS®, the world’s leading streaming service for combat sports, starting at 8:30pm. ET / 5:30pm PT.

Tables for the event, priced at $800 and $600 (for a group of 10), and limited General Admission tickets for $35, are on sale now at MurfreesboroBoxing.EventBrite.com. The Embassy Suites Nashville SE is located at 1200 Conference Center Boulevard, Murfreesboro, TN 37129. Doors will open on the night of the event at 6:30pm CDT, with the first bell at 7:00pmCDT.

Fighting on October 27, 2018, in front of thousands of her supporters at Madison Square Garden, Hardy fulfilled a lifelong dream of winning a world title. Her dominant victory in a rematch against Shelly Vincent, broadcast on HBO World Championship Boxing, earned her the WBO featherweight world title.

Among the most recognizable faces in combat sports, Hardy has been a true ambassador for women’s boxing and featured in numerous top media platforms, including The New York Times, ESPN, Sports Illustrated and Yahoo Sports.