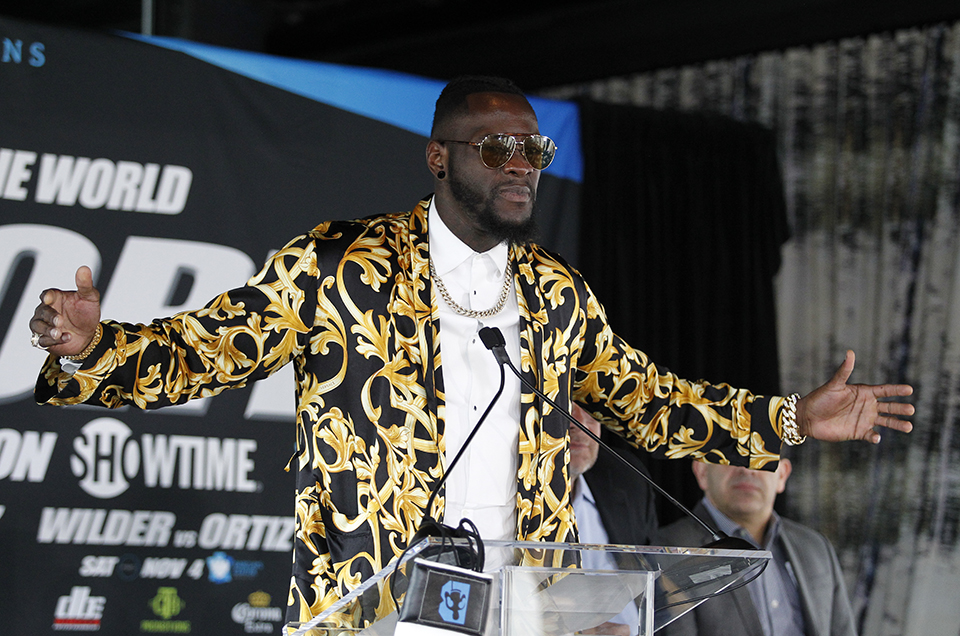 BROOKLYN (Sept. 20, 2017) – Undefeated WBC Heavyweight World Champion Deontay “The Bronze Bomber” Wilder will make his sixth title defense when he meets hard-hitting Cuban southpaw Luis “The Real King Kong” Ortiz on SHOWTIME CHAMPIONSHIP BOXING, in an event presented by Premier Boxing Champions on Saturday, Nov. 4 live on SHOWTIME (9 p.m. ET/6 p.m. PT) from Barclays Center, the home of BROOKLYN BOXING™.
Tickets for the live event, which is promoted by DiBella Entertainment and TGB Promotions, are on sale now and can be purchased at ticketmaster.com, barclayscenter.com or by calling 800-745-3000. Tickets can also be purchased at the American Express Box Office at Barclays Center. Group discounts are available by calling 844-BKLYN-GP.
An exciting lineup of undercard attractions will be announced soon to support this titanic heavyweight matchup. True heavyweights in every sense of the word, the 6-foot-7, 228-pound Wilder and the 6-foot-4, 240-pound Ortiz have 60 combined knockout victories.
“I’ve been waiting for this moment for a long time and I’m excited that the time has come to meet Ortiz,” said Wilder. “Luis Ortiz is considered the boogeyman of the sport and I am the hardest hitter in boxing. When you put us together in a ring, you will get one of the best heavyweight fights in a long time. I will unify the division. This I promise. This is the first step towards unifying. Any heavyweight that gets in my way is getting knocked out.”
“Wilder has been doing a lot of talking about me and this fight,” said Ortiz. “I’m tired of hearing it. I’m not that big on talking. I like to do all my talking in the ring and that’s what I plan to do. I respect him. I know he hits hard, but I hit hard too. It’s going to be a great fight. I can’t wait to get in the ring and shut him up in front of everybody at Barclays Center on SHOWTIME on November 4.”
“This fight is happening because Deontay Wilder wants to beat the best, regardless of the risk,” said Lou DiBella, President of DiBella Entertainment. “He will knock ‘King Kong’ off the Empire State Building for the world to see on November 4 at Barclays Center.”
“The resurgence of the heavyweight division is going to be on full display at Barclays Center and on SHOWTIME on November 4,” said Tom Brown, president of TGB Promotions. “Deontay is facing his toughest challenge yet in the undefeated Cuban, giving him the opportunity to really prove himself. We are thrilled to be a part of the action and can’t wait until fight night.”
“Deontay Wilder vs. Luis Ortiz is one of the highlights of what has been an exceptional year for boxing on SHOWTIME,” said Stephen Espinoza, Executive Vice President and General Manager, SHOWTIME Sports.  “We have consistently delivered the biggest names in boxing in their most important fights. The main event on Nov. 4 features two dynamic punchers with a 92-percent knockout ratio between them.  It will be the 21st world championship fight on SHOWTIME this year and the 16th time we’ve seen undefeated fighters going head-to-head.  It is clear that no other network is more committed to delivering the most significant bouts directly to its subscribers than SHOWTIME.”
“On November 4 Barclays Center will once again host one of the year’s best fights,” said Brett Yormark, CEO of Brooklyn Sports & Entertainment. “Deontay has made his mark in Brooklyn, and I am thrilled to welcome him back to our ring alongside a tough competitor in Luis Ortiz, who will be fighting here for the first time.”
The 31-year-old Wilder (38-0, 37 KOs), the only reigning American heavyweight world champion, won his WBC title with a dominant 12-round unanimous decision over Bermane Stiverne on Jan. 17, 2015 -the birthday of legendary heavyweight champion Muhammad Ali.
Wilder, a Bronze Medal winner for the U.S. Olympic boxing team at the 2008 Beijing Games, has successfully defended the title five times. In his previous defense at Barclays Center, Wilder scored a memorable ninth-round knockout over Artur Szpilka back in Jan. 2016. In his most recent defense, Wilder, of Tuscaloosa, Ala. stopped Gerald Washington via fifth-round technical knockout before a hometown crowd at Legacy Arena in Birmingham on Feb. 25.
The 38-year-old Ortiz (27-0, 23 KOs), of Camaguey, Cuba by way of Miami, Fla., will make his SHOWTIME and Barclays Center debut when he meets Wilder for his first title shot. The hard-hitting southpaw turned pro seven years ago after defecting from Cuba and has since been steadily climbing the heavyweight ladder. He cemented his standing in the division with victories over veteran contenders Bryant Jennings, Tony Thompson and Malik Scott and is the No. 1-ranked contender by the WBC.
If Ortiz wins, he will become the first Cuban born fighter to win a heavyweight world championship.
# # #
For more information visit www.sho.com/sports , www.premierboxingchampions.com,
follow us on Twitter @ShowtimeBoxing, @PremierBoxing, @LouDiBella, @DiBellaEnt, @TGBPromotions, @BarclaysCenter and @Swanson_Comm  or become a fan on Facebook at www.Facebook.com/SHOBoxing, www.Facebook.com/barclayscenter,
and www.Facebook.com/DiBellaEntertainment
CONTACTS:
Swanson Communications: (202) 783-5500, contact@swansonpr.com
DiBella Entertainment: (212) 947-2577
Bernie Bahrmasel, TGB Promotions: (773) 592-2986
Tim Smith, Premier Boxing Champions: timothy@haymonboxing.com
Chris DeBlasio, Showtime Networks Inc.: (212) 708-1633
Matt Donovan, Showtime Networks Inc.: (212) 708-1663
Flo Jocou, Showtime Networks Inc.: (212) 708-7319
Mandy Gutmann, BSE: (718) 942-9587
Stuart Bryan, BSE: (718) 942-9574
Credentials: To apply for credentials visit www.swansonpr.com/credentials; Deadline to apply is October 25
Website Admin