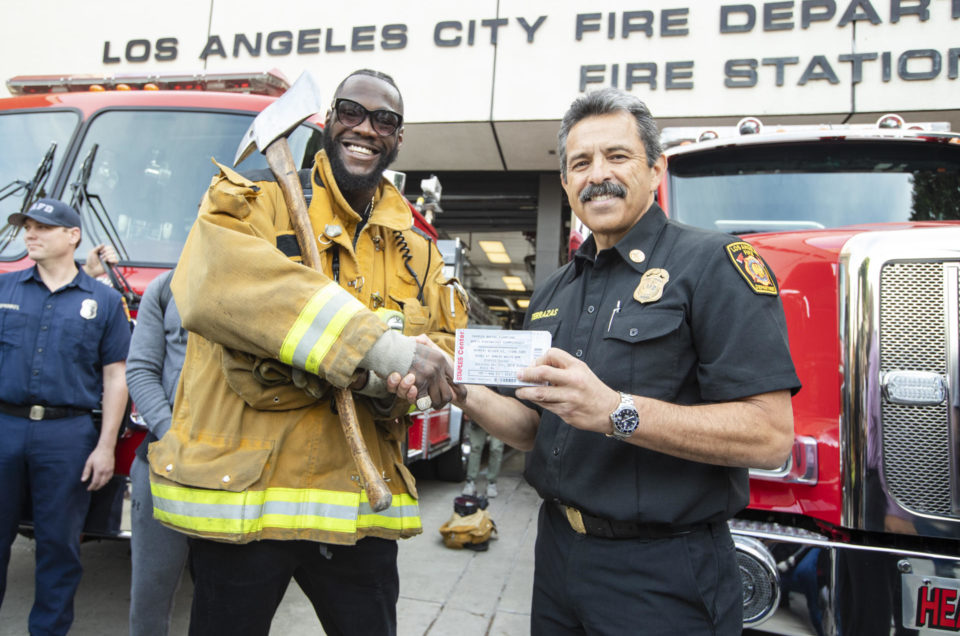 (Wilder & L.A. Fire Department Chief Ralph Terrazas)
WILDER PRESENTS TICKETS TO LAFD FIRE CHIEF AT
ENGINE 3 HOUSE IN DOWNTOWN L.A.
&
FURY GIFTS TICKETS TO LA COUNTY FIRE CHIEF AT
L.A. COUNTY FIRE HEADQUARTERS
Click HERE for Photos from Esther Lin/SHOWTIME
LOS ANGELES (November 27, 2018) – WBC Heavyweight World Champion Deontay Wilder and lineal heavyweight champion Tyson Fury presented tickets for this Saturday’s heavyweight title showdown to area first responders in recognition of the men and women who battled the recent fires in Southern California.
Before he meets Fury on SHOWTIME PPV®from STAPLES Center, Wilder delivered tickets for first responders alongside L.A. Fire Department Chief Ralph Terrazas at LAFD Station 3. Wilder spent time with the first responders and donned the firefighter uniform while conducting interviews.
“These men and women risk their lives each and every day,” said Wilder. “When the duty calls, they’re at the top of their game. I really respect the hard work that they do and I’m blessed to be here and be amongst so many brave people.
“I just really appreciate everyone here and I’m looking forward to seeing them at the fight on Saturday night. This donation is for all of the things that they do on a daily basis, and everything they do that people don’t see. They are always ready when the time comes. I know that the city and the state appreciates everything you do.”
“We’re very proud to host the champ here at LAFD Station 3,” said Chief Terrazas. “We wish you well and we look forward to celebrating with you on Saturday night. It’s very special that Deontay wanted to come here and recognize all the hard work that these men and women do.”
Fury, who spent his training camp Southern California, joined L.A. County Fire Chief Daryl Osby at the L.A. County Fire Department Headquarters to meet with first responders.
“These firefighters are heroes who have been out there every day saving lives,” said Fury. “Since I’ve been here I’ve been following the situation and the fantastic job these men and women have been doing. I’m glad to be here to tell them how thankful I am for what they do and help give them a break Saturday night.
“Training in California has really opened my eyes to see so many different cultures and so many different things that are going on here. There’s a lot of homeless people on the streets and when I go home I’m going to build homes for the homeless and set up funds for those in need. Being here has given me that extra push to do more.”
“We’re very thankful for these tickets and for the support shown today for our firefighters,” said Chief Osby. “They put their lives on the line to protect our citizens and our community and we’re happy that their efforts are acknowledged.”
(Fury & L.A. County Fire Chief Daryl Osby)
#          #          #
Tickets for the event, which is promoted by BombZquad Enterprises and Queensberry Promotions, in association with TGB Promotions and DiBella Entertainment, are on sale now and are available via AXS.com. Wilder vs. Fury will be produced and distributed by SHOWTIME PPV. The suggested retail price (SRP) for the pay-per-view telecast is $64.99 for standard definition.
ABOUT WILDER vs. FURY
Deontay Wilder vs. Tyson Fury pits the WBC Heavyweight World Champion Wilder against the lineal heavyweight champion Fury on SHOWTIME PPV® Saturday, December 1 from STAPLES CENTER in Los Angeles and presented by Premier Boxing Champions. The PPV undercard begins at 9 p.m. ET/6 p.m. PT and will feature unbeaten unified super welterweight world champion Jarrett Hurdreturning to take on Jason Welborn, Cuban heavyweight slugger Luis Ortizfacing-off against Travis Kauffmanand rising undefeated heavyweight Joe Joycebattling Joe Hanks.
For more information visit www.SHO.com/Sports, www.premierboxingchampions.com and www.staplescenter.com follow on Twitter @ShowtimeBoxing, @SHOSports, @PremierBoxing @BronzeBomber, @Tyson_Fury, @TGBPromotions, @STAPLESCenter and @Swanson_Comm or become a fan on Facebook at www.Facebook.com/SHOSports, www.Facebook.com/PremierBoxingChampions and www.facebook.com/STAPLESCenter.
Website Admin