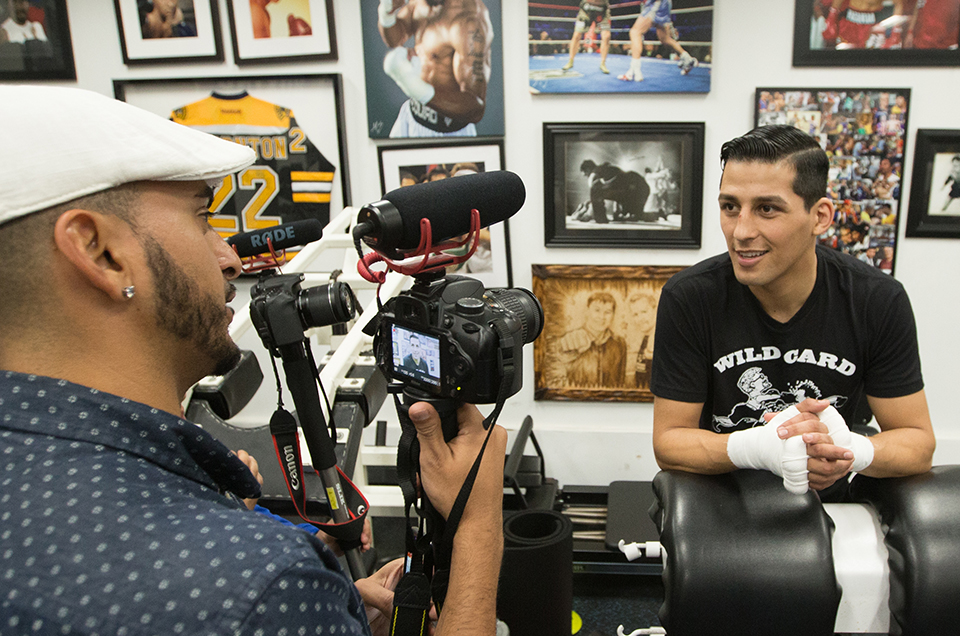 LOS ANGELES (March 29, 2018) – Fighters training in the Los Angeles-area and competing in upcoming Premier Boxing Champions events on April 7 and April 21 hosted a media workout Thursday as they prepare to enter the ring live on SHOWTIME.

Middleweight contender Hugo Centeno Jr. also worked out for media before he enters the ring on Saturday, April 21 from Barclays Center, the home of BROOKLYN BOXING™.

The April 21 event features Centeno Jr. facing Jermall Charlo for the Interim WBC Middleweight Title. Coverage on SHOWTIME begins at 9 p.m. ET/6 p.m. PT and is headlined by a showdown between Adrien Broner and Jessie Vargas.

Here is what the fighters had to say Thursday from Wild Card Boxing Club:

“Training camp has been fantastic. I rushed back from my shoulder injury in my last fight. I couldn’t believe I lost my title and I could only blame myself. I’m lucky to have this chance to make it right and regain my title.

“I learned that you can’t rush fitness. I had a reconstructive surgery and I came back far too quick. I learned my lesson the hard way. Now I have to get it back the hard way.

“Fighting in Las Vegas is another dream come true. So many great fights have been there and I just can’t wait. The atmosphere and the vibe will be special. I’m going to put on a fantastic performance and regain my title.

“As soon as the doctor said that some athletes come back after six months from my injury, I was determined to fight in 2017. Everyone can see that I was slow in the ring. I was ashamed of my performance. It was embarrassing and I’m looking to erase that on April 7.

“I’ve watched the first fight with Truax a couple of times but it’s very tough because I know that’s not me in there. For the past six weeks I’ve felt so much better. My jab is sharp again and everyone will see that when I become a two-time world champion.

“Truax has tasted what it’s like to be a world champion. He’s going to be hungry and have that burning desire to beat me. At the end of the day, I’m just too good for him and I’m going to prove it. I have to make a statement.”

“I’m feeling great right now. The rib injury was somewhat a blessing in disguise. It gave me a training camp for my training camp. Once I came back from the injury I was already in great shape. I feel great and I’m not depleted whatsoever. I’m 100 percent mentally ready for this fight.

“I was disappointed at first because I wanted this fight to happen so badly. I had a chance to regroup and talk with my team and they put me on the right direction. I’ve had a great camp and I believe everything happens for a reason.

“I don’t pay attention to anything people are saying about Charlo. I’m staying focused because I know that this fight can change my whole career. I’m ready to win.

“Charlo is a strong fighter. A lot of fighters stand in front of him but he’s also a great boxer. I feel like I have those same attributes that he has. It’s going to be a chess match and a great fight.

“We have to see who the smarter fighter is on April 21. I know Charlo says he’s going to knock me out in one round, I’m not planning to let him do that. If I get my opportunity, I’m going to take it and I’m going to hurt him.

“I learned from my loss that I can’t underestimate anyone in this sport. I’ve stayed in the ring and worked the whole time since the loss and it’s shown. Getting that big knockout over Immanuwel Aleem was a great moment and has helped catapult me back to the top of this division.

“This is the kind of fight I’ve looked forward to since I was seven years old. I’m just a kid from a small town trying to make his dream come true. Now the moment is finally here.”

“I’m not worried about the IBF belt right now. I’m worried about Julian ‘J-Pebbles’ Williams on April 7. I see a lot of things from Williams. I see fear and I don’t think he’s totally there mentally. He should have taken harder fights before this one. This is the wrong fight for him.

“I’ve had seven knockouts in a row and this is going to be eight. It’s nice to stay active and be able to jump on an opportunity like this when it presents itself.

“It’s always important to put on a good show for the fans. I’m a showman. I give the fans what they want. All action.

“It doesn’t matter where I fight, I’ll be ready. I’m excited to go back to Las Vegas. This is my third time fighting there and I’m planning on making it 3-0.

“This is a new training camp. I’m working in Los Angeles with John Pullman and Buddy McGirt. The weather is good out here and I think everything is going in my favor. I love the atmosphere out here.”