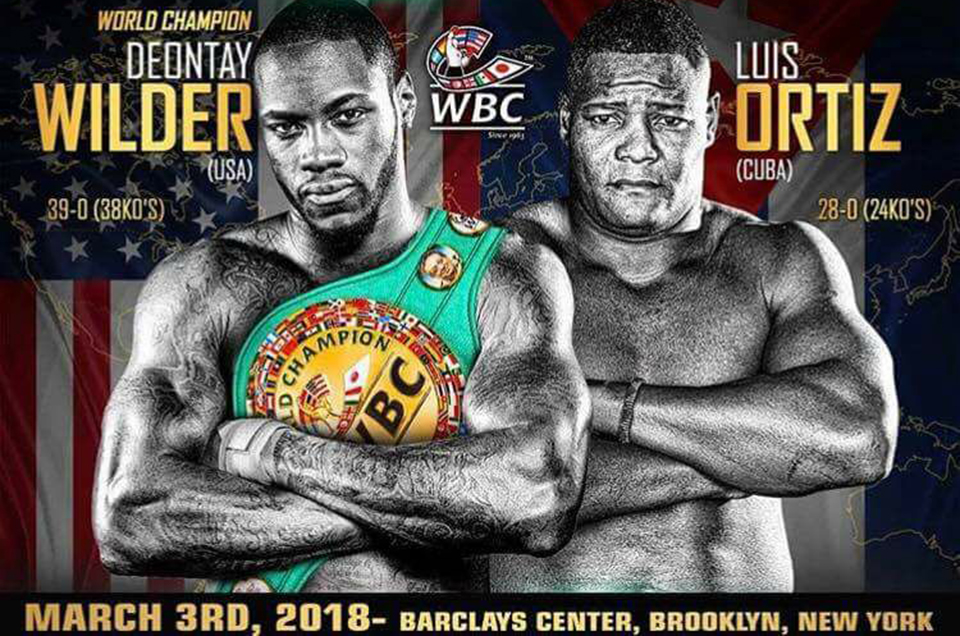 Next Saturday’s Deontay Wilder vs. Luis Ortiz SHOWTIME CHAMPIONSHIP BOXING® Doubleheader Will Open With Anticipated Rematch Between Andre Dirrell & Jose Uzcategui
Saturday, March 3 LIVE on SHOWTIME At 9 p.m. ET/6 p.m. PT From Barclays Center In Brooklyn & Presented By
Premier Boxing Champions
BROOKLYN (Feb. 23, 2018) – Middleweight contender Hugo Centeno Jr. suffered a rib injury while training and his Interim WBC Middleweight World Championship bout with Jermall Charlo has been rescheduled for a Premier Boxing Champions event on Saturday, April 21live on SHOWTIME.
The March 3 SHOWTIME CHAMPIONSHIP BOXING telecast continues as a doubleheader beginning at 9 p.m. ET/6 p.m. PT from Barclays Center in Brooklyn.  In the main event, WBC Heavyweight World Champion Deontay Wilder will make the seventh and most difficult defense of his title against fellow-unbeaten heavyweight Luis Ortiz.
In the opening bout of the March 3 doubleheader, Andre Dirrell and Jose Uzcategui will meet for the Interim IBF Super Middleweight World Championship in an immediate rematch of one of 2017’s best and most controversial fights.
Charlo vs. Centeno will now be a featured bout on the previously announced April 21 SHOWTIME CHAMPIONSHIP BOXING telecast presented by Premier Boxing Champions. Four-division world champion Adrien Broner will face undefeated former champion Omar Figueroa and one of boxing’s brightest young stars, Gervonta Davis, returns to the ring as the 23-year-old undefeated former champion looks to regain a title in the 130-pound class.
“While the injury to Centeno is unfortunate, we’re pleased to have the flexibility to keep the Charlo-Centeno fight on our 2018 boxing schedule,” said Stephen Espinoza, President, Sports & Event Programming, Showtime Networks Inc.  “The March 3 SHOWTIME CHAMPIONSHIP BOXING event remains a can’t-miss night for any fight fan, with Deontay Wilder facing the most dangerous opponent of his career in Luis Ortiz, and Andre Dirrell and Jose Uzcategui settling the score in a rematch of one of 2017’s best fights.”
“I’m devastated.,” said Centeno. “I’ve been in the gym for a long time. Being so close to a fight and accomplishing my dream of a world title it’s devastating.
“It happened during sparring. I tried to work through the pain and as the day progressed and the adrenaline subsided I had to go to the ER and get checked out. It’s a good enough injury that it had to be postponed. Nothing was broken, but it was severe enough to keep me from fighting.
“I was just about to peak. Now I have to taper off a bit and cut back to let my body recover and then pick it up and get some momentum back.”
“I’m ready to go,” said Charlo. “I’m 167 pounds right now, and this was the best camp I’ve ever had. I’m so disappointed. I’m at a loss for words. When you want something so bad and you don’t get it, you can’t be a kid about it. You just have to deal with it.
“I’m hungry and I’m ready to get back in the ring. I’m still coming to the fight though. I’m going be there to support Deontay. I love Barclays Center and all my fans in Brooklyn.”
#          #          #
For more information visit www.premierboxingchampions.com,
follow us on Twitter @PremierBoxing, @LouDiBella, @TGBPromotions, @BarclaysCenter, @Brooklyn_Boxing and @Swanson_Comm  or become a fan on Facebook at www.Facebook.com/barclayscenter,
and www.Facebook.com/DiBellaEntertainment. PBC is sponsored by Corona Extra, La Cerveza Mas Fina.
CONTACTS:
Swanson Communications: (202) 783-5500, contact@swansonpr.com
Bernie Bahrmasel, DiBella Entertainment:(212) 947-2577
Monica Jaffe, TGB Promotions: (818) 817-8001
Tim Smith, Premier Boxing Champions: timothy@haymonboxing.com
Chris DeBlasio, Showtime Networks Inc.: (212) 708-1633
Matt Donovan, Showtime Networks Inc.: (212) 708-1663
Flo Jocou, Showtime Networks Inc.: (212) 708-7319
Mandy Gutmann, BSE: (718) 942-9587
Stuart Bryan, BSE: (718) 942-9574
Steve Pratt, BZA PR for SHOWTIME: (310) 408-4555
Website Admin