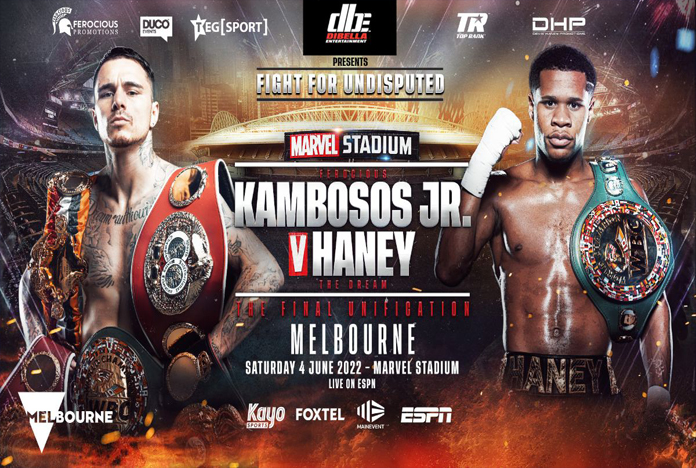 Australian two-time bantamweight world title challenger Jason “Mayhem” Moloney and New Zealand-born heavyweight contender Junior Fa hope to showcase their talents for the home region fans at Marvel Stadium in Melbourne, Australia, on the undercard of the George Kambosos Jr.-Devin Haney undisputed lightweight world title showdown. The Kambosos-Haney world championship event is projected to be one of the biggest boxing events ever on Australian soil.

In a swing bout, cruiserweight David Nyika (2-0, 2 KOs) will be showcased in 6/4-rounder against an opponent to be named. Nyika, from Hamilton, New Zealand, captured a bronze medal at the Tokyo Olympics last summer. A beloved sporting hero in his country, Nyika has earned his stripes as a sparring partner for heavyweight champion Tyson Fury.

“When it comes to presenting an undercard worthy of its main event — the battle between world champions George Kambosos Jr. and Devin Haney for the undisputed lightweight world championship — it’s Aussie Rules.  Australian fight fans in Marvel Stadium and viewers around the globe will be treated to a feast of exciting all-action bouts, many featuring contenders and prospects from Australia, as well as New Zealand. And those not televised live on ESPN will be streamed to the U.S. on ESPN+,” said Lou DiBella, President of DiBella Entertainment.  “We are prepared to make history in Melbourne.”

Browne (30-3, 26 KOs) won the WBA Oceania title with a knockout victory over Faiga Opelu in December and is a former WBA world titlist. The 32-year-old Fa (19-1, 10 KOs) is looking to get his career back on track after losing to former world champion Joseph Parker in his last outing in February 2021. Fa has notable wins over American veterans Devin Vargas and Dominick Guinn.

“I would love nothing more than to fight for another world title, and Junior Fa is standing in my way,” Browne said. “If I can put him away early, that will send a message to the boxing world that I am far from finished. He has only lost once in his career, to Joseph Parker. I plan to hand him his second defeat.”

“I am 100 percent back myself, but I’m not taking Lucas lightly, as he is a former world champ and was stopped by Paul Gallen with some illegal blows, so I don’t count that as a loss for him,” Fa said. “He has his power, and we saw him use it to KO his last opponent. I’ll be getting the best Lucas Browne for this fight as I’m in the way of him being a contender again. It’s a huge opportunity for him and it’s going to be a tough fight.”

Moloney (23-2, 18 KOs) has re-ignited his career since an October 2020 knockout loss to pound-for-pound great Naoya Inoue. He defeated top contender Joshua Greer Jr. last August and made his 2022 debut in April with a one-sided decision over Francisco Javier Pedroza. He is currently ranked No. 2 by the WBC and No. 3 by WBO. Palicte (28-4-1, 23 KOs), from Bago City, Philippines, twice challenged for world titles at junior bantamweight and has won three consecutive fights. He is world-rated No. 6 by the IBF.

Moloney said, “I am grateful to Top Rank and Lou DiBella for the opportunity to be part of the biggest event in Australian boxing history. It is a dream come true. I’m expecting a tough fight against a former world title challenger in Aston Palicte, as he has shown that he can perform at the top level. I will be coming with everything I have to deliver the impressive performance of my career. Get ready for Mayhem!”

The undercard, which will be streamed in the U.S. exclusively on ESPN+, features three highly touted Ferocious Promotions prospects: Terry Nickolas, Isaias Sette and Hussein Fayad. Nickolas (2-1, 2 KOs), from Sydney, takes a step up in opposition experience when he rumbles with Lachlan Higgins (7-4-1, 2 KOs), from Mornington, Australia, in a six-round junior middleweight bout. Junior middleweight Sette and junior lightweight Fayad, both from Sydney, will be making their pro debuts in four-round bouts. Sette will fight Melbourne-born knockout artist Luke Gersbeck (2-0, 2 KOs), while Fayad will take on Pom Thanawut Phetkum (1-1), from Springvale, Australia. Taylah Robertson (4-1, 1 KO), from Brisbane, Australia, and Sarah Higginson (3-0-1, 1 KO), from Perth, Australia, will face off in a five-round junior bantamweight battle. Both fighters enter this bout having won their previous title fights. Robertson scored an eight-round unanimous decision over Kylie Fulmer in their Australia Female bantamweight title fight while Higginson scored her first knockout, stopping Danni Mace in the fourth round to capture the vacant Australian National Boxing Federation Australasian Female bantamweight title.