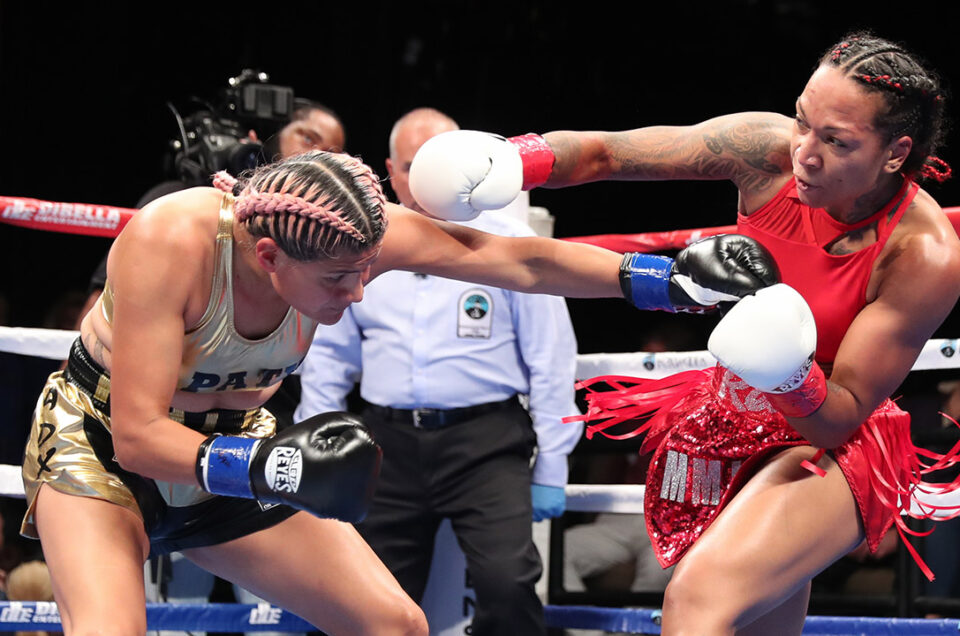 The IMPACT Network, in conjunction with SMH Group, will present IMPACT Championship Boxing brought to you by T&K Boxing Promotions in association with DiBella Entertainment, featuring an exciting women’s world title fight between Kali Reis and Kandi Wyatt. The event takes place on Friday, November 6, from the St. Petersburg Clearwater Marriott, in St. Petersburg, FL, and will premiere on IMPACT Network, Saturday, November 7, at 10:30pm ET.

In the main event, Kali “KO Mequinonoag” Reis (16-7-1, 5 KOs), of Providence, RI, will meet Kandi “Krush” Wyatt (10-1, 3 KOs), of Calgary, Alberta, Canada, in a 10-round clash with the vacant WBA world female super lightweight title on the line. The winner of this high stakes battle could be in line for unification matches against IBF champion Mary McGee or WBO champion Christina Linardatou.

“We are pleased to be back on November 6 for the live event, which will air November 7, at 10:30pm ET, to IMPACT’s 90 million homes via basic cable,” stated Steven Marcano, of the SMH Group, the programming partner with Impact Media Group. “After discussing with the IMPACT executive team, Bishop Wayne T. Jackson, Royal Jackson and Terry Arnold, we all agreed that we wanted to work with Lou DiBella, who is now a Hall-of-Famer, and he’s brought us a terrific event featuring a female world title fight worthy of IMPACT Network. We were supposed to do another event with Lou earlier this year, but it was cancelled due to Covid-19. IMPACT plans to have a 24-show calendar for 2021 and plans many more shows with DiBella Entertainment. IMPACT Boxing is also excited to welcome boxing great Antonio Tarver, who will call the action from ringside, along with Curran Bhatia and ringside reporter and boxing insider Zach Hirsch.”

“T&K Boxing Promotions is happy to announce that we are working together with DiBella Entertainment on our November 6 event, known locally as ‘All or Nothing’, and we are thrilled that it will be broadcast on IMPACT Network,” said Jesus Escalera, President of T&K Boxing Promotions. “We were all set to present a great show featuring local talent and then Lou DiBella approached us with an opportunity to televise it. Lou also provided us with a tremendous women’s world championship main event, along with other up-and-coming prospects for the undercard. It will be a special night for us, as it is part of the Florida Boxing Hall of Fame’s induction weekend. The Class of 2020 will be in attendance.”

Reis is a former WBC middleweight world champion. Her nickname, “KO Mequinonoag”, which means “many feathers, many talents”, represents her Native American heritage, of which she is part Cherokee, Nipmuc, and Seaconke Wampanoag. In one of women’s boxing’s biggest events, Reis challenged then-undisputed welterweight world champion Cecilia Braekhus in 2018. It was the first women’s bout telecast by HBO World Championship Boxing in its 45-year history. Remarkably, the fight averaged 904,000 viewers, the second highest rating by the network for boxing during that year. Reis has rebounded with three wins in a row.

Rising lightweight Victor Padilla (8-0, 7 KOs) will be featured in a six-round bout. Trained by Rashiem Jefferson and managed by Carlos Rosario, the heavy-handed Padilla has stopped six of his opponents inside the opening round. Born in Puerto Rico, now living in Berlin, NJ, Padilla turned professional in December 2016, following a stellar amateur career that included three National championships, ending with a record of 90-7.

Elvis Garcia (8-0, 5 KOs) will clash with Dell Long (7-6-2, 4 KOs), of Artie, WV, in an attractive six-round heavyweight bout. Born in Mexico, now living in Indio, CA, trained by Joel Diaz, Garcia returns to the ring following a victory against Hugo Trujillo. He also recently gained invaluable experience working as the “secret weapon sparring partner” that promoter Eddie Hearn referred to with regard to Anthony Joshua’s preparation for his rematch against Andy Ruiz last year. Prior to turning pro, Garcia was an outstanding amateur with a record of 85-10, 42 KOs. After winning gold at the Washington State Golden Gloves, as well as a silver and two bronze medals at USA National Tournaments, Garcia moved to Tijuana, Mexico, where he won the Mexican National Championships and the Mexican Golden Gloves Tournament twice. Long is coming off of an unexpected upset win against Don Haynesworth (16-4-1) on August 29, and he also owns a knockout victory against 13-1 Travis Clark.

Heavyweight prospect Jeremiah Milton (1-0, 1 KO), originally from Tulsa, OK, now based in Las Vegas, NV, will compete in a four-round bout against Robert Brothers, of Titusville, FL. Milton’s pro debut on August 20 lasted just 75 seconds, ending with a knockout of Dennis Vance Jr. As an amateur, Milton was a super heavyweight silver medalist at the 2019 US Olympic Trials. In preparation for his pro debut, Milton sparred with Luis Ortiz, Joe Joyce and Guido Vianello.