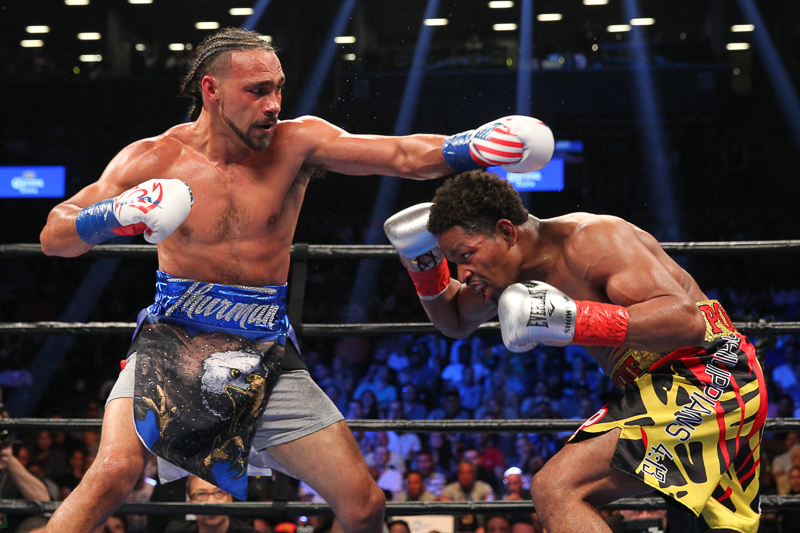 BROOKLYN (June 26, 2016) – Prizefighting returned to CBS on Saturday with a Fight of the Year candidate as undefeated welterweight world champion Keith Thurman edged former world champion Shawn Porter in a close but unanimous decision scored 115-113 by all three ringside judges.

The 12,718 fans in attendance at Barclays Center in Brooklyn and the viewers across the U.S. watching the first primetime boxing event on CBS since Muhammed Ali-Leon Spinks in 1978 were treated to a slugfest between two of the brightest stars in boxing’s glamour division.

Thurman (27-0, 22 KOs) and Porter (26-2-1, 16 KOs) combined to throw over 1200 punches in the SHOWTIME CHAMPIONSHIP BOXING on CBS event, presented by Premier Boxing Champions.  The marquee showdown was a story of accuracy vs. activity, as Thurman landed 50 percent of his power shots, compared to 38 percent for Porter, and 44 percent of his total punches compared to just 36 percent for the challenger.  While Thurman landed at a higher percentage, Porter was the busier fighter, throwing over 100 more punches across 12 rounds.

“One Time” and “Showtime” delivered as advertised, with the powerful sharpshooter buckling Porter multiple times, while the swarming and smothering Porter barreled forward to bully Thurman into the ropes.  And while there were no knockdowns, the back-and-forth blockbuster never lacked action and culminated in a standing ovation in the second-highest attended boxing event in Barclays Center history.

“I want to thank Shawn Porter for a tremendous fight.  He’s a great warrior,” said Thurman.  “Defense is the key to victory.  He smothers his punches a lot and makes it difficult for the judges to score.  I was able to rock him with clear, effective blows and I believe that was the difference today.

“I would give him a rematch. It was great fight.  He was a great opponent.  Everyone was saying would he be my toughest opponent to date.  I wasn’t able to drop him but I did buckle him a few times.”

The former world champion Porter, a perennial underdog but consummate gentleman, didn’t complain about being on the losing end of his second close decision in a title bout.

“We worked hard, Keith is a great champion,” Porter said. “My dad says to keep your head up.  I think I won the fight, but I’m satisfied because the competitor came out tonight.

The opening bout of the CBS telecast featured a matchup of undefeated super welterweights as Jarrett Hurd graduated from prospect to legitimate contender in the stacked 154-pound class with a dominating 10th round TKO over Oscar Molina.

Hurd (18-0, 12 KOs) got to work early, flooring Molina for the first time in his career in the opening round with a powerful counter right uppercut.  The bigger and taller Hurd was the more active fighter from the outset, dismantling the previously unbeaten Mexican Olympian with a supremely effective inside game.  Hurd threw nearly 750 punches over 10 rounds, compared to just 376 for Molina, connecting on 220 power shots at a nearly 40 percent clip.

“This is definitely a big win for my career,” Hurd said.  “He was taking a lot of shots, but he knew how to survive.  It was a big uppercut that knocked him down in round one. People know from my last fight that I have a great right uppercut.  He was hurt a couple of times. I don’t think it was a bad stoppage. Molina is a very tough guy who just kept coming through.

“This fight here puts me up with the top contenders in the division. I felt like I could have gone three or four more rounds. I was getting stronger as the fight went on.  We’re going right back to the gym so we can get in there again.”

Molina (13-1-1, 10 KOs) protested, but barring a stunning knockout he was just seconds away from suffering the first loss of his career via a unanimous decision.

“I went low and I had my head down and he caught me with that uppercut in the first round. He got me with a shot I wasn’t expecting but it was definitely a flash knockdown. I wasn’t hurt.

“I was supposed to use my footwork a lot more but I ended up smothering my shots. He had an awkward defense with a lot of bending down and I couldn’t get into a rhythm.

“This was a big opportunity for me and I felt like I fought a good fight. I’m going to come back stronger. We’re going to work on a lot of things and get back in there.”

Earlier in the evening on SHOWTIME, undefeated heavyweight sensation Anthony Joshua successfully defended his IBF Heavyweight World Championship for the first time with a seventh round knockout of previously unbeaten American Dominic Breazeale at The O2 in London.  VIDEO: http://s.sho.com/28VGgsa

Below are quotes from Joshua after Saturday’s win on SHOWTIME BOXING INTERNATIONAL:

Many thought that Dominic Breazeale wouldn’t be able to stand up to your power and speed, but were you grateful for the opportunity to work a little bit more of your boxing skills?

“Well, it’s hard because you can see they’re hurt with every shot – well not every shot – but when you start catching them flush, they can feel the shots with these ten ounce gloves on. So, it’s just a matter of time, but in the process I didn’t want to be receiving any haymakers on the way back.

“It’s been tough I had two weeks off after my last fight, and got straight back in the gym so it was tough. I get a nice little break for once and then I can come back with recharged batteries.”

We know Deontay Wilder was watching the fight. Have you got a message for him, the WBC Champion?

“Unbelievable inspirational person. He was patient, 30-odd fights [and] got his hands on the WBC [belt]. I’m following suit. I’m making my way into the U.S. with SHOWTIME backing me as well. So, he watched that.

“He can pick up whatever he wants to pick up from that, but it’s so different when you’re in the ring with each other. So one day we’ll get to experience what each other’s about.”

Who do you want to fight next?

“Well I think it’s gonna have to be the likes of [Joseph] Parker. I was really looking at Fury… I hope he gets better soon. He hurt his ankle unfortunately, which has postponed it because  I was hoping to get that some time in the winter if everything went well July 9th like it did tonight, but we’re gonna have to reschedule that and in the meantime, we can look at other opponents like Parker, if he’s vacant, or anyone else that the people want.”

What do you think that you still need to work on?