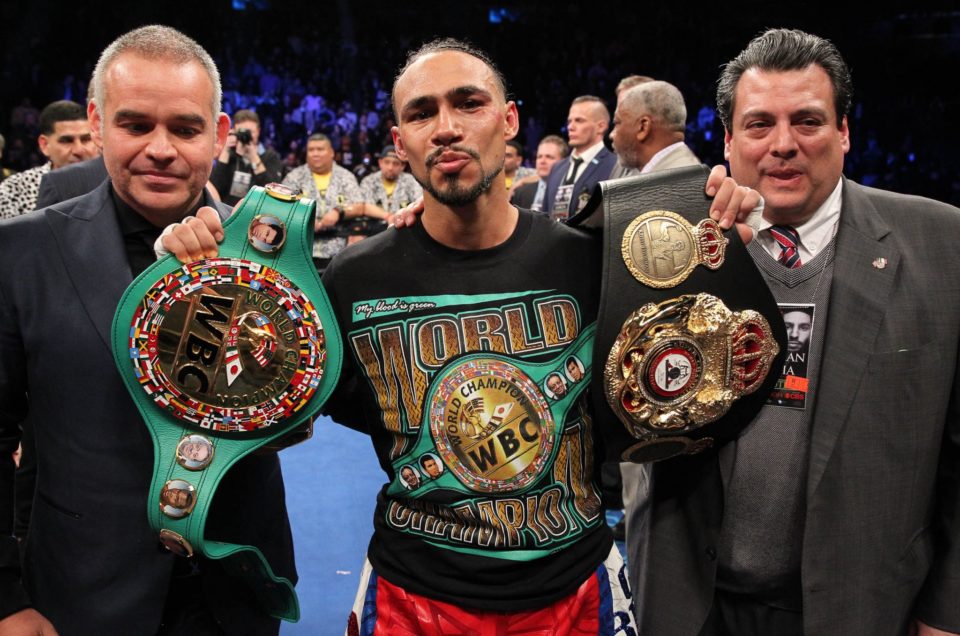 BROOKLYN (March 5, 2017) – Keith Thurman is the unified welterweight world champion.
Thurman (28-0, 22 KOs) unified boxing’s glamour division with a split-decision victory over Danny Garcia (33-1, 19 KOs) on Saturday, defending his WBA belt and picking up Garcia’s WBC crown on boxing’s biggest stage in primetime on CBS from Barclays Center, the home of BROOKLYN BOXING™.
The event, which was produced by SHOWTIME Sports® for the CBS Television Network, marked the highest-attended boxing event in Barclays Center history with 16,533 fans witnessing just the 10th unification in division history.
The close affair, which was only the third time undefeated fighters unified the 147-pound division, was scored 116-112 Thurman, 115-113 Thurman and 115-113 Garcia.
The SHOWTIME CHAMPIONSHIP BOXING on CBS main event, which was presented by Premier Boxing Champions, was a tale of effective aggression and ring generalship. Thurman came out swinging and was the busier and more accurate fighter in nine of the 12 rounds.  “One Time” Thurman was more tactical in the second half of the fight, utilizing lateral movement and working off his jab.  Garcia picked up the pace and was more active in the final rounds, but it was too little too late for the previously undefeated Philadelphia native.
“I thought I out-boxed him.” said Thurman, who likely earned a spot on boxing’s mythical pound-for-pound list with the impressive victory.  “I thought it was a clear victory, but Danny came to fight.  I knew when it was split and I had that wide spread, I knew it had to go to me.
“I was not giving the fight away. I felt like we had a nice lead, we could cool down.  I felt like we were controlling the three-minute intervals every round.  My defense was effective – he wasn’t landing.”
A former unified champion at 140-pound, Garcia was aiming to be the first fighter in history to unify titles at 140 and 147 pounds.
“I came up short tonight,” said Garcia, who entered the bout with a 7-0 record in world title bouts.  “I thought I was the aggressor.  I thought I pushed the pace.  But it didn’t go my way.
“I thought I won and I was pushing the fight.  But it is what it is. I’ll come back strong like a true champion. I would love a rematch to get these titles.”
SHOWTIME Sports analyst and unofficial scorer Steve Farhood scored the fight 116-112 for Thurman.
Undefeated super welterweight Erickson Lubin (18-0, 13 KOs) knocked out Jorge Cota (23-2, 20 KOs) in a WBC 154-pound title eliminator, dropping the previously once-beaten Cota with a flush overhand left at 1:25 (TKO) of the fourth round.
Lubin now becomes the No. 2 challenger to WBC Welterweight World Championship Jermell Charlo, who is due a mandatory bout against No. 1 contender Charles Hatley.
The Orlando-native Lubin landed 47 percent of his power shots across four rounds of shutout boxing.
“I baited him with the jab.  I knew he was going to come with the big shots early,” Lubin said to reporter Jim Gray.  “I put a few tricks on him, I landed that overhand and it was night-night.  I put my hands down to bait him in, I did a squat and then it was night-night.  I was ready to follow-up with a right but he was already out.”
At just 21-years-old, Lubin now has an opportunity to become the youngest world champion in boxing today.
“That would mean a lot to me; that would mean a lot to Orlando, Florida,” Lubin said.  “This is my second time knocking someone out in front of Ray Leonard.  He’s one of my favorite fighters of all time.  It’s an honor to do this on CBS.”
# # #
ABOUT THURMAN vs. GARCIA
Keith Thurman vs. Danny Garcia was a welterweight world title showdown between undefeated 147-pound titlists. The 12-round bout headlined SHOWTIME CHAMPIONSHIP BOXING on CBS, presented by Premier Boxing Champions, Saturday March 4 from Barclays Center, the home of BROOKLYN BOXING™. In the co-main event undefeated rising star Erickson Lubin battled once-beaten knockout artist Jorge Cota in a super welterweight title eliminator bout on CBS at 9 p.m. ET/6 p.m. PT.
For more information visit www.SHO.com/Sports follow on Twitter @SHOSports, @KeithFThurmanJr, @DannySwift, @LouDiBella, @BarclaysCenter and @Swanson_Comm or become a fan on Facebook at www.Facebook.com/SHOSports, www.Facebook.com/DiBellaEntertainment, www.Facebook.com/barclayscenter. PBC is sponsored by Corona, La Cerveza Mas Fina.
Website Admin