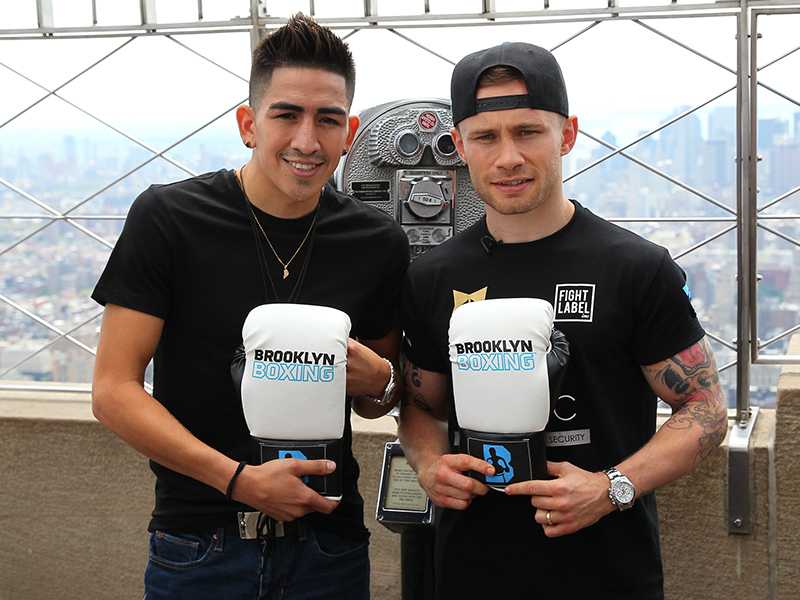 Tickets for the live event, which is promoted by DiBella Entertainment in association with Cyclone Promotions, start at $38 and go on sale tomorrow, June 15 at 10 a.m. Tickets can be purchased online by visiting www.ticketmaster.com, www.barclayscenter.com or by calling 1-800-745-3000. Tickets are also available at the American Express Box Office at Barclays Center. Group discounts are available by calling 844-BKLYN-GP.

Santa Cruz and Frampton collide in a battle of world champions who mix dizzying speed with incredible output that produces exciting fight after exciting fight. This fight will be the fifth featherweight world title fight presented by SHOWTIME in 2016. Frampton, a unified world champion at 122 pounds, a weight class Santa Cruz previously held a title at, will move up a notch in weight and challenge at 126 pounds.

“I’ve never been to New York before and I’m looking forward to this big opportunity to put on a show for new fans in a new city,” said Santa Cruz. “I always fight for the fans and I’m excited to be able to do that somewhere I haven’t been before. Frampton is a good fighter. He has power and skills and he moves when he has to, but he has a weak chin. When he gets caught with a good punch, he goes down. He doesn’t like pressure and I have that. I’m looking forward to putting on an exciting show at Barclays Center and I hope I leave with lots of new fans.”

“I am in terrific shape, I feel fantastic in the gym and I am ready for the biggest fight of my career,” said Frampton. “On July 30 I will become a two weight world champion. I respect Leo Santa Cruz, he is a great fighter and person, but I am preparing meticulously to overcome any challenge he brings on July 30. I cannot wait to hear the crowd at Barclays Center. It is my first time boxing in New York, where some of the greatest fights have taken place. I know there will be a large number of fans traveling from the UK and Ireland but there is also a huge Irish-American audience and I am eager to show them all what I can do. Get your tickets now, it’s going to be a great fight!”

“Santa Cruz vs. Frampton is not only the best fight that can be made in the featherweight division, it truly is one of the most anticipated fights in all of boxing,” said Lou DiBella, President of DiBella Entertainment. “Boxing fans can expect nonstop action in this can’t-miss matchup of aggressive styles. There’s no better way for Santa Cruz and Frampton to make their New York debuts than at Barclays Center, in Brooklyn, against each other.”

“The competitive matchup of Santa Cruz vs. Frampton shines an international spotlight on BROOKLYN BOXING at Barclays Center,” said Brett Yormark, CEO of Brooklyn Sports & Entertainment. “We’re especially excited to host two of the best featherweight boxers in the sport today as they fight in New York for the first time.”

The popular Mexican-American Santa Cruz fights out of Los Angeles and won the 126-pound title in a “Fight of the Year” candidate against former three-division champ Abner Mares last August at STAPLES Center in Los Angeles. It was just the third fight in the featherweight division for Santa Cruz, who has won belts at 118 and 122 pounds while earning a reputation as one of boxing’s most active and exciting fighters. The 27-year-old also holds victories over Cristian Mijares and Eric Morel. He has competed in world title bouts in 11 of his last 13 fights since 2012. After stopping former world champion Kiko Martinez in the fifth round last Feb. 27, Santa Cruz makes his second world title defense in his East Coast debut.

After defeating rival Scott Quigg in their 122-pound unification bout last Feb. 27, Frampton will attempt to capture a world title in a second weight class. Fighting out of Belfast, Northern Ireland, the Irish national amateur champion in 2005 and 2009 expects to bring some of his rabid fans stateside come July 30. The 29-year-old became a world champion in 2014 when he defeated Kiko Martinez to earn a super bantamweight title. He made his U.S. debut in July 2015 when he defeated Alejandro “Cobrita” Gonzalez Jr. in Texas before unifying the title against Quigg.