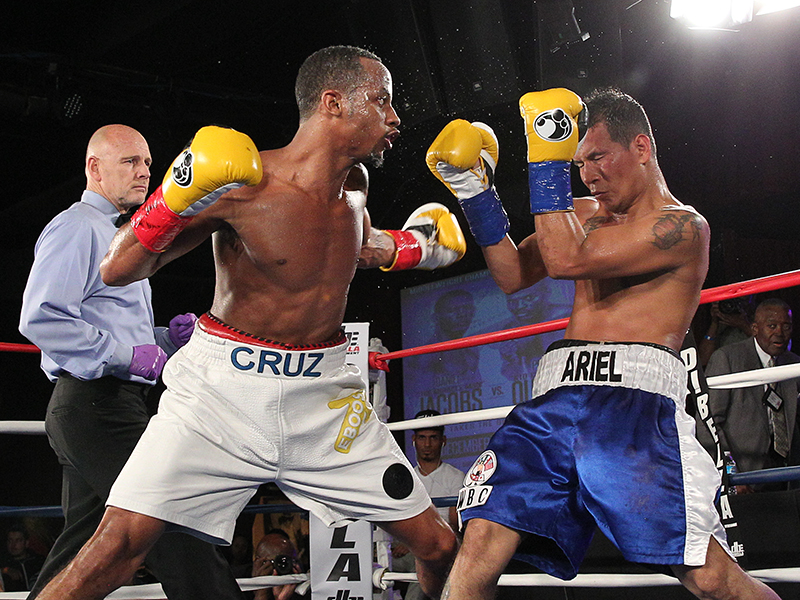 Now fully recovered, the 24-year-old Cruz, 139¾, impressively dispatched of southpaw Ariel Vazquez, 137½, Managua, Nicaragua, in the sixth of a scheduled eight-rounder. Cruz almost ended matters very early as the first jab he threw in the fight dropped Vazquez for a count. Vazquez arose but was soon felled again by a devastating counter right hook to the chin. Surviving the opening round, Vazquez was subsequently more mindful of his defense as the bout ensued. Cruz remained aggressive while getting in some much-needed rounds to shake off his ring rust. Vazquez was floored once more in the fourth frame by a right hand-left hook combination. In the round six, Cruz landed a blistering left hook that immediately bloodied and broke Vazquez’ nose. To his credit, Vazquez stayed on his feet but succumbed to the following attack from Cruz prompting a referee stoppage at 2:41 of the stanza. Cruz is now 11-0 (5 KOs), while Vazquez’ record dropped to 11-10-2 (8 KOs). As an amateur, Cruz was a New York Golden Gloves champion and after a second-place finish at the 2011 National Golden Gloves, he competed in the 2012 US Olympic Trials before turning pro later that same year.

(Photo Credit: Ed Diller/DiBella Entertainment)
Moving down to the junior middleweight division, Ukrainian southpaw Ivan Golub, 150½, co-promoted by DiBella Entertainment and Fight Promotions Inc., now living and training in Brooklyn, battled the experienced and crafty Kendal Mena, 150½, of San Cristobal, Dominican Republic, in a scheduled eight-round affair. Using a stiff jab to set up his powerful straight left, Golub followed up one of his lefts with a right hook upstairs to wobble Mena at the bell ending round one. The right hook continued to be a key weapon for Golub, as that punch felled Mena in the final minute of the second round. Another right hook staggered Mena in round three and a follow-up straight left snapped his head back forcing the referee to jump in to stop the bout at the 1:54 mark. The fast-rising Golub is now 9-0 (7 KOs), while Mena saw his ledger dip to 20-3 (11 KOs). Golub amassed an astonishing record of 270-32 during his amateur career. He became a five-time Ukrainian National champion, won bronze medals at the Junior World Championships in 2006 and at the World Championships in 2009. He also participated in the World Series of Boxing, winning all five of his bouts.
The always-exciting Peter Dobson, 150½, Bronx, engaged Tavorus Teague, 150, Paramount, CA, in a back-and-forth brawl that had the raucous crowd cheering on their feet for as long as it lasted. Dobson began by launching bombs at the outset, though the resolute Teague remained composed to land his own combinations upstairs as the first round was coming to a close. The following round was fought shoulder-to-shoulder amid several thrilling exchanges. While Teague had his moments in the third, it was clear that he was wearing down and his corner decided to not let their charge out for the fourth frame, resulting in a TKO victory for Dobson, now 6-0 (5 KOs). Teague’s record fell to 2-6-2 (1 KO).
Out of the ring for a year-and-a-half while he recovered from dental surgery, southpaw junior welterweight prospect Shemuel “The Chosen One” Pagan, 140, from Brooklyn, made an impressive return improving to 6-0 (3 KOs) with a first-round TKO over Lawton, Oklahoma’s David Nelson, 139¾, now 3-5 (1 KO). A right hook to the midsection quickly dropped Nelson and Pagan wisely went back to the body, landing in combination to bring his adversary to his knees for a second knockdown. Feeling Nelson was in no condition to continue, the referee halted the action at the 2:42 mark. As an amateur, Pagan was a five-time New York Golden Gloves champion as well as a 2008 Olympic team alternate.

(Photo Credit: Ed Diller/DiBella Entertainment)
Dominican amateur superstar Carlos Adames, 148, now living in Brooklyn and training out of the famed Gleason’s Gym, needed less than a full round to hand Rudy Lozano, 149½, his first defeat. Lozano came out swinging wildly while Adames patiently bided his time to strike. Backing Lozano into a corner, Adames unleashed several overhand rights to send his foe to the canvas. Lozano arose, but was met with a follow-up barrage from Adames that ended the bout at the 2:38 mark. Adames is now 4-0 (3 KOs), while Lozano dropped to 2-1-1.

The English/Irish Steed Woodall, 162½, now training under the tutelage of sage trainer Ronnie Shields, earned a fourth-round stoppage victory over Phoenix, Arizona’s Javier Loya, 161¼. After outworking the game Loya over the first two rounds, Woodall twice dropped in foe in the third. Continuing to press the action in the fourth, Woodall felled Loya a third time leading the referee to halt the contest just 38 seconds into the frame. Woodall’s record improved to 9-0-1 (6 KOs), while Loya’s fell to 7-4 (6 KOs). As an amateur, Woodall was a five-time English National champion and a two-time British champion, having accrued a 41-5 record along the way. He then relocated to the US in 2014 and turned pro in March of that year.

Among the luminaries in attendance this evening were middleweight champion Daniel Jacobs and former middleweight champion Peter Quillin coming face to face in the ring ahead of their December 5th showdown at Barclays Center, in Brooklyn, NY. Tickets for Jacobs-Quillin, promoted by DiBella Entertainment, start at $50, not including applicable fees, and are on sale now. Tickets can be purchased online by visiting www.ticketmaster.com, www.barclayscenter.com, or by calling 1-800-745-3000. Tickets will also be available at the American Express Box Office at Barclays Center.