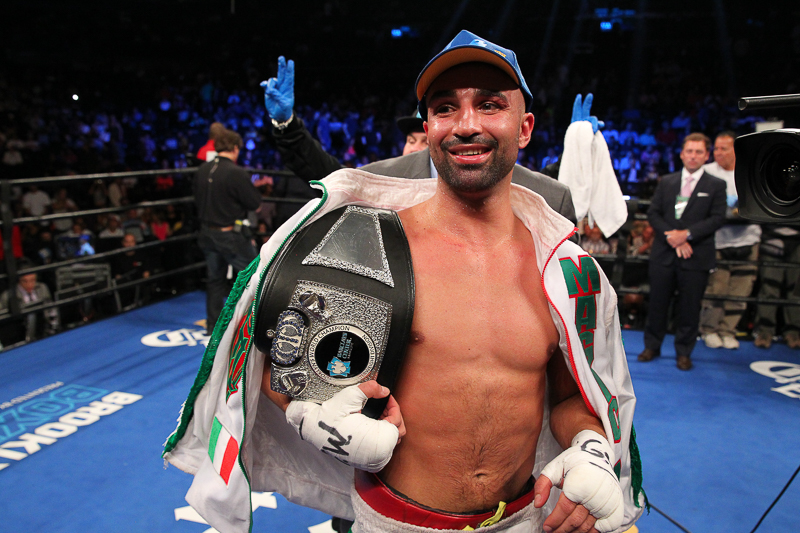 BROOKLYN (July 13, 2016) – Former two-division world champion Paulie Malignaggi is set to defend Brooklyn’s World Championship Belt in a 10-round welterweight showdown after being challenged on Twitter this afternoon by fellow Brooklyn-native Gabriel Bracero on Saturday, July 30 live on SHOWTIME EXTREME.
Malignaggi earned the title of “King of Brooklyn” when he defeated another Brooklyn-born star in former world champion Zab Judah in December of 2013 at Barclays Center. This version of the “Battle for Brooklyn” will once again have local bragging rights on the line, with both men looking to impress in front of a hometown crowd.
“Representing Brooklyn with this belt has been something I’m very proud of,” said Malignaggi. “I relish the competitive spirit of being able to defend it against another quality Brooklyn fighter like Gabriel Bracero. I fight for Brooklyn and I represent Brooklyn with everything I’ve got each time I step into the ring and on July 30 it will be no different.”
“This fight is going to have two Brooklynites, finally meeting inside the ring, in a really exciting matchup,” said Bracero. “What better way to highlight that, then having the Brooklyn’s World Championship Belt on the line. Growing up in Brooklyn is what has made me the man and the fighter that I am today. I respect Paulie for giving me this opportunity, for putting his belt on the line and everything he’s done in his career. On July 30 though, that belt is coming home with me. I will be the new champion of Brooklyn.”
Click HERE for video of Bracero’s challenge and HERE for video of Malignaggi’s response
Tickets for the live event, which is promoted by DiBella Entertainment in association with Cyclone Promotions and presented by Premier Boxing Champions, start at $38 and can be purchased online by visiting www.ticketmaster.com, www.barclayscenter.com or by calling 1-800-745-3000. Tickets are also available at the American Express Box Office at Barclays Center. Group discounts are available by calling 844-BKLYN-GP.
“Malignaggi-Bracero figures not only to be a highly competitive fight, but is truly a battle of Brooklyn,” said Lou DiBella, President of DiBella Entertainment. “Paulie has had a fantastic career, but this is a dangerous matchup for him against a tough fighter.”
“There’s nothing more fitting than two Brooklyn fighters, Paulie, of Bensonhurst, and Gabriel, of Sunset Park, standing toe-to-toe in the ring at Barclays Center,” said Brett Yormark, CEO of Brooklyn Sports & Entertainment. “Paulie holds the title of Brooklyn’s World Champion. On July 30, his belt is on the line. Who’s going to take it?”
The July 30 event features a SHOWTIME CHAMPIONSHIP BOXING headlined by a featherweight world title clash between Leo Santa Cruz and Carl Frampton. Coverage begins live on SHOWTIME at 9 p.m. ET/6 p.m. PT and features former two-division world champion Mikey Garcia returning to the ring to take on former champion Elio Rojas plus 154-pound contenders Tony Harrison and Sergey Rabchenko in a world title-eliminator. Lightweight sluggers Ivan Redkachand Tevin Farmer will also battle in televised action on SHOWTIME EXTREME.
A former world champion at 140 and 147-pounds, the 35-year-old Malignaggi (35-7, 7 KOs) will return to the ring to fight at Barclays Center for the fifth time. He has faced a slew of big names throughout his career and has been victorious over the likes of Judah, Vyacheslav Senchenko and Pablo Cesar Cano. Born and raised in the Bensonhurst neighborhood of Brooklyn, “The Magic Man” was victorious twice fighting in his birth country of Italy last year after unsuccessfully challenging unbeaten Danny Garcia in August.
Another Brooklyn-native, Bracero (24-2, 5 KOs) comes off of a sensational one-punch knockout of rival Danny O’Connorin their rematch last October. The 35-year-old owns victories over Dmitry Salita and Pavel Miranda in addition to his first triumph over the previously unbeaten O’Connor in 2011.
# # #
For more information visit www.SHO.com/Sports follow on Twitter @SHOSports, @LeoSantaCruz2, @RealCFrampton, @BarclaysCenter, and @Swanson_Comm or become a fan on Facebook atwww.Facebook.com/SHOSports, www.Facebook.com/DiBellaEntertainment, www.Facebook.com/barclayscenter.PBC is sponsored by Corona, La Cerveza Mas Fina.
ABOUT BROOKLYN BOXING™
Upon opening in 2012, Barclays Center brought major championship boxing back to Brooklyn after more than 50 years. Over the past four years, the BROOKLYN BOXING platform has hosted more than 120 bouts and more than 20 world title fights while giving local fighters their own shot in the spotlight. In April 2016, BROOKLYN BOXING extended its brand by creating an active wear and lifestyle apparel line that is available at www.BrooklynBoxingShop.com. BROOKLYN BOXING is proudly presented by AARP.
CONTACTS:
Swanson Communications: (202) 783-5500
DiBella Entertainment: (212) 947-2577
Chris DeBlasio, Showtime Networks Inc.: (212) 708-1633
Matt Donovan, Showtime Networks Inc.: (212) 708-1663
Flo Jocou, Showtime Networks Inc.: (212) 708-7319
John Beyrooty BZA/SHOWTIME: (562) 233-7477
John Cirillo/Cirillo World/Team Frampton, (914) 260-7436
Barry Baum, Barclays Center: (718) 942-9533
Credentials: www.magnamedia.com
Website Admin