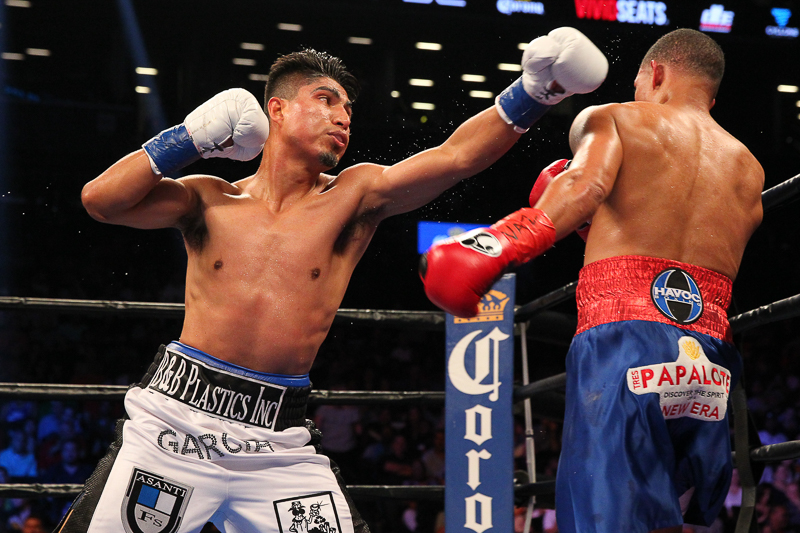 BROOKLYN (June 28, 2016)—Undefeated former two-division world champion Mikey Garcia will return to the ring after a two-and-a-half-year layoff on Saturday, July 30 on an exciting night of boxing on SHOWTIME and SHOWTIME EXTREME that is one of the strongest cards ever assembled at Barclays Center in Brooklyn.

Garcia, who won world titles at featherweight and super featherweight, will fight former world champion Elio Rojas in a 10-round bout in the SHOWTIME CHAMPIONSHIP BOXING co-feature of the Leo Santa Cruz vs. Carl Frampton event presented by Premier Boxing Champions (PBC).

In the opening bout of the SHOWTIME CHAMPIONSHIP BOXING telecast that begins at 9 p.m. ET/6 p.m. PT, once-beaten 154-pound contenders Tony Harrison and Sergey Rabchenko will meet in a 12-round IBF Junior Middleweight Eliminator.  Harrison and Rabchenko will square off for the No. 2 mandatory challenger spot to IBF titlist Jermall Charlo, who successfully defended his crown on May 21, and undefeated contender Julian Williams, who earned the No. 1 mandatory position on March 5, both on SHOWTIME.  Harrison vs. Rabchenko is the sixth matchup in 2016 between top 154-pound fighters, a lineup showcasing three world title fights and three title elimination matches in one of boxing’s deepest divisions.

The combined record of the six fighters on the SHOWTIME telecast is an impressive 162-4-1 with 113 knockouts.

An all-Brooklyn showdown between welterweight technicians Paulie “Magic Man” Malignaggi and Gabriel “Tito” Bracero highlights the undercard action on SHOWTIME BOXING on SHOWTIME EXTREME.  The 10-round bout is a matchup between a former two-division world champion, Malignaggi, and a fellow Brooklyn native, Bracero, coming off the biggest win of his career when he knocked out Danny O’Connor last October.

A 10-round clash between once-beaten lightweight Ivan Redkach and streaking Tevin Farmer, a winner of 14 straight, will open the SHOWTIME EXTREME telecast live at 7 p.m. ET/PT.

The July 30 event at Barclays Center comes on the heels of last Saturday’s potential Fight of the Year thriller between Keith Thurman and Shawn Porter, a back-and-forth slugfest that generated the top grossing live gate and second-highest attended boxing event in venue history.

“This is the strongest card from top to bottom that I have promoted at Barclays Center,” said DiBella Entertainment President Lou DiBella.  “Every single fight is significant and competitive, and this is a great follow up from the tremendous success that boxing had with Thurman-Porter this past weekend.”

“This will be our 19th boxing event, but from top to bottom it’s arguably our best card yet,” said Brooklyn Sports & Entertainment CEO Brett Yormark. “We are excited to welcome undefeated Santa Cruz and Frampton to Brooklyn for the first time, a fight that could rival Barclays Center’s epic Thurman-Porter bout for Fight of the Year.  It’s also a pleasure to welcome Brooklyn’s own Paulie Malignaggi back to Barclays Center for the fifth time and to host the return of Mikey Garcia after a two and a half year hiatus. July 30 is going to be another big night for BROOKLYN BOXING.”

“We are excited to be part of Mikey Garcia’s return to the ring.  Before the layoff, he was a two-division world champion and considered one of the top boxers in the world. We know he is determined to reclaim his place among the elite,” said Stephen Espinoza, Executive Vice President & General Manager, SHOWTIME Sports.  “SHOWTIME has distinguished itself by delivering the most compelling matchups and the most important events in boxing all year long.  There is no other network as committed to the sport, and the July 30 event, from top-to-bottom, is a prime example.”

“I expect to pick up right where I left off,” Garcia told SHOWTIME Sports reporter Jim Gray last Saturday on CBS.  “I was a world champion, I was undefeated, and I still am.  I didn’t leave because I was injured.  I think I’ll come back even better.  I’m hungrier now than I was before.

“I just have to get one fight in.  This first fight with Elio (Rojas) will be somewhere between 135 and 140 pounds, but I want to fight at 135 and win a title there.  I want to win a title there and keep going after champion after champion.  Now that all that (uncertainty) is behind me I look forward to the next stage of my career.  This next stage of my career will be what people remember me for.”

“Mikey Garcia is a great fighter,” Rojas said. “I want to thank him for this opportunity.  We are both former WBC World Champions and I expect a great fight.  However, all of the talk surrounding this fight has been about Mikey’s comeback and his future plans.  I am no tune-up. This is also about me coming back and fighting again.  He may be looking past me, but I am fully focused on him and securing the victory.  I will do whatever I have to do to win, so I can move on and regain my world championship.”

Garcia (34-0, 28 KOs), of Ventura, Calif., is 28-years-old and in the prime of his career.  Once considered one of the top young boxers pound-for-pound in the world, he will make his first ring appearance since he retained the WBO 130-pound title with a 12-round unanimous decision over Juan Carlos Burgos on Jan. 25, 2014.  Garcia, the brother of renowned trainer Robert Garcia, has been victorious by knockout in 10 of his last 12 fights and holds impressive victories over Roman “Rocky” Martinez, Juan Manuel Lopez, Orlando Salido and Bernabe Concepcion.

Rojas (24-2, 14 KOs), of San Francisco de Macoris, Dominican Republic, won the WBC featherweight world championship in 2009 with a 12-round unanimous decision over defending titleholder Takahiro Ao in Japan.  The 33-year-old successfully defended the title against Guty Espadas Jr. in 2010, before losing the belt via unanimous decision to Jhonny Gonzalez in April 2012.  Since the loss to Gonzalez, Rojas moved up to lightweight, where he defeated Robert Osiobe in August 2014.

“I’m thrilled to return to the ring on this big stage for my first fight in Brooklyn, and I’m ready to put on a show,” said Harrison. “Fighting for a world title is my dream and I know that I have a challenge in front of me. I’m working hard in camp to get another knockout and to make my mark on the division.”

“This is the start of realizing my dream,” Rabchenko said.  “America is the Mecca of boxing so it is a huge privilege for me to be asked to fight there. American fans like to see knockouts and I like to knock people out so I think they will like what they see. I think I can build a fan base there.  I am hungrier than ever. I have not seen much of Harrison, but I am ready for anyone. People say he is a very good fighter with good power. I’m not worried. I have good power as well and I think I will have too much for him.”

At just 25-years-old, Harrison (23-1, 19 KOs) has showed tremendous promise. He manufactured a 10-fight knockout streak from 2013 to 2015 and proved he could recover from a loss when he dominated Cecil McCalla for 10 rounds in October 2015 and stopped Fernando Guerrero in impressive fashion in March.

Fighting out of Belaraus, Rabchenko (27-1, 20 KOs) is looking to put himself squarely into world title contention when he makes his U.S. debut on July 30. The 30-year-old is coming off  stoppage victories over Walter Calvo in May 2015 and Miguel Aguilar in February.

“I feel truly blessed to have yet another opportunity to fight in Brooklyn,” Malignaggi said.  “I have known Tito a long time and I know he always comes to fight.  We will give the Brooklyn fans a great appetizer before the terrific main event later that night in Barclays Center.”

“I’m looking to make a statement by winning this fight,” said Bracero. “Paulie and I have been friends since the amateurs and I’m thankful to have this opportunity, but he’s had his run. Now it’s time for me to have mine. This fight is going to change my life.”

A former world champion at 140 and 147-pounds, the 35-year-old Malignaggi (35-7, 7 KOs) will return to the ring to fight at Barclays Center for the fifth time. He has faced a slew of big names throughout his career and has been victorious over the likes of Zab Judah, Vyacheslav Senchenko and Pablo Cesar Cano. Born and raised in the Bensonhurst neighborhood of Brooklyn, “The Magic Man” was victorious twice fighting in his birth country of Italy last year after unsuccessfully challenging unbeaten Danny Garcia in August.

Another Brooklyn-native, Bracero (24-2, 5 KOs) comes off of a sensational one-punch knockout of rival Danny O’Connor in their rematch last October. The 35-year-old owns victories over Dmitry Salita and Pavel Miranda in addition to his first triumph over the previously unbeaten O’Connor in 2011.

“I am extremely happy to be back in the ring on a big show in New York,” Redkach said.  “There are so many Ukrainian fans in New York and I am thrilled to have their support and will put on a great show for them. I want to thank Leo Santa Cruz and his team for having me in their camp as we both prepare ourselves to put on tremendous performances come July 30.”

“I couldn’t be more excited about this fight,” Farmer said.  “This is my Barclays Center debut and it is going to be a spectacular performance.  I have called out anyone and everyone in the 130- pound division to no avail, so now I’m moving up to 135 to take on Redkach, one of the most feared punchers in the division. Redkach is an aggressive guy and I know he is coming to fight, but there is no way I leave that ring without my hand being raised.  This is a fight where I can and I will make a major statement.  I’m willing to fight whoever they put in front of me to inch closer to a world title opportunity and July 30 is another step in that direction.  I tip my hat off to Redkach for giving me this fight, but this is my time to shine.”

Born in Ukraine but fighting out of Los Angeles, Redkach (19-1-1, 15 KOs) began boxing at the age of six and has put together an impressive career since turning pro in 2009. The 30-year-old owns victories over Tony Luis, Sergey Gulyakevich and Yakubu Amidu. Most recently, Redkach knocked out Erick Daniel Martinez in October 2015 and fought to a draw with Luis Cruz in April.

Representing the fighting city of Philadelphia, Farmer (24-1-1, 5 KOs) has won 14 bouts in a row since losing to unbeaten world champion Jose Pedraza in 2012. The 25-year-old has come on strong in recent years, upsetting previously unbeaten fighters such as Emmanuel Gonzalez, Angel Luna and Camilo Perez. Farmer dominated veteran Gamaliel Diaz in March and will make his Barclays Center debut on July 30.

Tickets for the live event, which is promoted by DiBella Entertainment in association with Cyclone Promotions, start at $38 and can be purchased online by visiting www.ticketmaster.com, www.barclayscenter.com or by calling 1-800-745-3000. Tickets are also available at the American Express Box Office at Barclays Center. Group discounts are available by calling 844-BKLYN-GP.