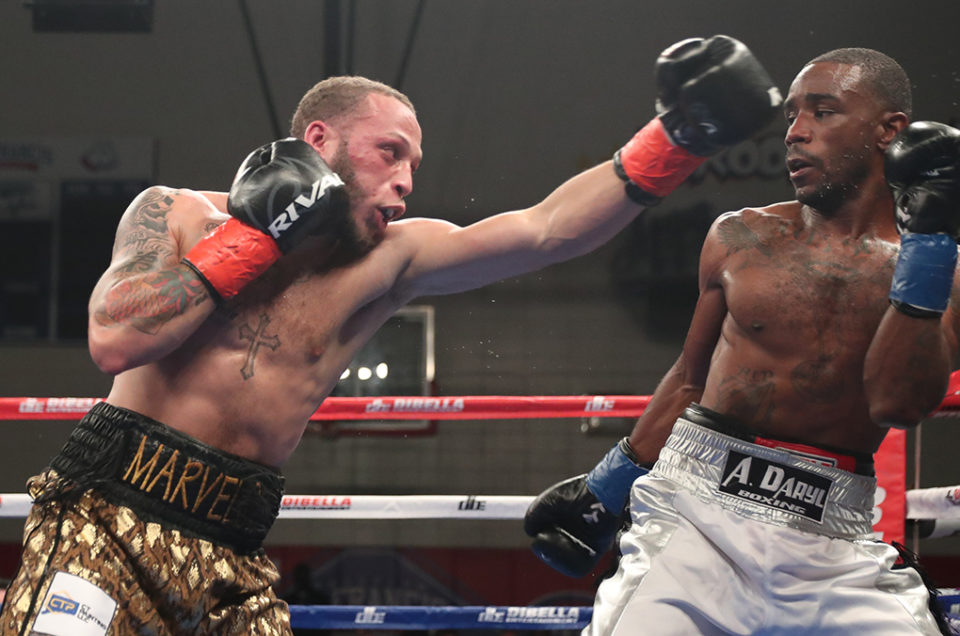 The night included a special tribute and memorial 10-count in honor of Patrick Day, who tragically passed away on October 16, succumbing to the traumatic brain injury he suffered in his fight held in Chicago, IL.

The event also participated in a charitable cause, as a portion of each ticket sold went toward St. Francis College’s Robert J. McGuire Scholarship, which is part of the school’s mission to encourage and educate first generation college students.

“Marvelous” Mykquan Williams, 139.2 lbs., of East Hartford, CT, headlined the card in his second trip as a pro to New York City, facing dangerous veteran Tre’Sean Wiggins, 139.4 lbs., of Johnstown, PA. What transpired turned out to be Williams’ toughest test in the 21-year-old’s young career, providing many thrills and ebbs and flows that had the boisterous crowd on their feet for much of the contest. The southpaw Wiggins, who held a five-inch height advantage, had the upper hand for the first six minutes of action, with Williams working to get on the inside. In the fourth round, Williams closed the gap to dish out a feverish attack to the body that visibly bothered his foe. Williams also found a home for his powerful left hook upstairs, which became a key weapon of his as the rounds went by. A huge left hook stunned Wiggins in the fifth and “Marvelous” Mykquan took advantage of the moment with a follow-up barrage. Wiggins recouped and pumped his jab to fire straight lefts over the next two rounds as Williams pressed forward. Williams twice staggered Wiggins with left hooks to the head in the seventh stanza. Both fighters had success in the eighth and final frame, with Williams again digging to the body. What appeared to be a close-but-clear victory for the East Hartford resident ended in a controversial majority draw, with a 77-75 tally for Williams overruled by two 76-76 scorecards. Defending his WBC USNBC super lightweight title for the first time, Williams’ record was extended to 15-0-1 (7 KOs). Managed by Jackie Kallen, Williams is trained out of Manchester Ring of Champions Society boxing gym in Connecticut by Paul Cichon. Fighting to the third draw of his career, Wiggins is now 11-4-3 (6 KOs).

Heavyweight prospect George Arias, 241.2 lbs., of The Bronx, NY, began the co-main event against Gabriel Hernandez, 225.4 lbs., of San Diego, CA, boxing on his toes and firing a consistent jab. However, by the midway point, both boxers stood shoulder-to-shoulder and banged away at each other for the remaining rounds in an exciting battle. Arias primarily focused on his foe’s ample midsection and Hernandez’s best weapon was his overhand right. After eight rounds, Arias improved to 15-0 (7 KOs) via unanimous decision with tallies of 80-72, 79-73, and 77-75, while Hernandez, now 10-1 (9 KOs), suffered his first defeat.

Jose Roman, 150.2 lbs., of Bayamon, Puerto Rico, controlled the action with deft footwork and a stiff jab against Tanzanian Fabian Lyimo, 151.6 lbs., based in Silver Spring, MD. Whenever Lyimo tried to get on the inside, he was met with a jab-straight right combination to the chin. In the third, Roman targeted the body with left and right hooks. As Lyimo was absorbing a great deal of punishment, the referee halted the action at the 0:57 mark of the fifth frame. With the TKO victory, Roman upped his record to 10-0 (5 KOs), while Lyimo dropped to 23-11-2 (15 KOs). Roman turned pro in September 2016 and was a three-time member of the Puerto Rican National Boxing team as an amateur.

Super featherweight contender Tiara Brown, 129.6 lbs., of Washington, D.C., defended her WBO NABO title for the first time, winning a majority decision against a game Vanessa Bradford, 128.2 lbs., of Edmonton, Canada. A full-time police officer in Washington D.C., where she was named the 2019 Police Office of the Year by the Metropolitan Police Department of D.C., Brown bobbed and weaved her way inside, applying pressure and landing in combination against Bradford with speed, power and precision. Whether it was by left hooks upstairs or right hooks to the body, Brown worked to counter Bradford’s aggression. The Canadian’s offense kept the eight-round fight competitive, which resulted in one judge scoring the contest a draw. That scorecard was overruled by tallies of 79-73 and 77-75 in favor of Brown, now 9-0 (6 KOs). Bradford is now 5-2-2.

Jude “King Zar” Franklin, 128.4 lbs., of Brooklyn, NY, patiently stalked Jayron Santiago, 128.8 lbs., of Bayamon, Puerto Rico, searching for openings to land punches with bad intentions. Santiago was rocked near the end of round two with an overhand right-left hook to the body combination. In the sixth stanza, Franklin landed cracking left hooks and overhand rights with intensity. While standing toe-to-toe with Santiago, Franklin clipped his adversary with right uppercuts. To his credit, Santiago weathered the storm and fired back to hear the final bell. With scores of 59-55, and 58-56 twice, Franklin improved to 10-0-1 (8 KOs) with the unanimous decision victory, while Santiago’s record evened out at 6-6-1 (4 KOs). Before turning pro in February 2016, Franklin accumulated a 60-11 amateur record and won gold medals at the NY Metros Tournament, twice at the Bergen County Tournament, Battle of the Tri-State Tournament and at the Trinidad and Tobago National Championships, as well as a silver medal at the 2014 Junior Olympics.

As Khalid Twaiti, 121 lbs., of Brooklyn, NY, planted sharp jabs to the midsection, Jose Alfredo Flores Chanez, 117.8 lbs., of Tijuana, Mexico, quickly resorted to flailing wild haymakers in round one. In the second, Twaiti looked to cut off the ring and land in combination with his foe trapped against the ropes. Twaiti kept the proper distance throughout to keep Flores at bay and measure his straight right hand upstairs. Whenever Flores made it past Twaiti’s jab, the Brooklynite unleashed blistering flurries of punches. Going the six-round distance for the first time, Twaiti improved to 6-0 (3 KOs) with a shutout victory on three tallies of 60-54. Flores’ record dipped to 7-11 (4 KOs). Trained by Don Saxby out of Gleason’s Gym, Twaiti turned pro in February 2017 after compiling a 74-15 amateur record.

In an entertaining scrap, Ariel Lopez, 119.6 lbs., of Brooklyn, NY, let Victor Trejo Garcia, 118.8 lbs., of Tlalnepantla, Mexico, take the lead and focused on counter shots early. Lopez had the heavier artillery, but the game Trejo Garcia answered almost every punch with a flurry of his own. In the last round, a cut was opened over Lopez’ left eye. After six rounds, the scorecards read 59-55 Lopez, 60-54 Trejo Garcia, and 57-57, ending in a draw. Lopez remained unbeaten at 13-0-1 (8 KOs) and Trejo Garcia is now 17-11-2 (8 KOs).