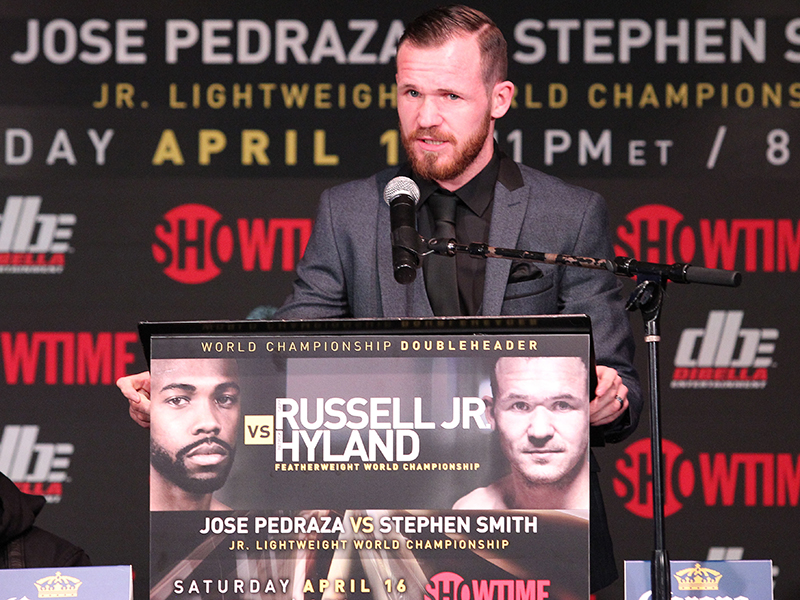 Russell-Hyland, Pedraza-Smith Twin World Title Fights
Saturday, April 16 Live On SHOWTIME®
MASHANTUCKET, Conn. (April 4, 2016) – Always tough Patrick “Punisher” Hyland (31-1, 15 KOs) will be fighting for Irish boxing history Saturday, April 16 as he challenges WBC Featherweight World Champion Gary Russell Jr. (26-1, 15 KOs) in the 12-round main event, airing live on SHOWTIME from Foxwoods Resort Casino in Mashantucket, CT.
The SHOWTIME CHAMPIONSHIP BOXING® telecast kicks off at 11 p.m. ET/8 p.m. PT with undefeated IBF Super Lightweight World Champion Jose “Sniper” Pedraza (21-0, 12 KOs), of Cidra, Puerto Rico, defending against mandatory challenger Stephen “Swifty” Smith (23-1, 13 KOs), fighting out of the United Kingdom.
Hyland is on the verge of joining a pair of exclusive Irish boxing clubs. The 32-year-old from Dublin is attempting to become the first Irishman to be world featherweight champion in 30 years, since Hall-of-Famer Barry “The Clones Cyclone” McGuigan, in addition to being only the second Irishman – Wayne “The Pocket Rocket” McCullough stands alone right now– to ever wear the coveted green WBC world title belt.
McGuigan (32-3, 28 KOs), fighting out of Clones, captured the WBA Featherweight Title in 1985, taking a 12-round decision from Eusebio Pedroza, and he successfully defended his crown twice against Bernard Taylor and Danilio Cabrera before losing by decision to Steve Cruz in 1986.
The only other Ireland-born world featherweight titlist was Dave Sullivan (27-12-7, 18 KOs), who was born in Knocknanaff, County Cork, Ireland, but fought professionally out of Boston, Mass. In 1898, Sullivan stopped Solly Smith in the fifth round to become world featherweight champion.
Belfast, Northern Ireland-product McCullough (27-7, 18 KOs), who was the WBC Bantamweight Champion in 1995-97, is the lone Irishman to ever be WBC World Champion in any weight class.
“Just to be fighting for this title is an honor for me and to challenge a great champion in Gary Russell, Jr. is also an honor,” Hyland said from his training camp at Celtic Warrior Gym in Dublin. “To join great Irish boxing names is a dream come true for me. It will also mean the world to me to win this belt for my and family and, most importantly, for my (late) dad, for all the hard work he put into me and my two brothers since I was eight years old.  To look up and say, ‘Dad, we did it,’ will be the best feeling in the world.”
Hyland has fought 10 times in the United States, including a 12-round loss to interim WBA featherweight champion Javier Fortuna in 2012.  Hyland lived in Marlboro, New York for a few years when he was promoted by a company headed by thenreality television star Nicole “Snooki” Polizzi.
“I love fighting in the United States,” Hyland added. “There’s always a great atmosphere at fights there and the US is the real home of boxing.  Snooki Boxing didn’t work out as planned, but they did a great job getting me the WBA title shot which was a great achievement in their first year in boxing. Unfortunately, things didn’t work out after that fight, but I do have great respect for them. I met friends for life from Marlboro who I consider family and they’ll be at my fight as always.”
Tickets for the live event, which is promoted by DiBella Entertainment, are priced at $150, $90 and $45, not including applicable service charges and taxes and are on sale now. Tickets are available at www.ticketmaster.com and www.foxwoods.com or by visiting the Foxwoods’ Box Office. To charge by phone, call Ticketmaster at (800) 745-3000. The Pedraza vs. Smith bout is promoted in association with Gary Shaw Productions, Universal Promotions and Matchroom Boxing.
For more information, visit www.SHO.com/Sports, follow on Twitter @SHOSports, @MrGaryRussellJr, @PajPunisher, @Sniper_Pedraza, @SwiftySmith, @LouDiBella, @FoxwoodsCT and @Swanson_Comm or become a fan on Facebook at www.Facebook.com/SHOSports, and www.Facebook.com/DiBellaEntertainment.
# # #
CONTACTS:
Swanson Communications: (202) 783-5500
DiBella Entertainment: (212) 947-2577
Chris DeBlasio, Showtime Networks Inc.: (212) 708-1633
Matt Donovan, Showtime Networks Inc.: (212) 708-1663
Flo Jocou, Showtime Networks Inc.: (212) 708-7319
John Beyrooty BZA/SHOWTIME: (562) 233-7477
Lori Potter, Foxwoods Resort Casino: (860) 396-6572
Credentials:  www.magnamedia.com
Website Admin