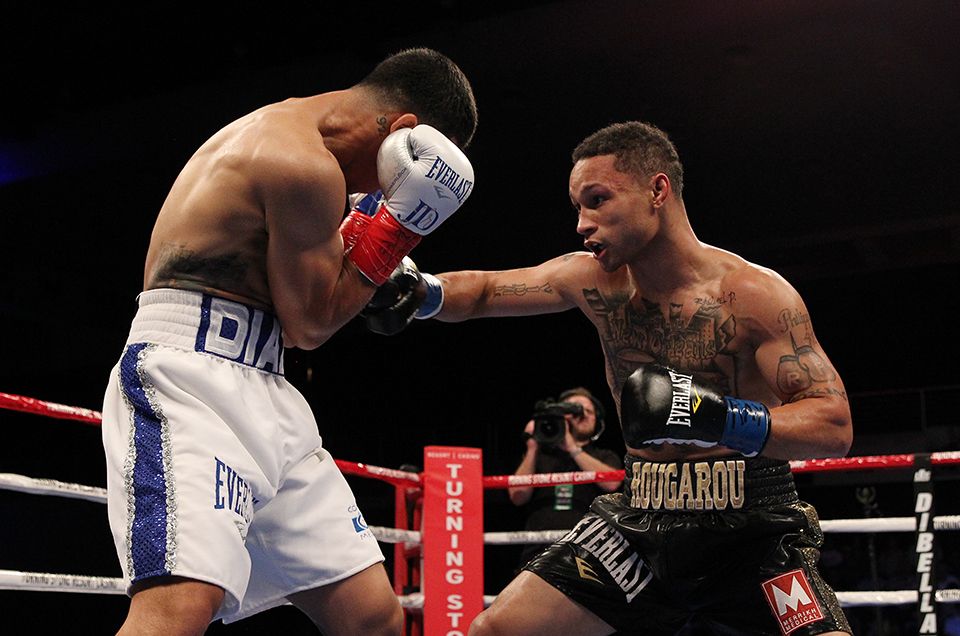 An Encore Presentation Of Friday’s Tripleheader Will Air Monday At 10 p.m. ET/PT On SHOWTIME EXTREME® 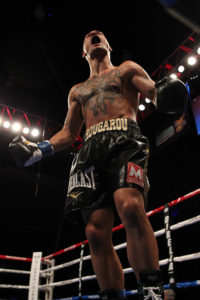 VERONA, N.Y. (June 10, 2017) – Undefeated super lightweight Regis Prograis made an emphatic statement Friday on ShoBox: The New Generation, knocking down previously undefeated Joel Diaz Jr. four times in the second round as he stamped his arrival as a legitimate contender in the 140-pound division.

The southpaw Prograis (20-0, 17 KOs), who was making his fourth start on the prospect developmental series, called out the top names at 140 after the second round demolition (TKO 2:55) at Turning Stone Resort Casino in Verona, N.Y.

The special Hall of Fame edition of ShoBox: The New Generation featured four members of the International Boxing Hall of Fame: ShoBox mainstays Barry Tompkins and Steve Farhood and special guests Al Bernstein and Jimmy Lennon Jr.  Tompkins and Farhood will be inducted just down the road in Canastota on Sunday in a 2017 class headlined by boxing greats Evander Holyfield, Marco Antonio Barrera and Johnny Tapia.

The super lightweights, Prograis and Diaz, entered the main event with a combined record of 42-0, but it was clear they were in a different class after the first round.  Prograis knocked down Diaz in the opening 30 seconds of the second in an exchange that appeared to be the result of a clash of feet.  Regardless, Prograis smelled blood and pounced on Diaz, flooring him again with a straight left midway through the round. 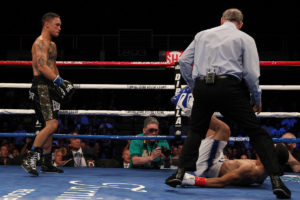 with a straight left.  The fourth and final knockdown, courtesy of a left hook, sent Diaz (23-1, 19 KOs) tumbling back and was enough for referee Mark Nelson to halt the bout with just seconds left on the clock.

It was a convincing statement for Prograis, who landed 62 percent of his power shots in the toughest test of his career.

“Tonight I proved I graduated from ShoBox,” Prograis said.  “I’m ready for the bigger stage. I’m ready for the big show.  I want to fight best the best in the division.  I want (Terrance) Crawford, (Victor) Postol, (Adrien) Broner.  I want them all.  None of these guys have fought anybody like me.  The boogeyman is coming.  They better get ready.

“He was tough, he was strong and hit hard, but I went through it.  That’s another opponent I ran through.  I run through everybody.  I’m ready for my shot.  I’m coming for everybody at 140.”

Diaz, who became the 164th fighter to suffer his first defeat on the series, was clearly disappointed with his game plan.

“I should have used my jab a bit more to knock him down but I came out swinging.” 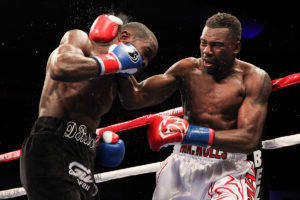 Rolls got off to a quick start, flooring Nicholson with a left hook in the closing seconds of the first to pocket a 10-8 round.  He came out attacking to sweep the second, but the fight appeared to change course in the third when Nicholson hurt Rolls in the final minute with his first meaningful punch of the fight.

Nicholson (17-2-1, 16 KOs) carried the momentum to sweep the fourth, but the remaining four rounds featured back-and-forth action and were difficult to score.  Rolls (16-0, 9 KOs) was the slightly busier fighter, connecting on 412 total punches compared to 390 over eight rounds, but Nicholson edged his opponent 134-117 in total connects.

ShoBox announcers Tompkins, Farhood and Raul Marquez all had Nicholson winning the final six rounds and edging Rolls 77-74 on their unofficial scorecards.

“What made the difference for me tonight was my jab, my patience, my overall boxing ability,” Rolls said.  “I came in to this fight having no doubts.  Nicholson was talking beforehand about my last fight, he was talking about my footwork, and I knew he was going to be in for a big surprise. I adapt for each fight. 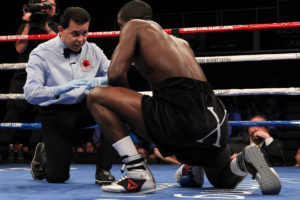 “I knew I had him from the first round.  My corner calmed me down and told me to take my time.”

Nicholson, who has mostly competed at 160 pounds, disagreed with the judges’ decision.

“I’m not going to make any excuses.  He won the fight,” Nicholson said.  “That’s what the judges saw, but I don’t agree.  He hurtme in the first round.  He hit me viciously in the head.  I was dizzy but I recovered and I went on.  I think I did a very good job but clearly not enough.

In the opening bout of the telecast, undefeated lightweight prospect Jon Fernandez scored a brutal knockout of Juan Reyes at 2:36 of the second round. 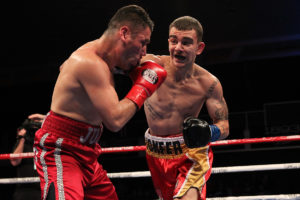 Fernandez stepped on the gas from the opening bell, utilizing superior activity and accuracy to pick apart the game yet outmatched Reyes.  The pair combined to throw 240 punches in the opening stanza but Fernandez landed his right at will and was clearly the more effective fighter.

The Sergio Martinez protégé had a bloodied Reyes hurt in the opening minute of the second and closed the show in the final minute with a sharp right to the ear that sent Reyes (14-4-3, 2 KOs) falling back toward the canvas.  The perfectly placed punch had Reyes seemingly out before he hit the floor.

“The one-two, one-two was the key to opening the door,” Fernandez said.  “The straight right hand is one of my best punches and I caught Reyes in the perfect spot.  I hope he is OK.  I feel that I am ready for the next level.  I’ll fight wherever there is an opportunity, but I believe the big fights are here in the U.S.”

Reyes was responsive but taken to the hospital as a precautionary measure.

Friday’s tripleheader will replay on Monday at 10 p.m. ET/PT on SHOWTIME EXTREME and will be available on SHOWTIME ON DEMAND® and SHOWTIME ANYTIME®.

The event was co-promoted by DiBella Entertainment (DBE) and AASHA Record Breakers.

About ShoBox: The New Generation