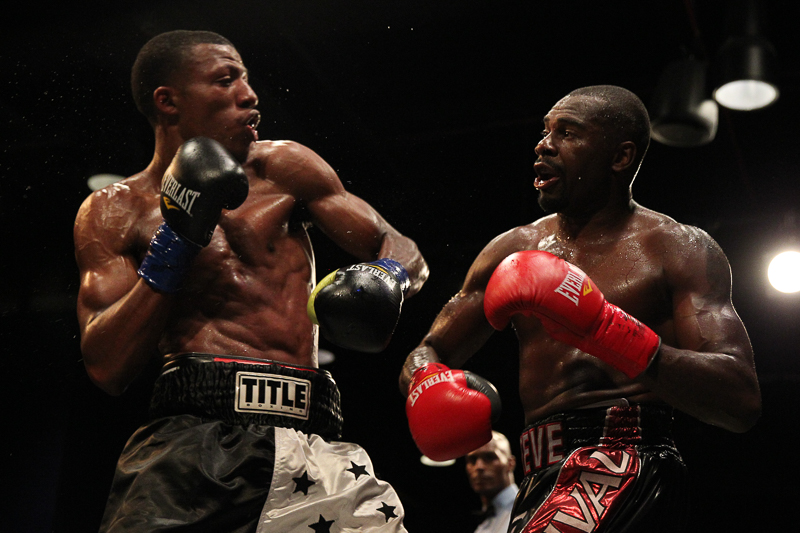 HOSTED BY NEW LEGEND BOXING AND DIBELLA ENTERTAINMENT
RESORTS WORLD CASINO IN QUEENS, NY
Queens, NY (9/19/15) – On Saturday night, New Legend Boxing and DiBella Entertainment returned to Resorts World Casino New York City with another action-packed nine-bout card for the latest installment of the popular International Fight Night series, proudly sponsored by Nissan of Queens.
In the main event, cruiserweight contender Alex Guerrero, 198, of Salisbury, MD, was shockingly upset by Atlanta’s Brian Howard. A straight right stung Guerrero halfway through round one and had him on rubbery legs. Howard, 195¾, landed a few more right hands to deck Guerrero, who quickly arose to his feet and took an eight-count. He was unable to recover, however, and Howard pinned him against the ropes with a follow-up barrage, forcing referee Harvey Dock to stop the contest at 1:53 of the opening frame. Guerrero suffered his first defeat, dropping to 12-1 (6 KOs), while Howard is now 11-1 (9 KOs).
Alicia “The Empress” Napoleon, 156¼, Lindenhurst, Long Island, engaged Latasha Burton, 153¾, Independence, LA, in a fast-paced brawl for three exciting rounds. Napoleon repeatedly tagged her foe with overhand rights, but Burton’s ring savvy and experience allowed her remain competitive. Often when Napoleon would force her way inside, Burton was waiting to launch her right uppercut. However, Napoleon’s constant pressure began to wilt Burton, who could not come out of her corner for the fourth round, resulting in a TKO verdict. The official time of the stoppage was 3:00 of round three, as Napoleon kept her perfect record intact at 4-0 (4 KOs), while Burton’s dropped below the .500 mark to 4-5.
Brooklyn fan-favorite Julian Sosa, 143½, earned his third pro victory, scoring a four-round unanimous decision over Las Vegas resident Jorge Soto, 146½, with three identical cards of 40-36. Now 3-0-1 (1 KO), Sosa staggered Soto with his straight right in round one and followed up by banging way at the body. Though he showed heart, Soto, 0-4, was hurt by every meaningful punch Sosa threw from then on out.
Irish southpaw Noel Murphy, 152½, used offensive bursts of combinations to quell the game plan of his crafty opponent Mack Babb, 151¾, of Jamaica, Queens, over the course of four hard fought rounds. Feinting Babb to create openings, Murphy often pressured his foe to the ropes and unloaded barrages. Babb’s best moments came when he was able to counter Murphy’s aggression with stinging straight rights. With scores of 40-36, 39-37, and 38-38, Murphy upped his record to 4-0 (2 KOs) winning a majority decision, while Babb fell to 1-6. The 21-year-old Murphy was a two-time National champion in his native Ireland before relocating to Yonkers, NY.
Brooklyn junior welterweight prospect Wesley Ferrer, 140¼, improved to 10-0 (5 KOs) after outpointing Luis Rodriguez, 143½, of Carolina, Puerto Rico, over six rounds. Ferrer snapped Rodriguez’ head back with a straight right in round one and continued to use that weapon throughout with success. The judges tallied 60-54 twice, and 59-55, all for Ferrer via unanimous decision. Rodriguez’ record dropped to 3-6 (2 KOs). In addition to winning the 2009 and 2013 New York City Golden Gloves championship and competing at the National Golden Gloves as an amateur, Ferrer was the 2012 New York Amateur Boxing and New York City Metro Tournament champion.

Over six frames, Bronx southpaw Chris “Golden” Galeano, 157¾, was very accurate with his punches, blasting the granite-chinned Colby Courter, 157½, with powerful hooks and stiff jabs. Galeano just could not miss as the brave Courter continued to come forward and eat whatever leather was heaped his way. A cut was opened over Courter’s left eye in the third. When Galeano shifted his attack downstairs, Courter did show signs of fatigue. In the sixth and final round, referee Vic De Wysocki felt that Courter had taken too much punishment and mercifully halted the action at the 1:08 mark, awarding Galeano, now 9-0 (1 KO), the first stoppage victory of his pro career. Courter, of St. Joseph, MO, dropped to 8-7 (7 KOs). Galeano won nearly every major competition during his amateur career, culminating by winning the 2013 NY Golden Gloves and 2013 165-pound USA National Championship, propelling him to a #1-ranking in the US.

In his DBE debut, the newly signed Canadian middleweight Steve Rolls, 161¼, of Toronto, expertly outboxed Tyi Edmonds, 161½, Meridian, MS, backing him up with a stiff and consistent jab. In round three, Rolls upped his offense, landing left hooks and overhand rights when in close. Edmonds, who tired down the stretch, was just not active enough, as Rolls went on to win a unanimous decision after eight dominant rounds. The judges tallied 80-72 twice, and 79-73, all for Rolls, who upped his record to 12-0 (6 KOs). Edmonds is now 5-3 (3 KOs). Rolls had a very successful amateur career, competing on the 2009 and 2010 Canadian National boxing teams, compiling an impressive 83-14 record in the process.
Landing counter hooks and straight rights, Brooklyn’s Marlon Brown, 145, worked hard to keep the aggressive Evincii Dixon off of him. Dixon, 145, of Lancaster, PA, did find the mark on occasion to which Brown proved to have a sturdy chin. Brown attempted to outbox Dixon over the second half, but Dixon’s pressure never waned. All three scorecards read 39-37 for Brown, who improved to 5-0 (2 KOs) by way of unanimous decision. Dixon’s record fell to 5-10-1 (2 KOs).
Dominican amateur superstar Carlos Adames, 148, now living in Brooklyn and training out of the famed Gleason’s Gym, demolished Rasheed Olawale Lawal, 146, Ventura, CA, inside the opening round to improve to 3-0 (2 KOs). Displaying very quick hand speed, Adames backed Lawal to the ropes and threw a series of flurries to the body to bring down his foe’s guard. Overhand rights to the temple followed and Lawal slowly fell to the canvas for a full count. The knockout came at the 1:52 mark. Lawal is now 1-2-1.
Website Admin