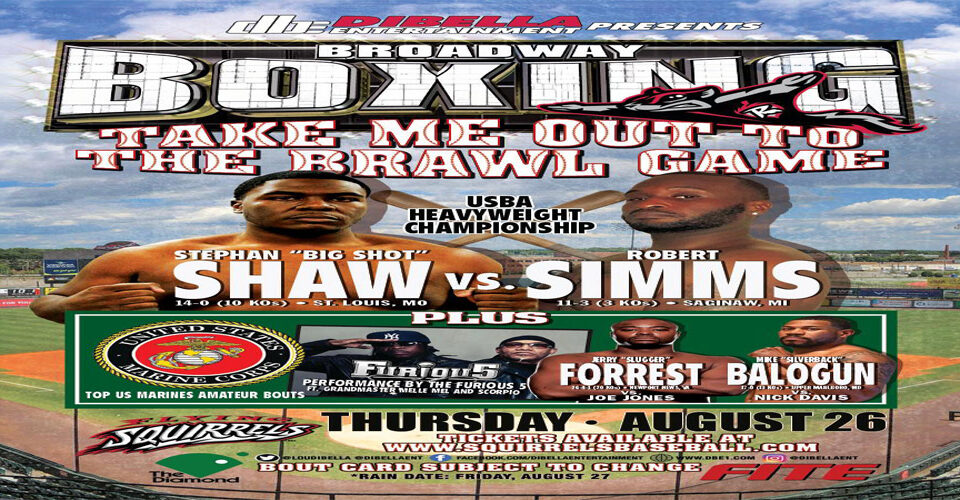 International BoxingHall of Famer Lou DiBella is proud to present “Broadway Boxing: Take Me Out to the Brawl Game”, an evening of world class boxing on Thursday, August 26, at The Diamond, home of the Richmond (VA) Flying Squirrels Minor League baseball team and Double-A affiliate of the San Francisco Giants. In addition to presiding over his boxing promotional company, DiBella is also the President and Managing General Partner of the Flying Squirrels. The event will be live broadcast globally on FITE.TV (8:00pm ET / 5:00pm PT).

The professional boxing action will be complimented by a trio of amateur bouts highlighting members of the cadet boxing team from the Marine Corps Base at Camp Lejeune in North Carolina, as well as a performance by hip hop legends and Rock and Roll Hall of Famers, the Furious 5 featuring Grandmaster Melle Mel and Scorpio.

“I’m thrilled to bring world class boxing to the Diamond in Richmond, home of the AA Flying Squirrels,” said Lou DiBella, President of DiBella Entertainment. “RVA’s first fight card in thirteen years will offer three explosive heavyweight bouts, talented up-and-comers, a clash of fierce ladies, and amateur action from US Marine fighters stationed at Camp Lejeune. Hip hop legends and Rock and Roll Hall of Famers, The Furious Five, featuring Grandmaster Melle Mel and Scorpio, will close the show. The Flying Squirrels have turned the Diamond into Funnville. August 26 will be something different, when the Diamond plays host to the sweet science. We’re going to have funn and go nuts yet again. Let us take you out to the Brawl Game!”

Tickets, which start at $20, are on sale now and can be purchased by calling the Richmond Flying Squirrels at (804) 359-3866, visiting their website at www.SquirrelsBaseball.com, or in person at The Diamond’s box office. The Diamond is located at 3001 N. Arthur Ashe Blvd., Richmond, VA 23230. Doors will open on the night of the event at 5:30pm, with the first bell of the amateur bouts at 6:00pm.

Headlining the event in a 10-round heavyweight clash, top undefeated heavyweight prospect Stephan “Big Shot” Shaw (14-0, 10 KOs), of St. Louis, MO, will face Robert Simms (11-3, 3 KOs), of Saginaw, MI, with the vacant IBF USBA Heavyweight Title at stake. One of the most talked about young heavyweights in boxing, the 6’4” Shaw returns to action following a dominant win last December on NBC Sports Network. The 28-year-old Shaw comes from a family of fighters and is a four-time US National amateur champion. The dangerous Simms has defeated two touted prospects in his last three fights and his losses have only come by way of split or majority decision.

Local Virginian fan favorite Jerry “Slugger” Forrest (26-4-1, 20 KOs), of Newport News, VA, takes on Jersey City, New Jersey’s Joe Jones (12-4, 9 KOs), for the vacant IBF North American Heavyweight Championship, scheduled for 10 rounds. The heavy-handed southpaw earned his nickname “Slugger” from his grandmother after he survived complications from his birth. Forrest, whose father is a master chief petty officer in the US Navy aboard the USS Nimitz, was employed as a nuclear electrician for 10 years, working on submarines and aircraft carriers at the outset of his boxing career. He is coming off of a dramatic brawl on February 27, 2021, in which he overcame three knockdowns to earn a hotly contested draw against China’s unbeaten 6’6” Zhilei Zhang. Born in Lynchburg, VA, Jones is looking to keep up the momentum from his recent win on July 24, 2021.

Fighting in an eight-round heavyweight tilt, southpaw Mike Balogun (17-0, 13 KOs), of Upper Marlboro, MD, will battle Nick Davis (6-2, 4 KOs), of Atlanta, GA. The athletic Balogun is a former college football standout who started for the Oklahoma Sooners before playing in the NFL for three years. The former San Francisco 49ers linebacker has won his last three starts by knockout.

In a six-round matchup of junior lightweight prospects, Joshafat Ortiz (7-0, 4 KOs), of Reading, PA, squares off against Stevie “The Answer” Massey (13-1, 9 KOs), of Charlotte, NC. The 25-year-old Ortiz will be making his first start of 2021, while Massey hits the ring looking build off of his recent victory in May against Carlos Marrero. Ortiz was born in Juana Diaz, Puerto Rico, but moved to the US at age four. He was first introduced to boxing as a child, as his father, uncle and brother were all amateur fighters. Ortiz compiled an amateur record of 42-7, and was a three-time Pennsylvania Golden Gloves champion.

Should a rainout occur, the event will be rescheduled for the following day, Friday, August 27, 2021.